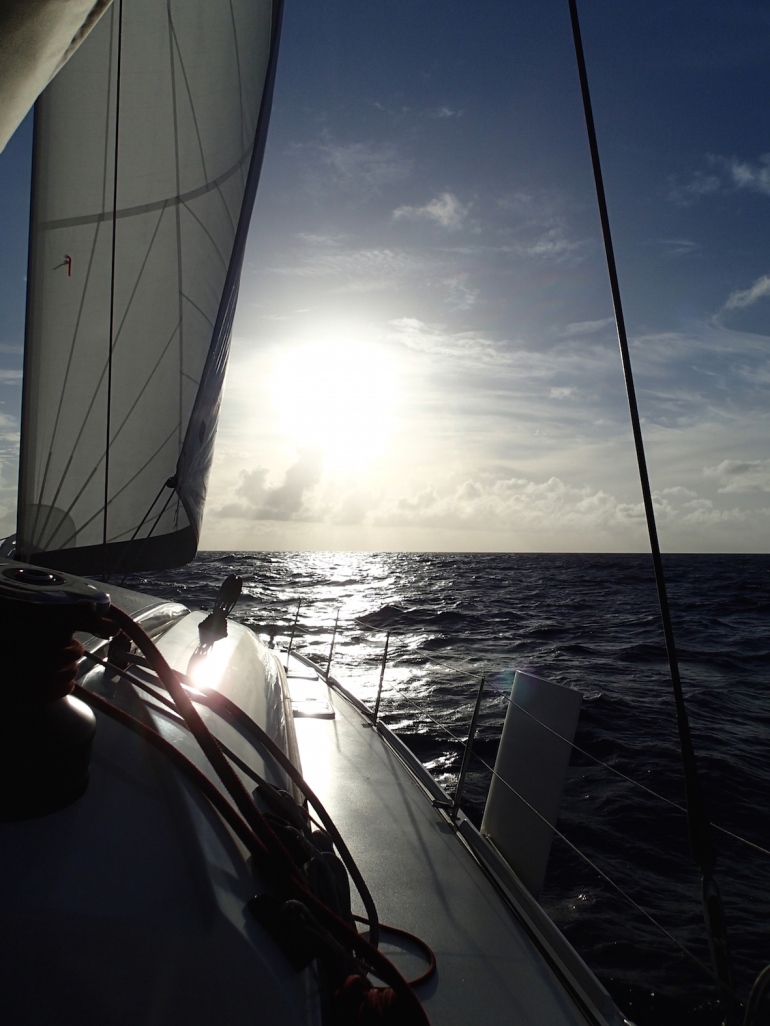 Bit of a delayed post, again.  We have been offline for weeks.
So after all that provisioning and preparation, we did not in fact set sail on 13th December, well we did, but not far. As we left the bay that afternoon I engaged the autopilot and found it was not working, with a message I had not seen on the screen before: ‘FAIL’, that doesn’t look good. Not keen on hand-steering 400 miles downwind, we dropped sails and motored into Prickly Bay.  Fearing the worst, Dawn performed the Furuno analytical tests which concluded again with the rather terminal sounding: ‘FAIL’. Hmm, If something is seriously wrong we may need a Furuno technician! Spare parts shipped in!  At Christmas time!  We could be stuck here for weeks! The next morning we were very happy to find a blown 10A fuse.  Simple to replace as long as you’re carrying a spare, which we weren’t.  But of course our friends on Mr Curly were, thanks for the spare part delivery Richard! That was it, pilot fixed, ready to go again. (After a quick trip to Ace Hardware to stock up on spare fuses of all sizes.)

Go West
So we sailed away from Grenada on the afternoon of the 14th December with the autopilot purring quietly to keep us on course. There is often a moment of joy on board Escapade as we sail over the horizon again, out of sight of land and ships. The speed of the boat and the sheer freedom of being out there can lead to spontaneous singing.  And dancing.  Our lure soon attracted a beautiful yellowfin tuna which was fishmongered into fillets for the fridge and ceviche for supper.  We sailed SW at first to avoid the wind shadow in the lee of Grenada, then Northwest again to sail far off the Venezuelan shore. Yachts are very concerned about sailing close to this coast with several recent reports of armed boardings of sailing boats by Venezuelan pirates. As the sun set, the mood on board changed.  We have been sailing on night watches together for many years now, but the first night still takes a bit of getting used to.  After dinner we went up to the trampoline and lay face down watching the green sparks of phosphorescence flash by.  As I stood up I saw a flash and found a couple of stranded flying fish which would be appearing on the breakfast menu in a few hours. 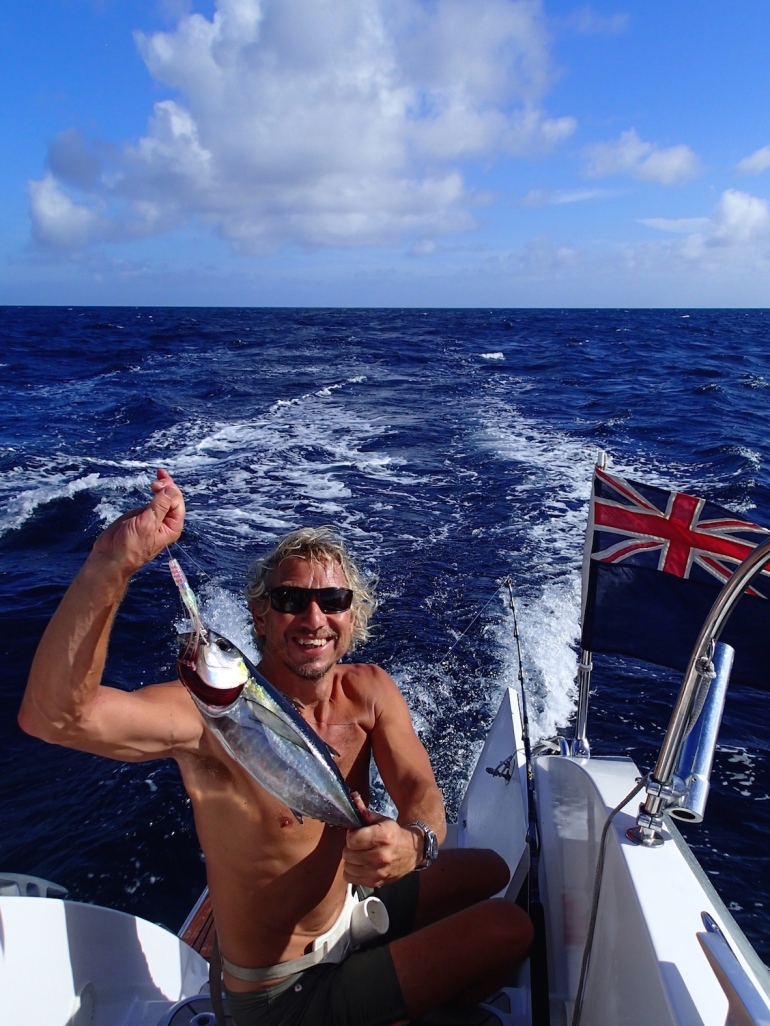 Notes from a night watch
I take the first watch and settle in to the warm tropical night, alone on deck. At 20.30 the sliver of new moon sets in the West and the starry dome is just mesmerising.  A perfect dark sky with no moon or cloud, I turn off the nav lights for a while, to enjoy it all.  The only light pollution is the phosphorescence which is now ridiculously bright with fiery light streaming out behind in our wakes.  I imagine a whale’s eye view of Escapade from below, two green comets streaking across the black surface.  This time last year we had a similar experience on passage from the Canaries to Cape Verde, now we are in new waters, away from the Eastern Caribbean Islands that have become familiar, this is the furthest West we have sailed so far.  I wish on a shooting star which is going our way. For me this is still strong magic, it feels like a view of the world that few people ever experience.  The boat is perfectly trimmed and just eating up the miles, requiring nothing from me. Dawn is asleep and I’m free to enjoy the night and this view of the universe.
There is a simple, elemental joy out here, sometimes when I go up on deck it feels like we are sailing through space, floating in the blackness.  Actually I am moving across the Earth in my own personal disc of wilderness.  The horizon is maybe 20 miles away so Pi-R-Squared makes that disc about 1200 sq miles of Caribbean Sea with nobody in it except us and a few billion sea creatures.  Some of those want to join me, I am hit in the chest by a flying fish while sitting at the helm, he seems unharmed so I scoop him up and re-launch him.  Below our hulls the sea bed is 2km down and above the sails the galaxies slowly rotate.  The occasional shooting star has now upgraded to a full-scale meteor shower and I have run out of things to wish for.  They are raining down, everything from multiple short white scratches on the dark sky, to great balls of fire leaving long trails.  By now I’m wondering what might have been in my Grenadian coffee.  I have since found out that this was the ‘Geminids’ putting on a show.  (A well known annual astronomical event, with meteorites arriving from the direction of the Gemini constellation.)  There can be no better place to see it.  I think of all the sailors on ships through the ages who must have experienced nights at sea like this, but tonight it’s all mine.  Escapade is flying through the darkness at 10kts, sailing towards the tiny islands of Los Roques, with the constellations turning above me like the hands of a clock.
Daybreak arrival
That was a pretty special night watch for me, but they are not all like that.  Dawn took over at 02.00 and had cloud, rain squalls and container ships to dodge.
We sailed all through the next day and night, now steering SW again on Port tack and heading straight for Los Roques.  We measure the distance left and try to plan our boat speed for an 8am arrival.  Escapade is cruising at 10-12 kts on a broad reach and surfing at 15+.  Too quick, we don’t want to arrive in the dark.  We pull down the second reef and try to calm her down.  We had a worrying hour or so around suppertime when we were buzzed by an unidentified vessel shining very bright searchlights and seeming to be interested in us.  We have since seen a Venezuelan Guarda Costa ship and think it may have been them, but it’s easy to get a bit jumpy in these waters at night.  After a fresh tuna supper I have a snooze and we settle in to our second night at sea.  I wake up to find we are surfing at 15kts again, too fast for a daylight landfall.  I spent the rest of the night trying to slow the boat down.  Dawn had assured me that first light was at 05.15 so anytime after that would be fine to approach the islands.  By 0400 we have 2 reefs, I have rolled up the jib and the boat is still sailing at 10kts+!   I have also decorated the cabin with our Spanish paper garlands from last year as today is Dawn’s birthday.  At 05.15 we are both on deck and bearing down on Los Roques fast.  It is still very dark.  Then we realise there is a time difference.  We have sailed so far West we have changed time zones! (This is also the first half-hour time zone I can remember adjusting my watch to, a bit strange, but the first of many strange new experiences in Venezuela)  It is just light enough to see as the loom of the village lights silhouette the hilly little island of El Gran Roque, we round up off the beach and drop the hook in a different world.

Stay tuned for the full Los Roques story coming soon while we still have wifi!! 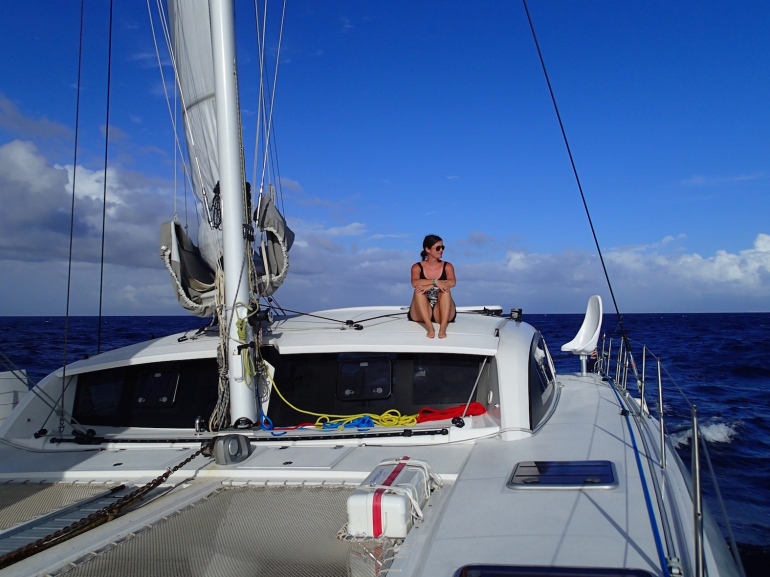