Back to the boat.  I always feel we have neglected the boat when we’re away, although she was well looked after, with Jemima boat-sitting part of the time we were gone.  This is the first time we have left Escapade afloat, on a mooring.  I nervously check all the systems, pumps, engines, watermaker, instruments, everything comes back to life.  Phew.  Last few items on the ‘to-do’ list then we can sail away to the islands.

Tahiti is hot now, high summer, it’s also wet season, so it’s pretty steamy.  We are keen to escape to a breezy anchorage.

But first, we are provisioning like never before, with the possibility of five months on board before we see anything like the Carrefour in Tahiti again.

Our research tells us not to expect much in the way of groceries in the Marquesas and Tuamotus, so we are filling the boat with goodies this week. 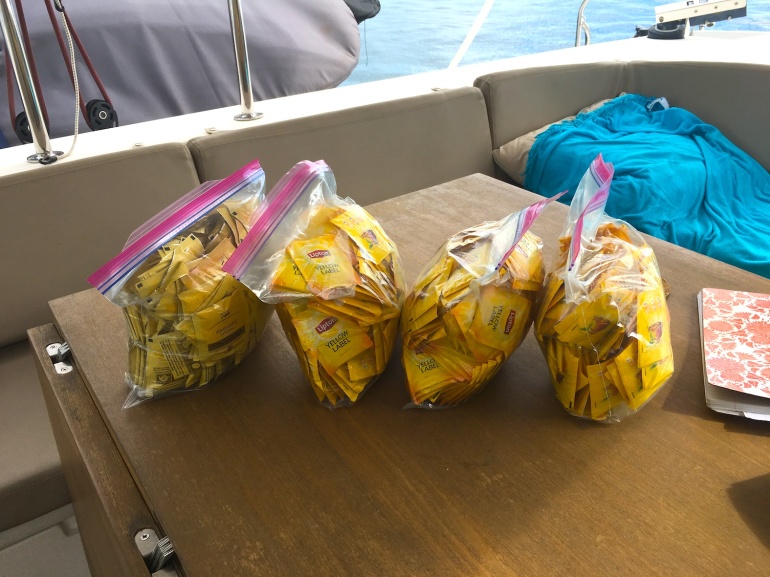 Multiple dinghy-fulls of French epicerie.  It goes on a bit, then there’s a Sunday 5am trip to the main produce market of the week in Pape’ete, fruit and veg stalls bursting out of the covered market into the surrounding streets. 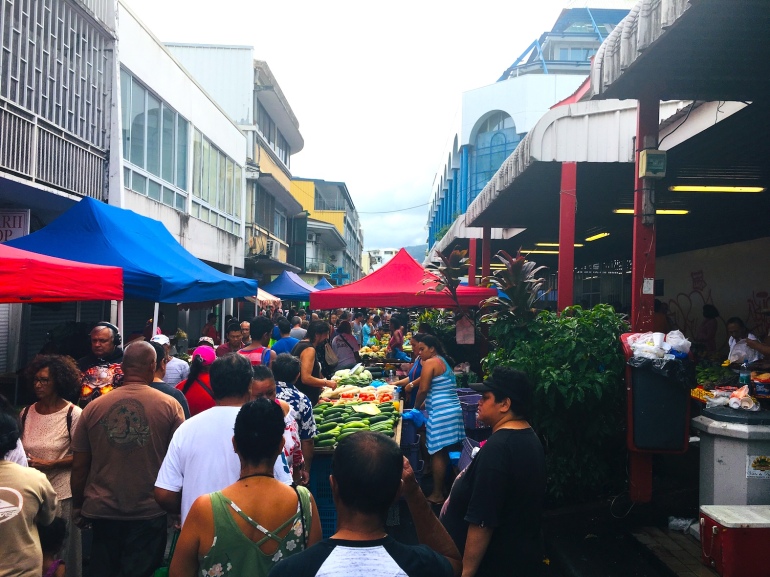 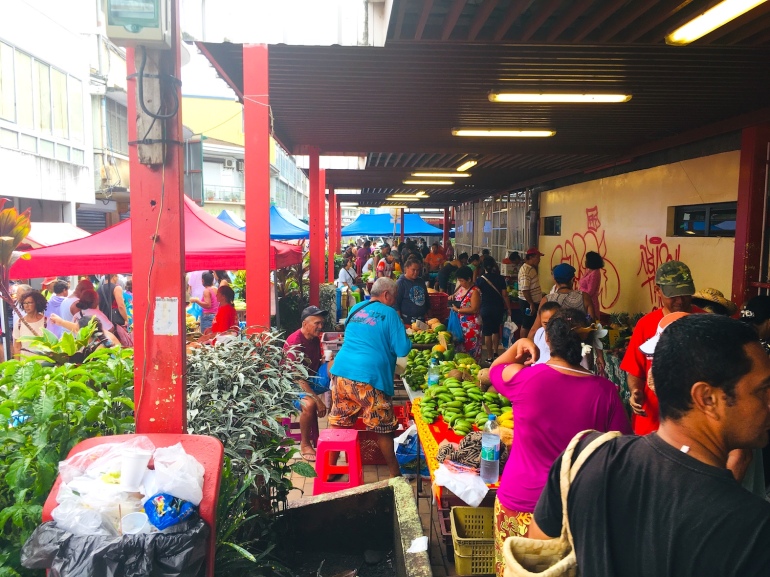 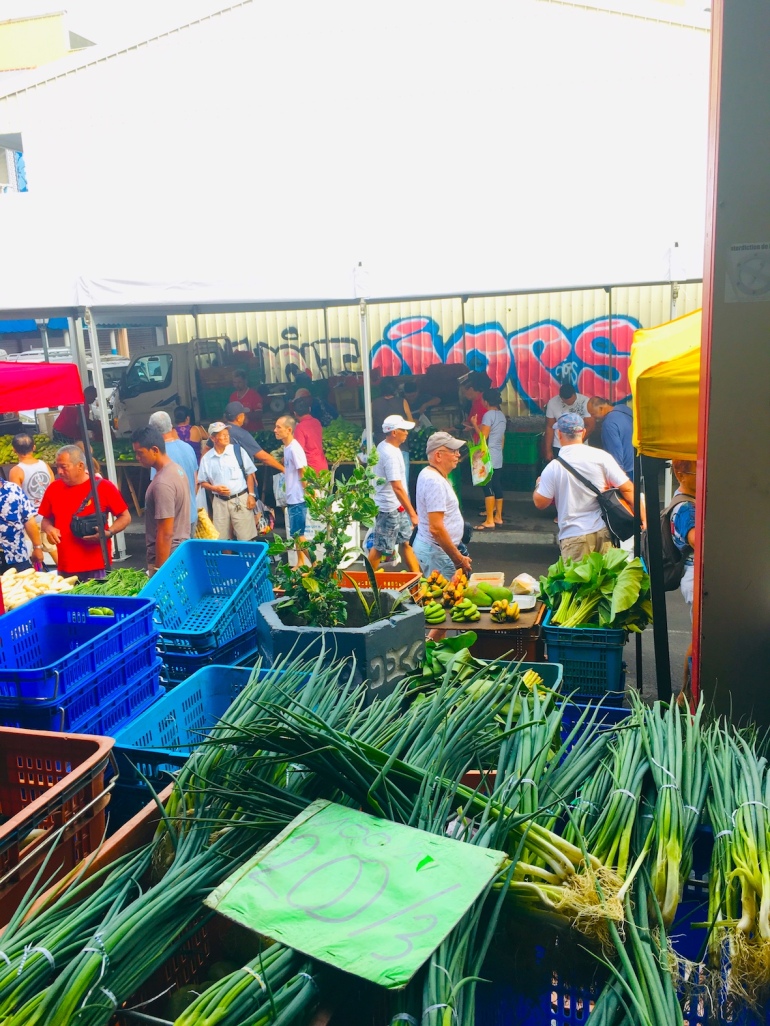 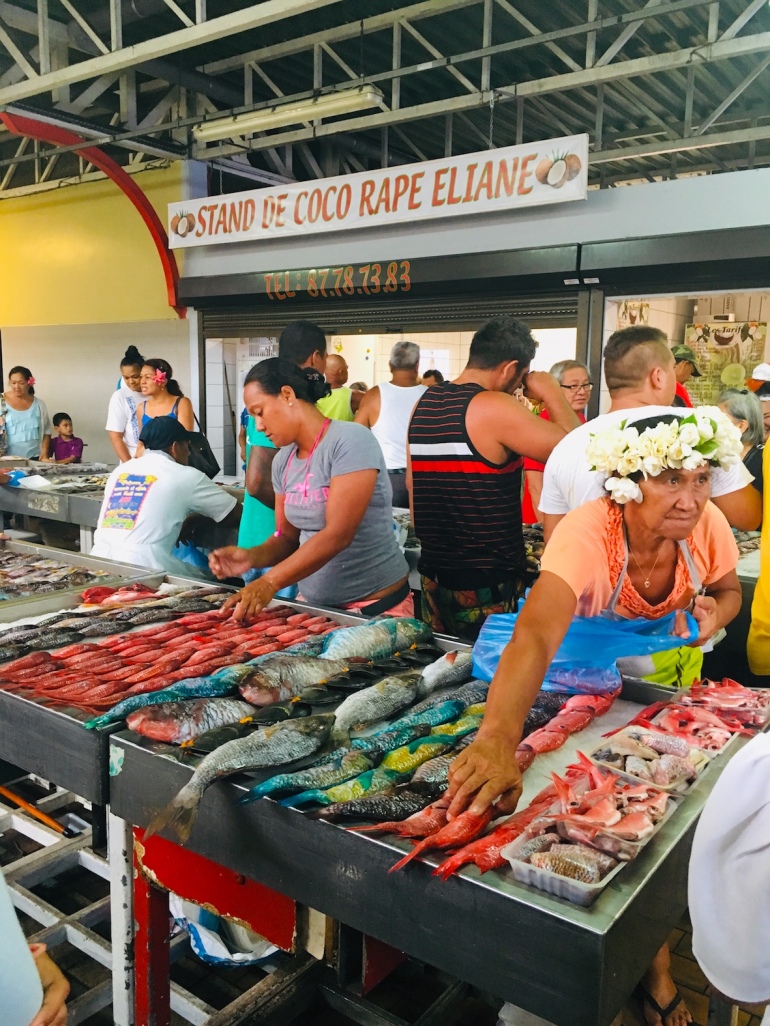 We load up with fresh stuff straight from the local farms, hard green tomatoes, avos and papayas that should last for weeks.  Finally we’re ready to leave, pay for the mooring, fill the fuel tanks and get away, can’t wait.

Then we realise the depth sounder has suddenly stopped working.  But it was fine two days ago!  Turn it off and turn it on again, even that doesn’t work.

We find a Furuno dealer in Tahiti and call him, he may have a spare transducer, have to check.  This could turn into a long delay, we can’t leave without a working sounder, he may have to ship the part in from Japan, get it through customs, Christmas is coming, we could be stuck for weeks!  Finally he calls back.  He has found one of our model in stock.  We go straight to his office in Pape’ete to grab the transducer and back to the boat to try it.  It works!  Great, that means we can leave at first light tomorrow.

We drop the mooring lines and slip away.  Escapade has been in captivity here outside Marina Taina for 4 months.

Out through the pass at Pape’ete and away.

I just love this feeling at the beginning of a new season. Self sufficiency, the boat stuffed with everything we need and 5 months ahead of us to play with, whole new archipelagos to explore. I am dancing round the boat.

I had suggested to Dawn that we first visit Tetiaroa, only 30 miles away.

It was the location for the 1960 film ‘Mutiny on the Bounty’, starring Marlon Brando who fell in love with the South Seas dream whilst filming there.

Brando came back and bought the island in 1966 and now there is a 5* resort ‘The Brando’, where movie stars still fly in for lavish birthday parties.

Apparently Barack Obama checked in for a month to write his memoirs and do a bit of kiteboarding in the lagoon.

Anyway I kind of hinted that we might stop there for dinner as a birthday treat for Dawn, but I hadn’t done the research very well.

It’s an atoll without a pass, so you can’t sail in.

We couldn’t find anywhere to anchor and the two ‘Brando’ moorings were being pounded by a big swell.

We had to sail on by. (Tetiaroa, no fun atoll!)

So that birthday treat was cancelled, and replaced by two days and nights at sea. Sailing to windward!

But it’s great to be out here! Testing ourselves again.

Andromeda rising, a multi-colour flashing disco light. Galaxies and planets, a meteor shower, all new to me again after a few months with no night watches.

I think it’s healthy to have some extended starlight exposure and a long solo watch allows plenty of time for reflection.  Restores perspective.

We’re sailing for the Tuamotus. An archipelago 1000 miles long, hundreds of low lying atolls with coconut palms as their highest point. Before GPS it was known as The Dangerous Archipelago, as so many vessels were lost on reefs spotted too late.

The old Polynesians navigated these waters without instruments, reading their distance from an atoll in the interference patterns in the waves which had refracted round it, the flight patterns of the white fairy terns, who don’t stray further than 15 miles from land, and spotting the green sky, reflecting the colour of the lagoon up onto the base of white clouds above.

Our first green cloud and fairy tern were above Tikehau. (Pronounced T.K.O, and it is a total-knock-out of an atoll).

We came here by accident really, we were getting a bit bored with the long beat up to Rangiroa, and there was Tikehau, the pass just a few miles to leeward, a tempting detour.  We ran off downwind, shot through the technicolour pass and into the calm lagoon.

Time to rest up after two nights at sea and prepare to celebrate Dawn’s birthday! 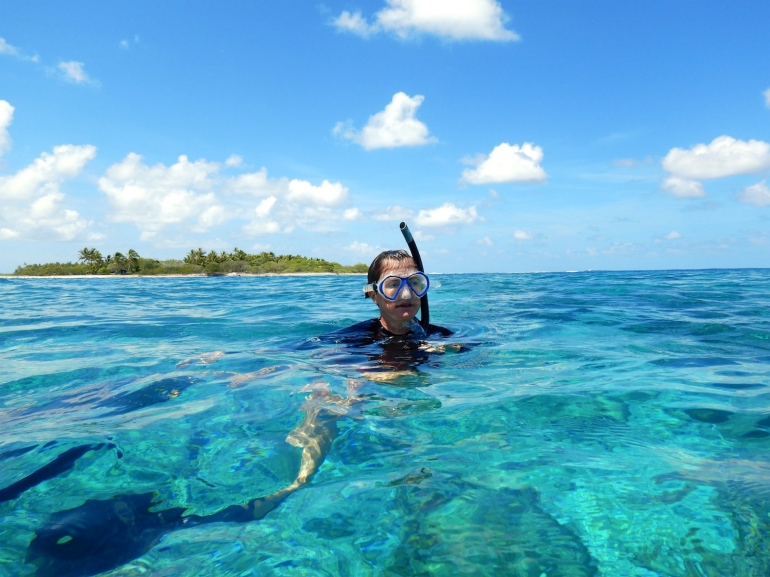 Here we are in the Tikehau atoll. Our first Tuamotu. If you could see us on Google Earth and zoom out, we’re in a blue lagoon about 12 miles across, studded with a few tiny islets and coral heads. The lagoon is surrounded by reef, along which are set a string of tiny islands, ‘Motus’, forming a complete circle except for one pass, deep enough to sail through. Inside the atoll the water is about 15m deep, beyond the reef is the vast Pacific, deep blue, and 3000m deep. We are in a calm lake in the middle of the ocean, anchored off a perfect coconut fringed motu. Black-tip reef sharks cruise by the boat.

It’s a pretty remote spot, but we are living well. We only left Tahiti a week ago, so the boat is still groaning with fine French foods. Today’s cheeseboard features a ripe Tomme de Savoie and a slightly sweaty Comte (Thinking of you Monty).  And of course the cellar is well stocked.  But the bad news is that we have just eaten the last of the lettuce.

The chartplotter shows a marked channel from the pass to the village of Tuherahera.  Beyond that the interior of the atoll is a blank screen. No depths, no rocks, nothing. About 100 square miles of uncharted lagoon.  But really, you navigate here by eye anyway, as long as the sun is high so you can see the rocks and coral heads just below the surface, chart or no chart.  So off we went to explore, dodging the reefs to our first stop at ‘L’Ile D’Eden’.  A motu that has been run by a Christian sect since the 90s, following the teachings of their Taiwanese prophet, returning to a simple life and growing their own food in a little island paradise.

We dropped the hook and went to visit.

Three families live on the island, including seven lucky children running wild. We were shown around by Paul from Malaysia and Sheila from Tahiti, the local Tom and Barbara Good, who tend the organic farm.

The animals eat coconuts and produce meat, eggs and fertiliser.  The growing areas are spaced between plantings of casuarina and moringa bushes whose roots replenish nitrates in the soil. 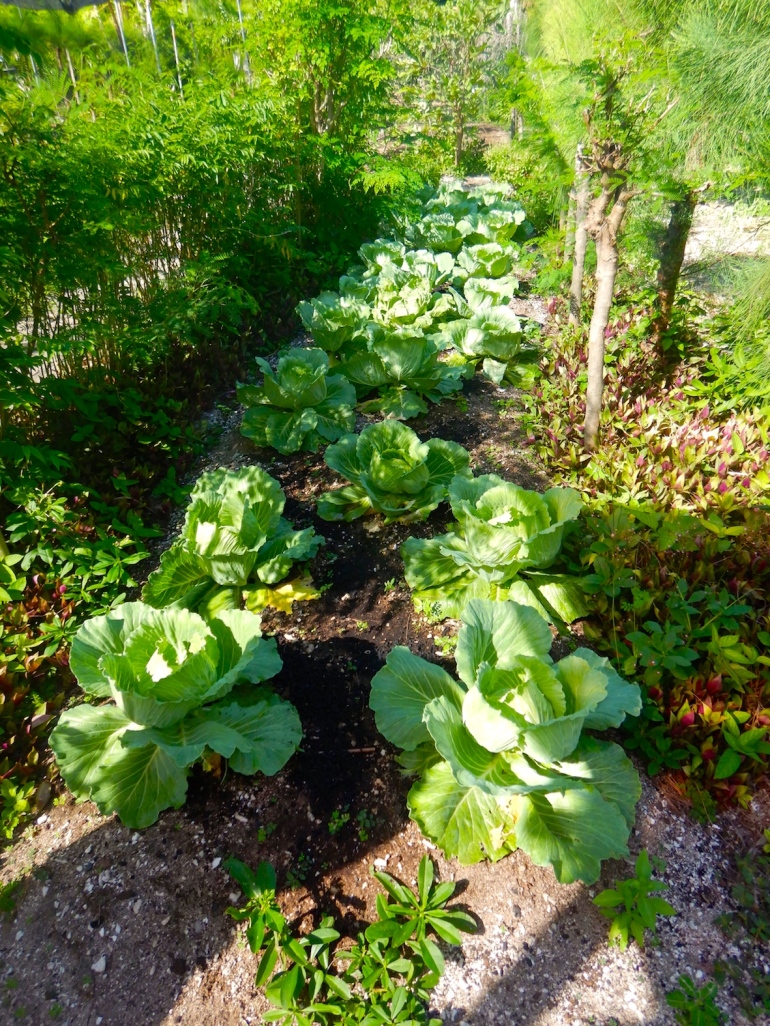 There is also a hothouse for drying out delicious sea salt.  A remarkable project, given that so little is grown anywhere else in the Tuamotus, except coconuts. Mainly because there is no soil, unless you create your own, as they have done here.

The motu is a dot of sand surrounded by salt water.  They collect rainwater and have recently installed a few solar panels.

Paul explained that the coconut trees are still at the heart of it all. The only way they can grow bananas for example, is to dig a huge pit in the sand and fill it with coconut husks and compost before planting.  Coconut husks are the fuel for all cooking. They can feed the livestock on shredded coconut leaves and meat from the nuts. The also drink the water from the nuts, squeeze the ‘lait de coco’ from the meat then produce coconut oil by cold fermentation.

Paul told me he does most of the work himself, tending the farm which would easily produce enough food for 50 or more people.  They take their boat to the nearest village each week to sell surplus produce. He also has time for a bit of fishing and spear-fishing. I think they have a healthy diet!

We left in our dinghy, gratefully loaded with fresh cut greens, berries, radishes, eggs, dark honey from the coconut flowers, bunches of moringa leaves and basil.

Out into the deserted lagoon again.

It sits surrounded by its own reef, with a plateau of shallow water and white sand to dig your anchor in to. 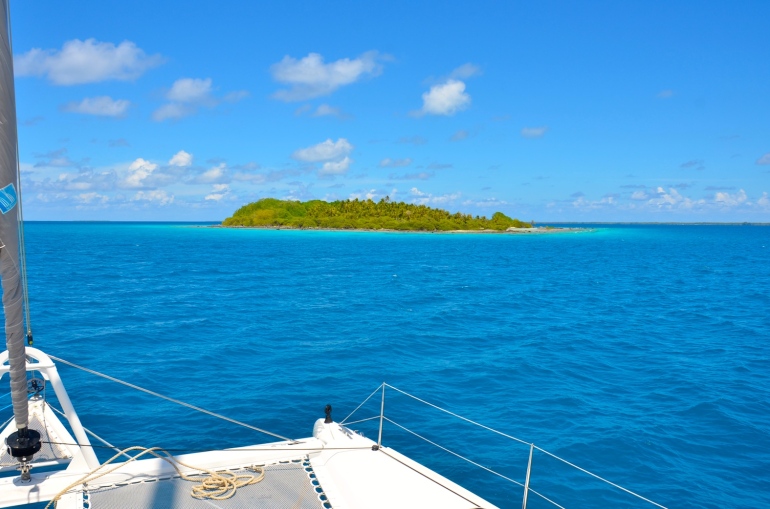 Just us, the birds and the fish, in a shimmering turquoise halo around the motu. Bath-warm water.

We anchored thinking it could be a good spot for lunch. Still here five days later.

A huge full moon and the longest day, the Austral summer solstice, a good time to be on passage, short moon-lit nights, but we’re not ready to leave.

The magic is strong here and we feel like leaving the anchor buried for a few more days.

So that solstice gives us daylight from 0500 to 1900.  The trades seem to bless this part of the lagoon with a constant breeze, 10-15kts. All day, every day.

Not enough for regular windsurfing, but on a hydrofoil… 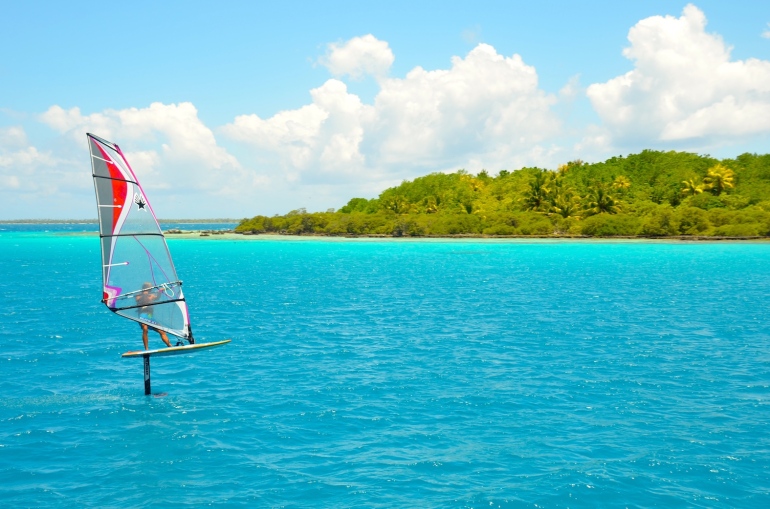 Yes new toys on the boat, I brought a foiling board with me from Maui, and the toy locker is now enhanced with a big bag of Slingshot foils. (Thanks Casey)

So I am zooming around the motu, faster than windspeed, surprising all the birds.

Probably the first circumnavigation of Puarua by windfoil.  Birds flying along side, sharks darting beneath, slaloming between coral heads and turtles, another foiling heaven. 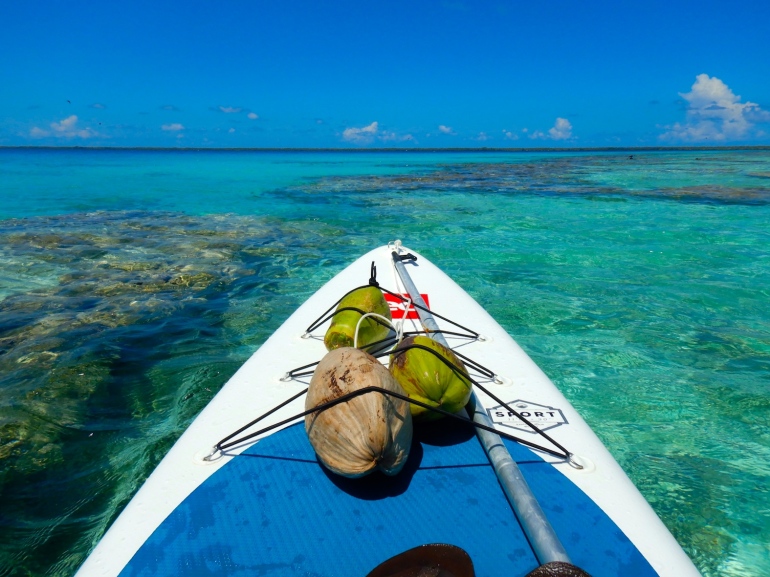 We take a paddle board in to explore the island and scrump some coconuts. Across the reef flats, where a coral is growing in large circular formations, but bright purple. 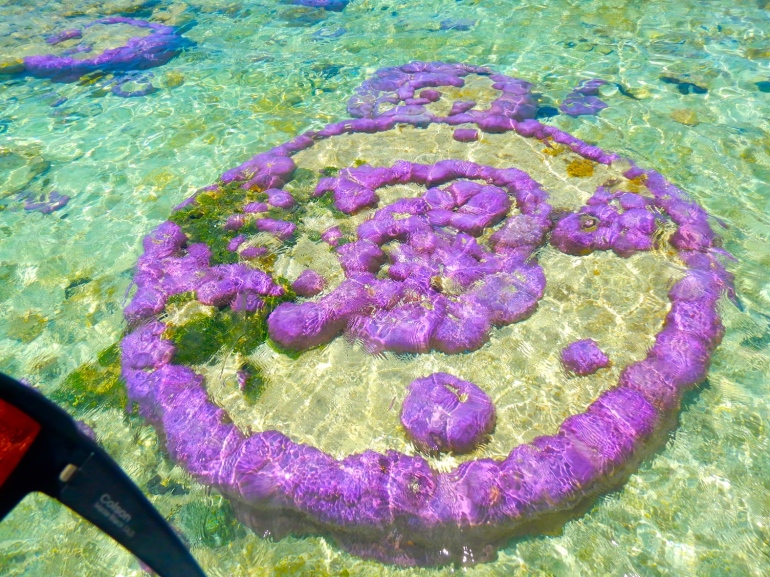 Or through polarised lenses, shocking pink.

Ashore there are roaming crabs, nesting pairs of white fairy terns, but the place belongs to the Black Noddies.

There are thousands of them!

Every tree is decorated with a dozen nests, a Noddy sitting on an egg in each one.  All squawking their heads off.

Then the occasional ball of white feathers sitting in its nest. A red-footed booby chick, like a big white fluffy muppet, about a foot tall! 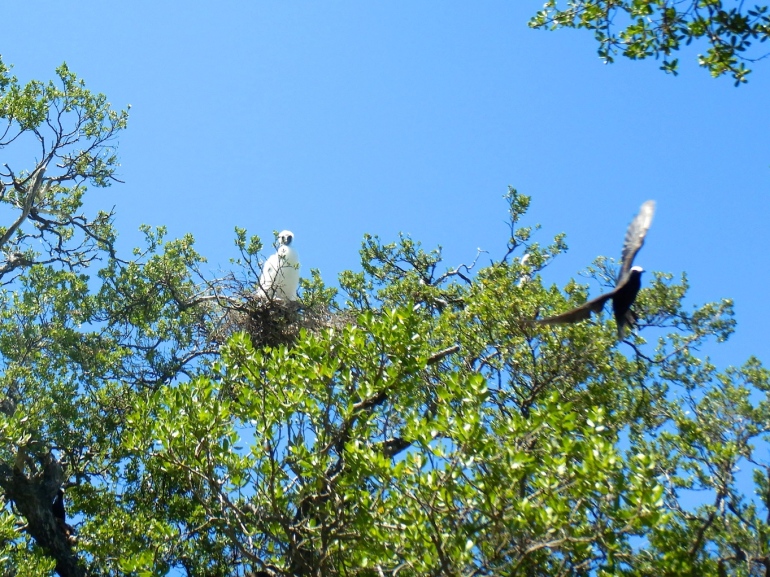 So our quick detour to Tikehau distracted us for 10 days, time to move on again.

On Christmas morning we sailed back out through the pass and the palms of Tikehau slipped back in to the sea astern. 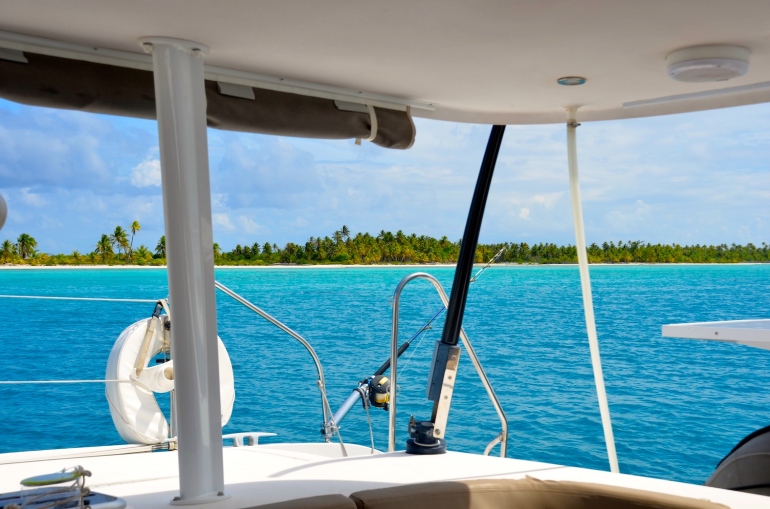