Brice and Genevieve made the long trip from Santa Cruz to Tortola to join us for a few days relaxation and sailing in the sunshine.
They arrived on the evening of the full moon, so naturally we had a drink at Trellis Bay where the Full Moon festivities were in full swing.
Then it was back to Escapade where we were preparing for the last day of the BVI Spring Regatta. Their first sail with us was an intense day’s racing.
Not too relaxing so far!
Did we mention that we won the regatta? (See previous post) So our new guests were required to join the celebrations at the closing night of the event.
Brice found himself on stage with the rock band in front of a substantial crowd of revellers playing solo on an electric piano.
After the regatta we were free to sail away for a few days and explore some new places. Still so many places we haven’t visited here. We started at Sandy Spit where B & G were able to swim, snorkel and windsurf. We had a fire-risk barbecue on board under the stars, then marvelled at the squadron of squid swimming past, glowing bright green and looking up at us through big luminous eyes.
Next was a quick trip to the lovely Cooper island where our snorkel trip was blessed with a large eagle ray gliding past us.
Then an early start for the 25 mile sail north to Anegada. Brice took the helm and steered Escapade at high speed on a close reach. Our first trip to the remote, northernmost BVI.
A wild, undeveloped, sparsely populated island famous for its reefs, wrecks and lobster. Anegada is to the Virgins what Alderney is to the Channel Islands!
We had heard of good surf and windsurf conditions at West End, it was only a couple of miles from our windy anchorage, so Brice and JP set off on wave boards to sail downwind to the break, slaloming between turtles.
The rumours were true. The swell was wrapping around the reef on the deserted westernmost tip of the island. Side shore breeze, fun-size waves and nobody else in sight. A magic session, one to be added to the long history of wave seeking adventures shared with Brice over many years.
The hour long slog back to the boat against wind and current was less fun, but so worth it. We had plenty of appetite for the wonderful local lobsters at Neptune’s Treasure.
Keen to see more of Anegada, the next day we procured a vintage 4wd rental, loaded it with toys and set off along the dirt tracks of the North Shore. The coastline is protected by a long barrier reef with lagoons inside and beautiful deserted beaches. We liked Cow Wreck bay (a ship carrying a cargo of cows was wrecked on the reef, several of the cows survived and made it ashore. We saw some of their descendants roaming along the beach one morning) and Loblolly bay where we found a channel in the reef and sailed a windsurf session.
Next morning was another early start with Brice at the helm, a fast sail south, past Necker Island and in to the Gorda Sound. Brice windsurfed across the impossible spectrum of blue water colours in Eustacia Sound where we snorkelled the reef and picked some choice conch shells from the seabed.
Back on board it took four of us about an hour to remove the meat from these amazingly strong shellfish. Cooked in butter and garlic they were well worth the effort. We have since done a bit more research on how to de-shell them!
Time was running out so we sailed back past The Dogs and in to our old haunt at Trellis Bay. Dinner with our friend Caroline on a little island in the bay at The Last Resort, last night on board for Brice and Gen. There was just time for an early morning surf at the lovely Josiah’s Bay before the flight. It was flat but great fun was had trying to ride the tiny turquoise waves.
We waved them off to San Juan on the first leg of their long ride home.
It was supposed to be a relaxing trip but they may have left more tired than when they arrived.
Great to sail with you two, thanks for coming! 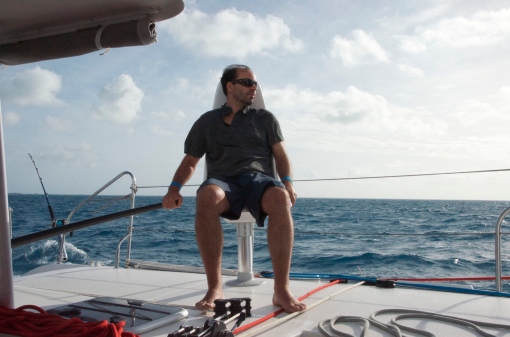 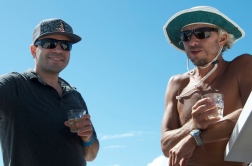 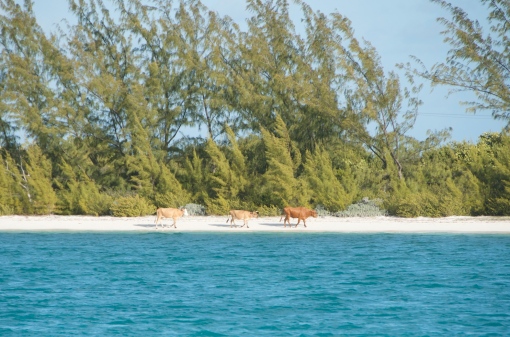 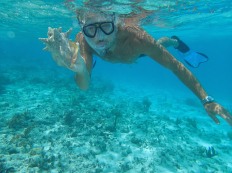 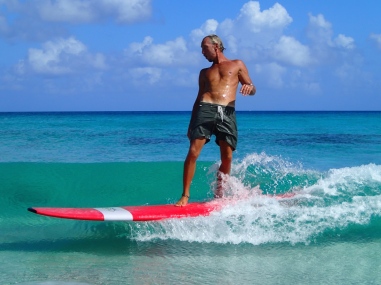