The last few days in Grenada were busy socialising with our new sailing neighbours from Switzerland and Guernsey, windsurfing at Adam Island and running with the local Hash House Harriers.
This was our first HHH experience. They run at ankle-breaking speed across rocks and tree roots, through jungles, rivers and mountains, following a trail of paper route markers along the way, there are several ‘false trails’ which lead you up dead ends so you have to retrace your steps to the real track, adding considerable mileage! A wild, semi-organised mass run followed by cold beer, various HHH rituals, local street food, loud music and dancing. Seems to be more about partying than running (their T-shirts say ‘Drinkers with a running problem’) but what a great way to experience the rural interior of the island and see the locals having lots of fun.

We enjoyed Grenada, but it was time to get that hook up again. We snuck out of Prickly Bay in the moonlight at 3am and sailed South with 2 reefs in the main on a fast reach for Trinidad.
We passed between oil and gas platforms and the spectacular mountains of Trinidad appeared on the horizon. A large pod of dolphins arrived to welcome us as we approached the islands of the Bocas De Dragon which separate Trinidad from Venezuela. We pass through the Boca in to the Gulf of Paria. Just around the corner is the harbour of Chaguaramas, Escapade’s home for the summer.

Chaguaramas is a busy commercial  port, we anchored amongst cargo ships and support vessels for the oil fields. It is also a favourite spot for weekend party boats loaded with amazing sound systems. Trinidad is loud! It is also hot. But we are here because it is a great place to leave the boat for the hurricane season. The shore is lined with yards full of yachts doing the same thing.
Escapade was hauled out for the first time since we launched her last July. Then began a long, hot week working on the boat. A few running repairs, preparing her for storage, maintaining engines, watermaker, outboard, removing sails and anything else that can be stowed out of the sun. Did I mention that it was hot? After 6 months in the tropics we thought we were acclimatised, but this is no breezy anchorage! When the sun beats down on the boatyard the temperatures soar. Hot work. I’m sure many readers of this blog will be very happy to hear that we sweated through a long week of hard graft! We drank gallons of coconut water trying to stay hydrated. Finally we reached the end of the list of chores. Escapade is cleaned from stem to stern and is sitting safely ashore until we return in November.
We even washed the salty bag of courtesy flags hoisted in all the countries visited so far.

As we cleared out Dawn was asked to leave the customs office and return only when ‘appropriately attired’.

We were keen to see beyond the boat-town of Chaguaramas and we have time to explore a little in Port of Spain (loud!), eating amazing food from the melting pot of Trinidad cuisine. Caribbean, Indian and Chinese flavours, great street food and a big city feel we haven’t had for a while. Trinidad is much bigger than the other Caribbean islands we’ve seen lately, with a more diverse racial mix, more industry, commerce and louder music!

So that’s the end of Escapade’s first sailing season. Thousands of miles, dozens of islands, so many good times and lots of new friends.
We are on our way back to Guernsey (scenic route via Miami and Ibiza).

We have already booked the travel-hoist to re launch 27th November. That gives us a few months to make our sailing plans for next winter.
But you know how we are with plans. 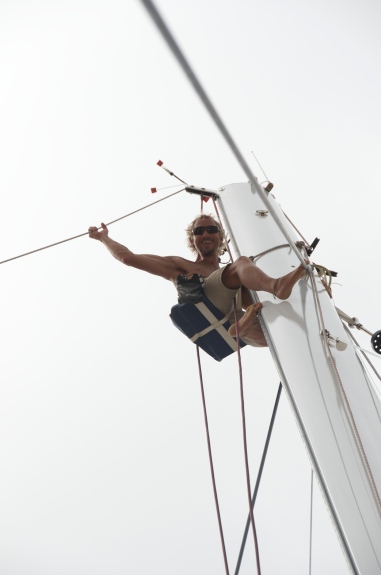 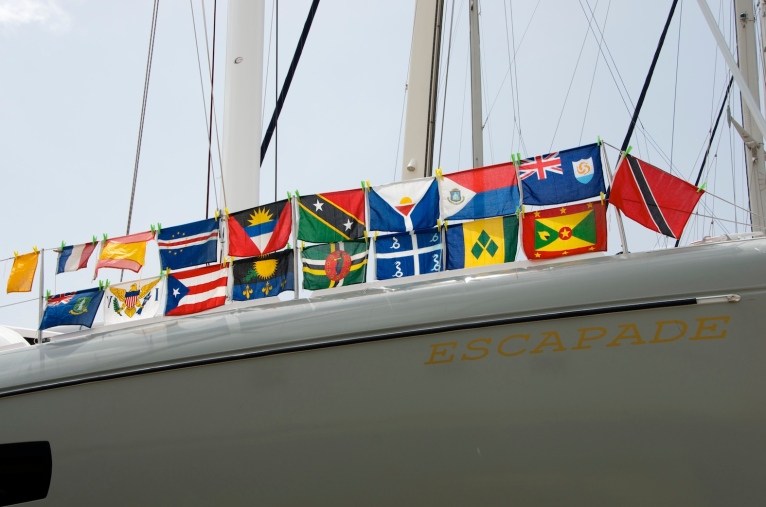