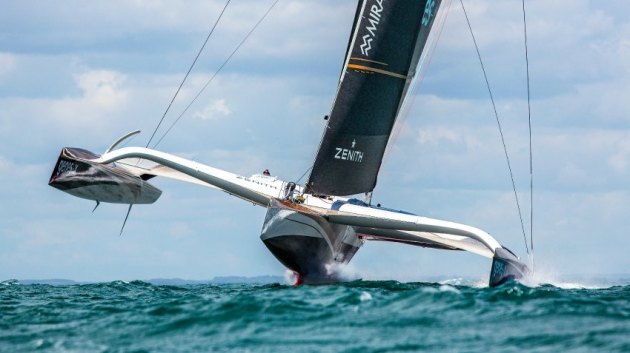 Last week I found myself at the helm of a multihull sailing yacht off the South coast of Brittany.

The sun was shining and the instruments told me breeze was blowing at about 14kts.
Our boat speed was 26kts across flat water.
I felt the gust hit the main and the boat started to heel. The gentle hum in the rig became slightly louder and higher in pitch as the breeze hit 17kts and boat speed climbed through 30kts. We hit 33kts with the rig whistling and the spray flying, my hands gripping the rubber covered wheel and my body adjusting to the angle of heel as the windward hull rose high above the sea. The skipper was at my shoulder, speaking with his crew. He leaned towards me and calmly suggested I should bear away a few degrees. There was a loud groaning of the traveller easing under the immense load of the 500 sqm mainsail.
The skipper was Yann Guichard and the yacht was Spindrift 2. 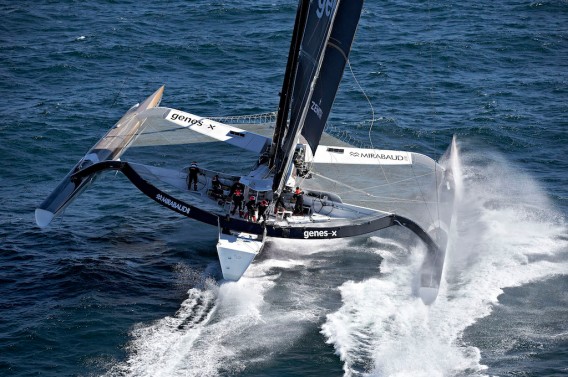 She is the largest, fastest racing trimaran in the world. (Previously Banque Populaire V)
With team Spindrift she is now in an all-out assault on all the major ocean speed records.
They already hold the West-East Atlantic crossing record from New York to Lizard Point in 3 days 15hrs, averaging 33 kts all the way!
Yann and the crew are about to go into a holding period for an attempt at the Jules Verne Trophy for fastest crewed circumnavigation. 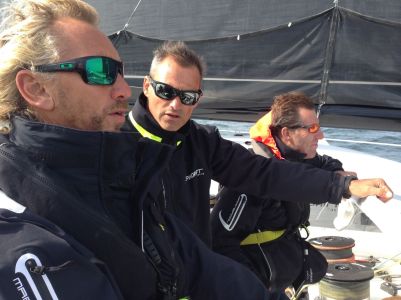 Yann was telling me about his recent trip on Spindrift 2 in the Route du Rhum.
Spindrift 2 usually sails ocean races with a crew of 12-14. The boat is so gigantic and the sheet loads so great, there are miles of spectra lines and huge carbon winch drums. We watched the entire crew grinding at the carbon pedestals for each tack, gybe and sail-change. For the RdR Yann made a few modifications, installed a carbon bicycle behind the main pedestals so that he could grind winches with his leg muscles. He then raced the boat from St Malo to Guadeloupe single-handed! 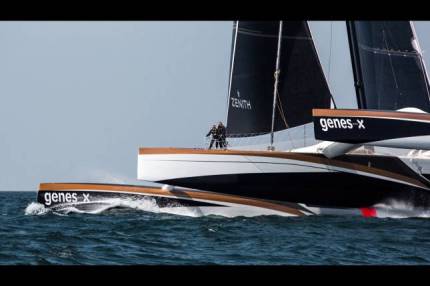 The boat is enormous and the sensation of sailing at that speed is hard to describe. As she accelerates on a reach it feels like riding a 747 down a runway, a huge, unstoppable force. The hulls are so long that the chop is smoothed and she seems to be cutting through the water driven by some unseen power. Her speed is out of all proportion to the true wind. Sitting down on the leeward (downhill) hull, it feels like a very wet and windy ride. She can create a gale of apparent wind behind the main sail as the windward hull rises above you and the central hull starts to lift above the surface. All this in 16kts of true wind speed. You look around and see cruising yachts going past as though they are sailing on a different day, almost stationary in comparison.
There are so many mind blowing statistics for this boat, here’s just a few.
For comparison the numbers are shown alongside another high performance multihull:
Very few ‘civilians’ get to ride on this machine and we considered it a great privilege. We were in Trinité as guests of Zenith Watches and Team Spindrift. They looked after us very well indeed. The gastronomic experience was a far cry from the dehydrated spacefood the crew usually eat.
Four of us from Guernsey were lucky enough to be invited and even more lucky to have a private aircraft to get us there and back.
Many thanks to Dave for putting it all together and making it happen. And also to and Andy for providing the plane. And flying it.
An extraordinary yacht, a very cool plane, an unforgettable trip.
JP 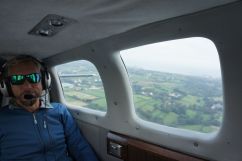 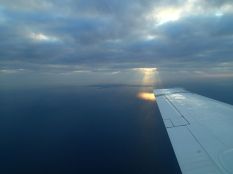