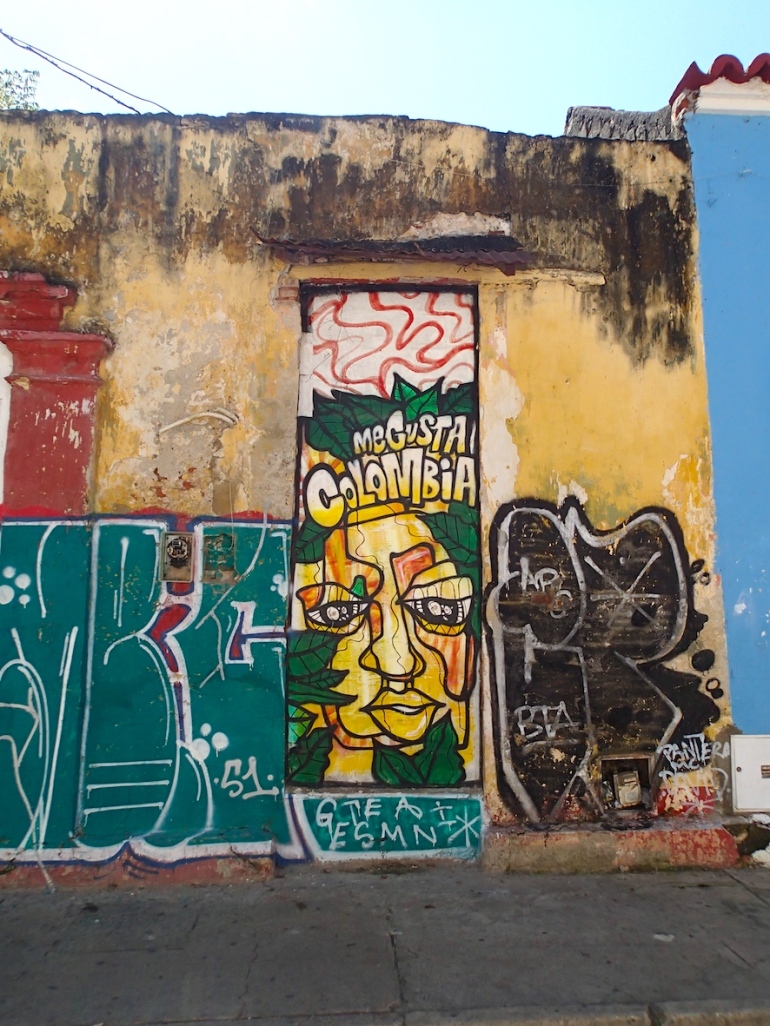 13.12.16
Pablo’s hippos
Eventually we had a signed document from the Port Capitan and were free to leave Santa Marta.  The next passage was a quick 60 mile hop across the bay and in to Puerto Velero. Our route would take us past the mouth of the mighty Magdalena River.  It flows north through Colombia for 1000 miles, passing mountains, rain forests and flood plains before pouring in to the sea here, discolouring a huge area of water.  The pilot books warn of strong currents, floating vegetation, trees and dead animals swept downstream in wet season.  Talking of animals, there are caymans in this river and hippos!   Four African hippopotamuses were illegally imported many years ago to the riverside hacienda of one Pablo Escobar.  They thrived, swam off down the Rio Magdalena and did very well, they are now a successful invasive species.   By the time we had covered the 40 miles from Santa Marta to the river mouth, we were double-reefed and steering down 4 metre breaking waves (did I mention that it is WINDY down this end of the Caribbean?)  The water colour went from blue to green to brown and smelt muddy, we were going a bit too fast to want to hit a log, or a dead cow.  Or a hippo.  Dodging rafts of floating weed and foliage, we rounded the corner and sailed the last stretch in to Puerto Velero, with the sea trying to become blue again.

Silt flowing out from the Rio Magdalena

Aduana? Mañana!
Puerto Velero is a quiet bay but I could see some windsurfing potential on the satellite images.  We had chosen this place to spend a few days while we dealt with customs formalities, well if we’re hanging around for official documents I may as well do a bit of windsurfing.
Clearing customs is part of life as you move between countries in a sailing boat and the experience can vary widely between countries and cultures.
Sometimes I wonder what we’re all trying to achieve here.  The basic premise is that you are a foreign ship entering national waters and each country wants control of it’s borders.  Some enlightened states have modernised and simplified the process so that a sailing yacht can enter and leave with a minimum of time wasted by officials or crew.  They acknowledge that they are really only going ‘through the motions’ in the same way that you would stroll through a green channel at an airport.
The process has evolved from the days of sailing ships arriving with one cargo and perhaps leaving with another.  My favourite clearance document was a beautifully un-modernised piece of maritime bureaucracy from Portsmouth Dominica, worded like something from a Patrick O’Brien novel.
So anyway, the amount of form filling and faffing about can vary, but Colombia really takes the biscuit.  Here each visiting yacht (if staying for more than 3 days) has to be officially temporarily imported in to Colombia, the whole process can take weeks!
So far I have signed several dozen forms, been fingerprinted on two separate occasions, had to visit a ‘Notaria’ in Cartagena to authenticate my fingerprinted identity document, photos of the boat, engines and registration plate have been submitted, and we still have no idea how long the rest of the process will take. Happily we are in no rush, and the delights of Colombia are well worth enduring the ludicrous bureaucracy.

Windsurfing at Gravy Point
Puerto Velero is cartographically interesting in that it doesn’t exist on most charts.  The Bay is now enclosed by a new two mile spit of land which has been created by the silty outflow of Rio Magdalena in the last decade.  If I look on my plotter, the chart shows we are in open sea!  The new finger of land is sandy mud and now encloses a protected anchorage and a little marina.
On the western shore the wind-swell waves break in a mushy mess on the muddy beach.  On the lagoon side there is flat water, a few kiters and steady trade wind breeze.  But right down at the tip, the new land is curling inwards and transforming the sea state.  The big wind swells are refracted round as they approach the sand bar, becoming smooth and glassy now as the wind direction has become cross-off.  The current is loaded with silt and weed, the first time I tried to windsurf round the point there was so much floating vegetation my quad fins were just clogging up, un-sailable.  Today it was windier and I could slalom through the weed rafts.  Perfect brown waves were barrelling down the point.  As you sail in on one it becomes smooth as it feels the bar and then walls up and peels all the way to the deep water off the end of the spit.  Some of the smoothest, brownest waves I have ever ridden! I’m calling it The Gravy Wave.  It was a bit spooky because you can’t see the bottom at all, water is too muddy.  Also I was alone, and a good mile downwind from the boat.  But what a great set up, new land grooming the never ending wind swell into something rideable.  If you’re ok with the brown thing, and the risk of hitting a hippo carcass, you could have quality waves to yourself pretty much every day of the winter, here in the middle of Colombian nowhere.

16.12.16
Cartagena de Indias
It is Dawn’s birthday so we have decided to leave Escapade for a few days and travel overland to the city of Cartagena to celebrate.
Here we are ashore on the old Spanish Main with a quarter of a million pesos in my pocket! (about $100 US)

Our adventure on public transport included an exhilarating ride on the back of a motorbike and a boring ride in a bus, the high point of which was a roadside snack stop for a deep fried something from the ubiquitous food carts.

Cartagena is amazing. An ancient walled city with architecture surviving from Spanish colonial and early republican days. Some of it is well preserved and some crumbling away, or held together with clouds of bougainvillaea. 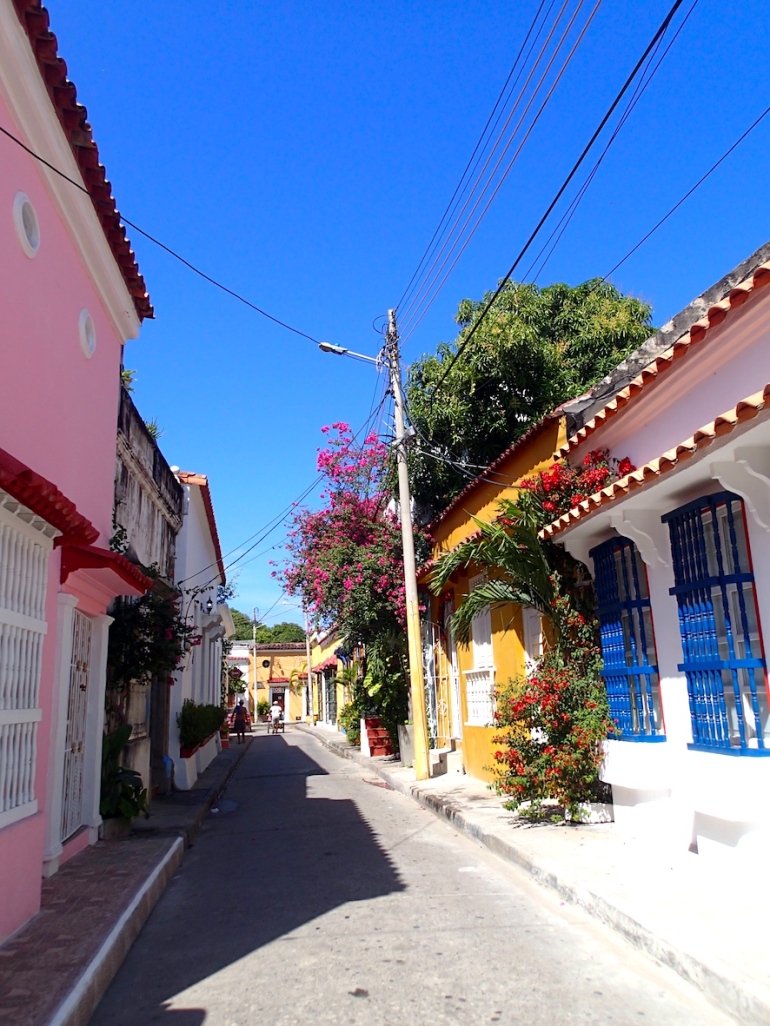 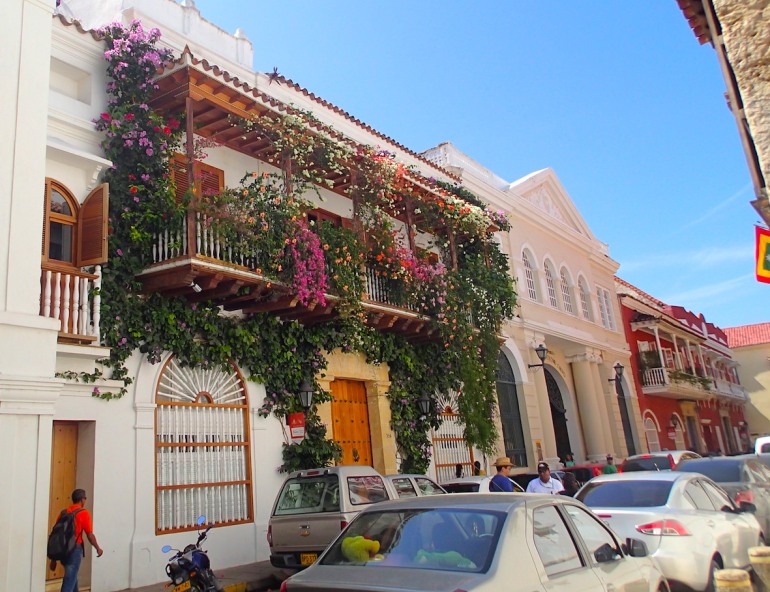 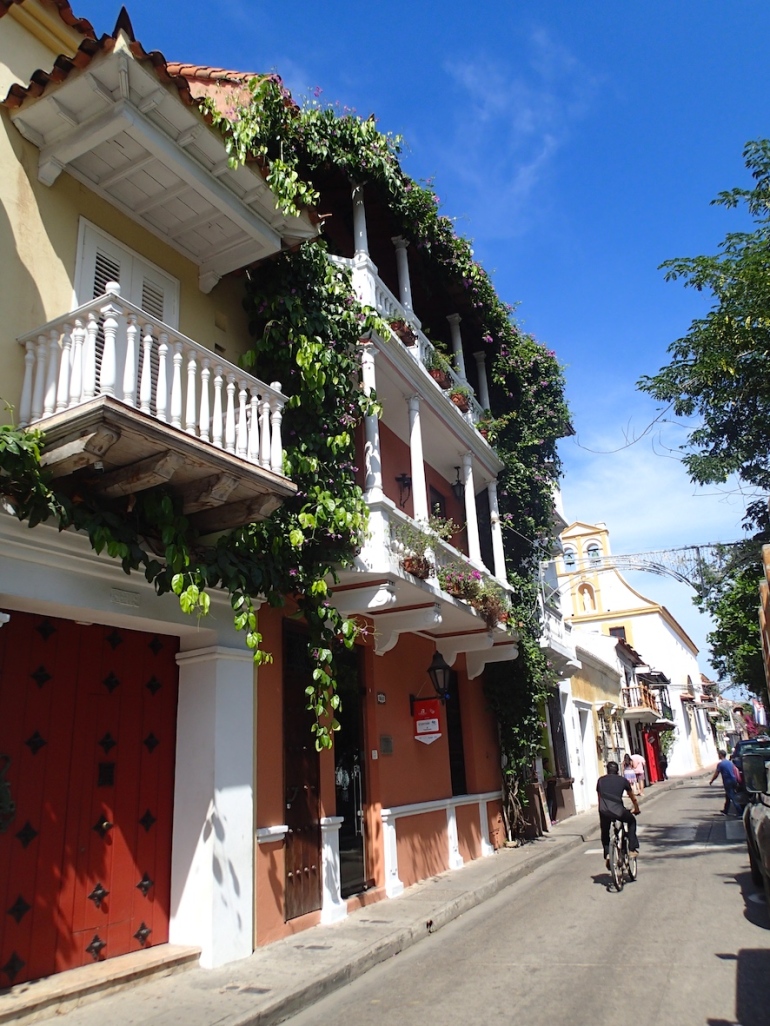 We spent a couple of days exploring, following narrow alleys in to garden squares and bustling plazas.  There is an energy here, the streets throng with Cartagenans, tourists, street vendors, backpackers, great bars and restaurants, an art scene, a young crowd in the hip Getsemani quarter and of course there’s music.  Loud.  Traffic stops for b-boy dance routines in the street, salsa bands with full horn sections play in bars, but also in clothing stores and churches, local kids freestyle rapping on the street, then there’s the ancient Cafe Havana where the band plays and the crowd drinks rum and dances salsa all night as they have for generations.
It was a good birthday party.

The locals are friendly, everywhere I go I am approached by smiling Cartagenan chaps who speak a bit of English and I’m always happy to stop for a chat. Topics vary from the best bar in the neighbourhood to how am I enjoying their city, but within a few minutes I generally find I am being offered an opportunity to acquire the very best drugs in Colombia. 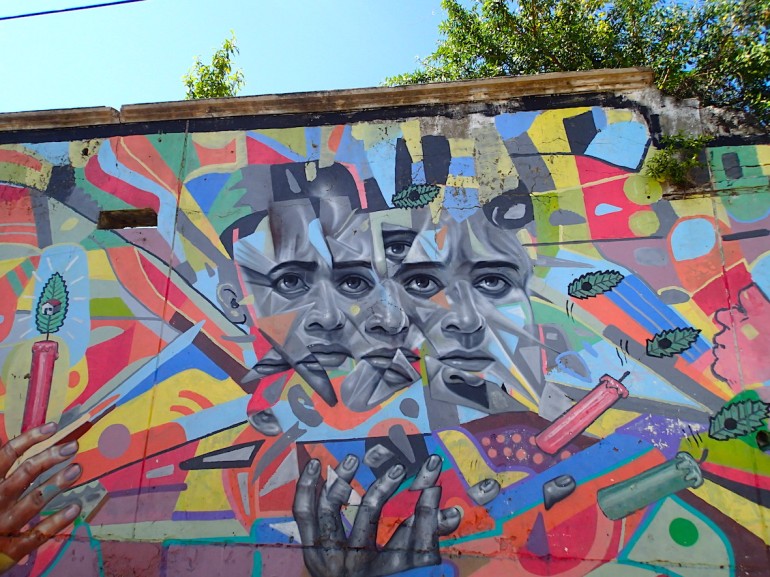 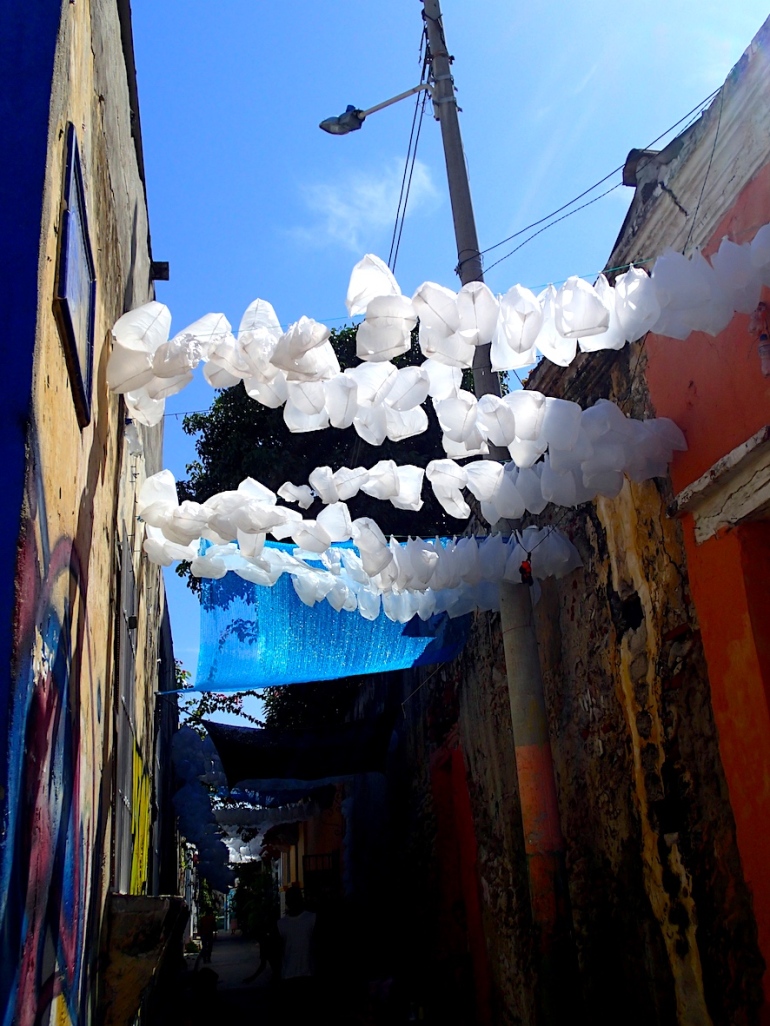 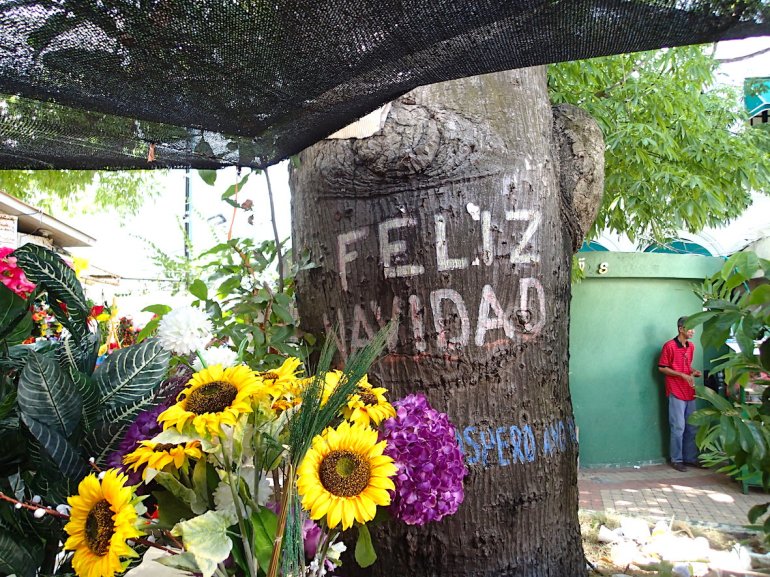