21st February 2017
Chicha Ceremony
I’m staring into the bottom of the upturned calabash bowl again.  This is my third or maybe fourth bowl of chicha.  Each one contains about half a pint of opaque brown liquid, tasting earthy, boozy, slightly sweet and with a hint of burnt coffee.  The three men drinking with me drain their bowls and spit some sludge on to the dirt floor.  We’re getting near the bottom of the barrel.  A young man smiles as he takes the bowl from me to be refilled.  Everyone is smiling now.  We have all drunk a few bowls.  Over on the women’s side of the hut they have started dancing.  Two old guys are playing a rhythmic breathy tune on bamboo pipes.  Soon I am shoved into a dance with four women who push me in to each step and turn, laughing as I try to keep up.  I thank the old chief, the smiling one-eyed ‘Saila’ and the swaying village elders, for allowing us to be here to witness this sacred ritual, then I stagger out into the hot sun.
No, we’re not at the Hayling Island Real Ale Fest, we’re still deep in Guna Yala. 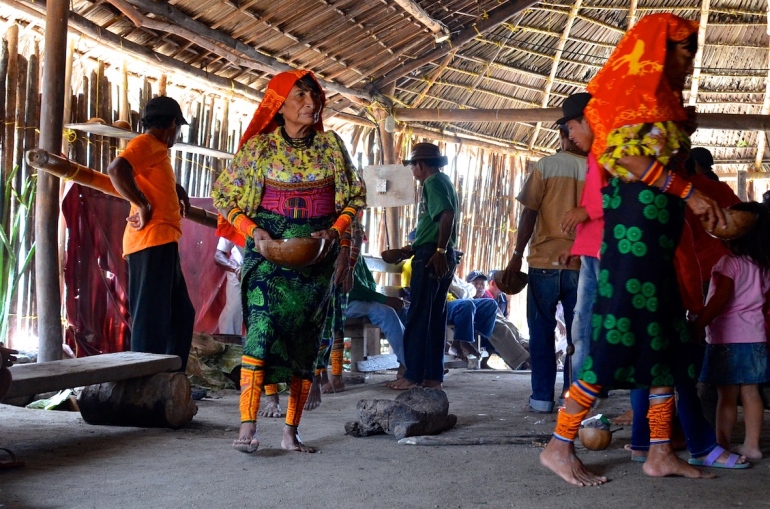 Chicha is hooch, moonshine.  An ancient Guna tradition, it’s use is always ceremonial, never recreational, although this afternoon that line seems to be blurred, in fact everything is a bit blurred.  The purpose of this chicha ceremony is to celebrate the onset of puberty for a 12 year old girl in the village, but the result of this ritual drinking is that the whole village is sloshed.

When the Sailas decide that the girl’s time has arrived, a date is set which will be a holiday for this island village of 250 people.  Dugouts are despatched to the forested mainland shore to collect wild sugar cane.  The cane is crushed in their coconut palm presses (as demonstrated by Dawn in a previous post).  The sugar cane juice is fermented for one week, so it is a sort of low grade rum, or more of a sugar-cane wine.  To this brew is added some ‘special ingredients’ and some ground coffee, to keep the party going. 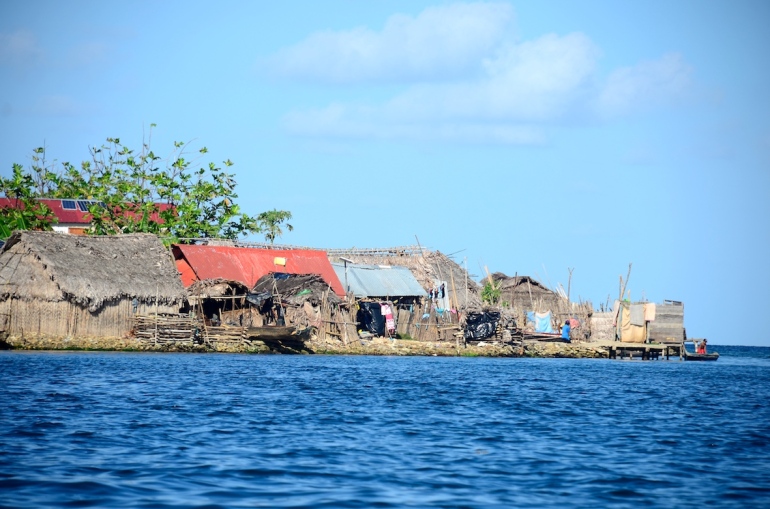 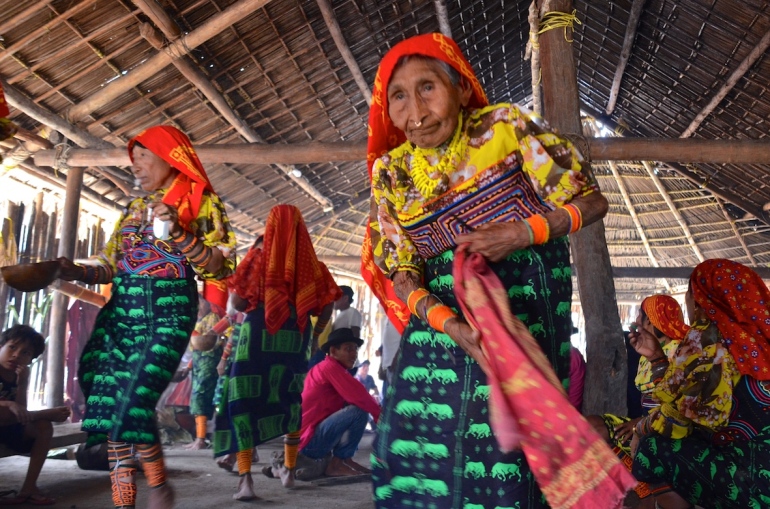 Every Guna village has two large communal huts, built from cane and palm thatch. One is the Congresso, where all of the village business is presided over by the Sailas, the other hut is the Chicha Hut, large enough to host everyone on the island, but empty all year, except for the few days of chicha ceremonies. 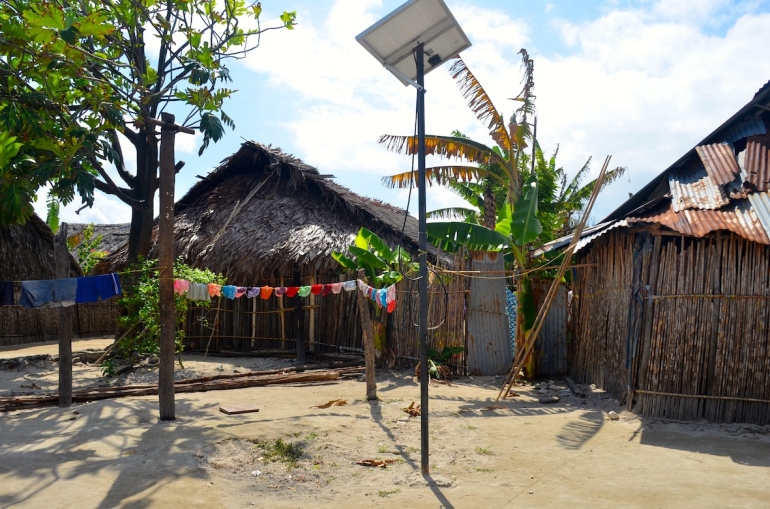 Today was the day for this little girl, we watched as she had all her hair cut off with a pair of scissors, all of it, she’s almost bald. The women with the scissors were laughing and enjoying the day.  From now on the girl will wear molas and beads on her arms and legs. Her hair (when it grows back) will be covered by a scarf, like all the women in the village.  The women look fantastic, many with chunks of gold between their nostrils, some with black lines tattooed down their noses.  Today they have had chicha, they are laughing and swaying, smoking tobacco in stylish clay pipes.
(By the way the costumes you see here are not for the ceremony, this is just what the women wear, every day)

The ceremony began at 1pm with the all the village assembled in the chicha hut, strictly segregated into the male and female areas.  Incense smoke filled the hut, its flames tended by the spiritual leader of the village and his young apprentice. We were seated on low coconut palm benches just off the floor, I’m told this is good, not far to fall.
Village elders performed a dance with some hooting before the first bowls of chicha appeared.  We still had no idea what to expect or whether we would be expected to drink.  It was a great privilege to be invited and made so welcome.
As we mentioned before the Gunas are camera-shy, but Dawn managed to take these photos very discreetly, shooting from the hip with respect for the occasion. 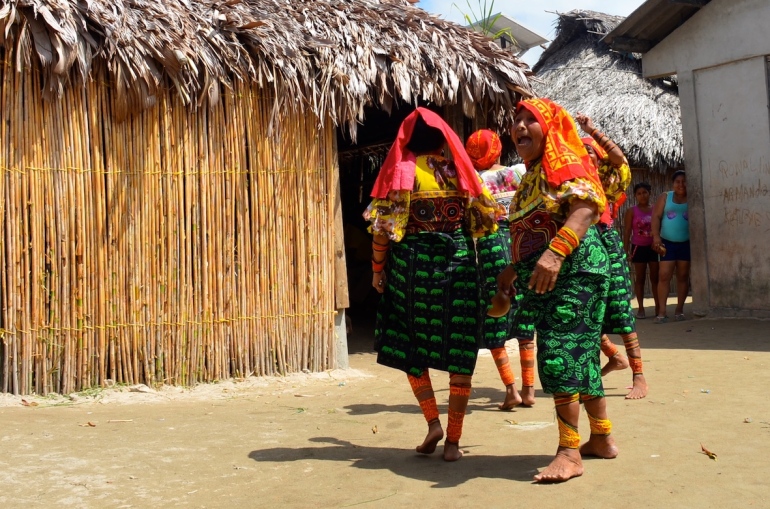 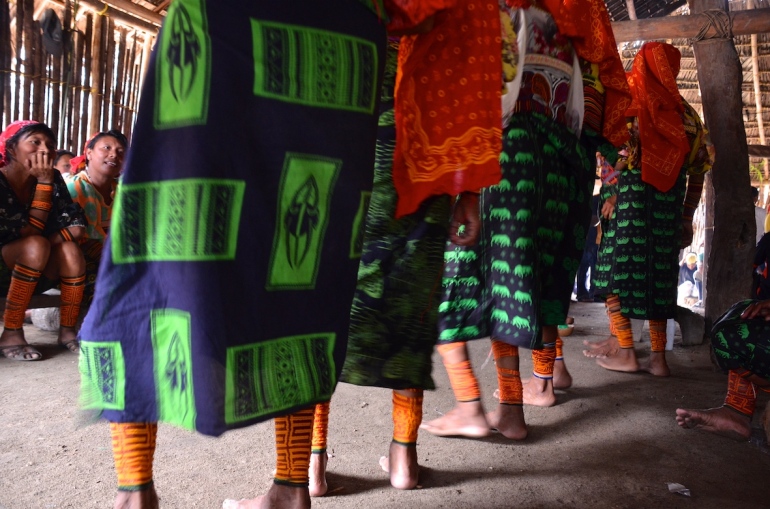 Three hours later we were all chicha’d out.  After my performance on the dance floor we were invited to stay in a spare hammock in the village, but Dawn wisely decided we should return to the boat before nightfall.  After the chicha ran out, the bowls were being filled with shots of Panamanian Seco, another type of low-grade rum, but commercially produced.  At one point two girls circulated with baskets, one full of sugary sweets and the other filled with loose menthol cigarettes which everyone happily started smoking.  We were told that the drinking and smoking all stops at 10pm sharp and the next day village life returns to normal, most of the Gunas don’t drink or smoke at all, outside of the chicha ritual. 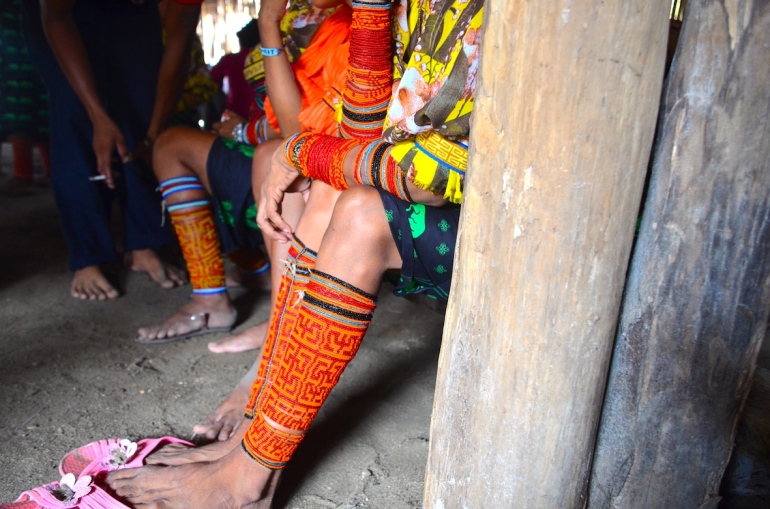 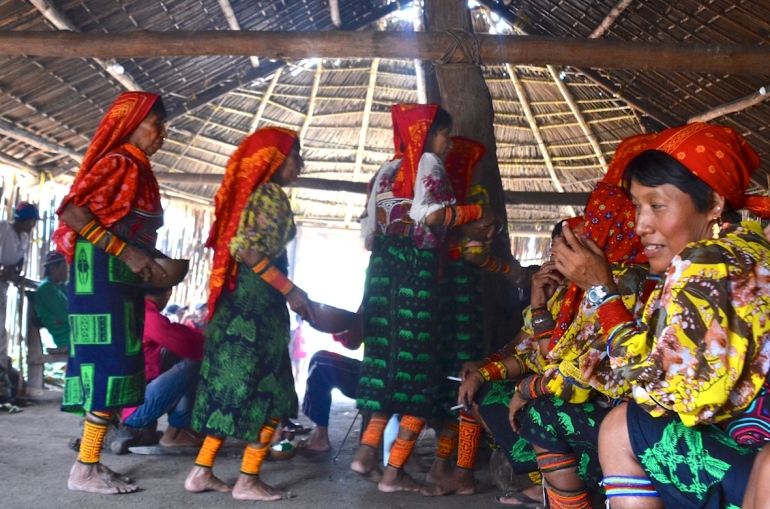 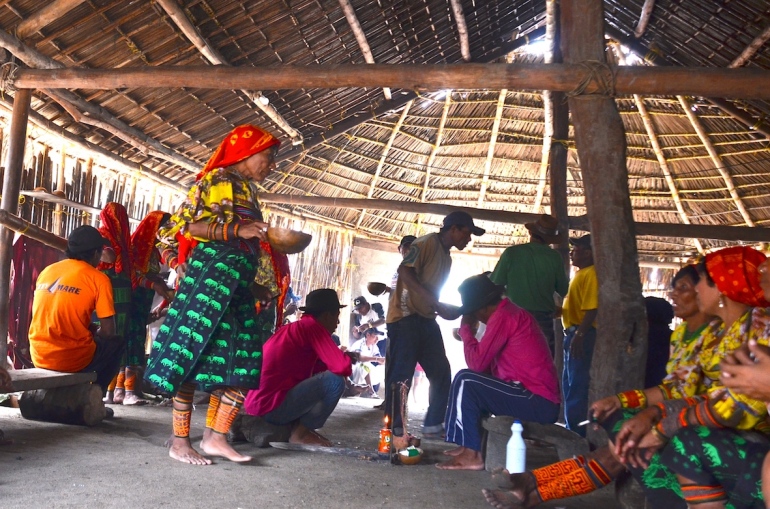 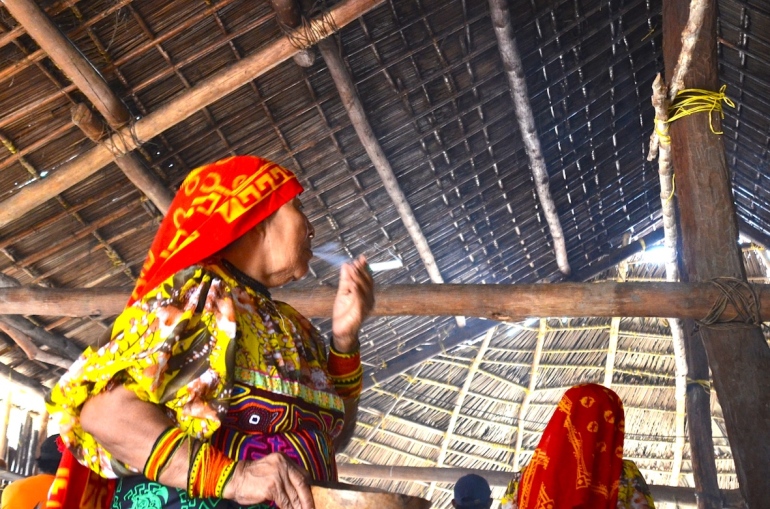 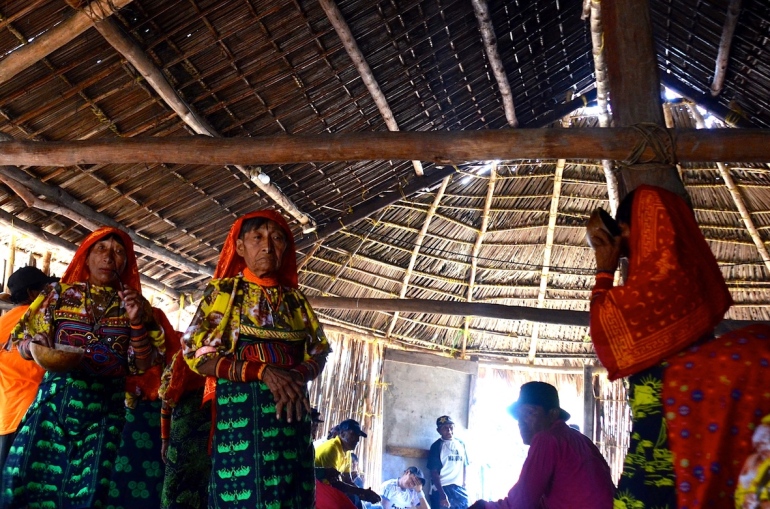 Did that really happen?
The next morning we were on our foredeck at 6am watching day break, heads buzzing from alcohol and caffeine and very thankful we weren’t waking up in that hammock.

Leave a Reply to Mouse