The Original Polynesian name for this island is Te Pito o te Henua, ‘The Navel of the World’.
A sticky-out button in the huge round belly of the Pacific.
Then a passing Dutch navigator caught sight of it on Easter Sunday 1771 and named it Easter Island, while the islanders were still blissfully unaware of Easter.
That name stuck and now the Chilean governors call it ‘Isla de Pascua’, while the islanders prefer the name Rapa Nui.
Lots of names for a volcanic rock about 10 miles across, in the middle of nowhere.  Looks a bit like Alderney from the sea.

I really like that remote outpost feel.  Having recovered from the trauma of our windlass episode, we were ready to explore. There’s only one settlement at Hanga Roa.  The wind blew the right way for us to be able to anchor there, so we took the dinghy in through the town surf break (timing!) and tied up in the tiny keyhole harbour with the local fishing boats.  We cleared in and wandered through a green and pleasant village, a blend of Chilean and Polynesian styles and a bit of a hippie vibe.  We found some fresh local produce for our next voyage, sampled the huge Chilean style ‘empanadas’ and looked forward to returning for more, but next day the wind changed, so we had to move again.

We are keen to be ashore and stretch our legs, but it’s not easy!  The Port Capitan says the boat must be manned at all times, ready to leave at short notice.

The wind was forecast to start NW, soon backing W and rising to 30 kts. We chose Anakena beach, a bit exposed to the NW but should be fine, well sheltered once it goes round to W.
But it never did!  We sat on the hook all night with the boat rocking in the very lumpy onshore chop.  I had snorkelled over to the anchor earlier, it was buried in white sand, so I knew we were ok, but the motion made it impossible to sleep. 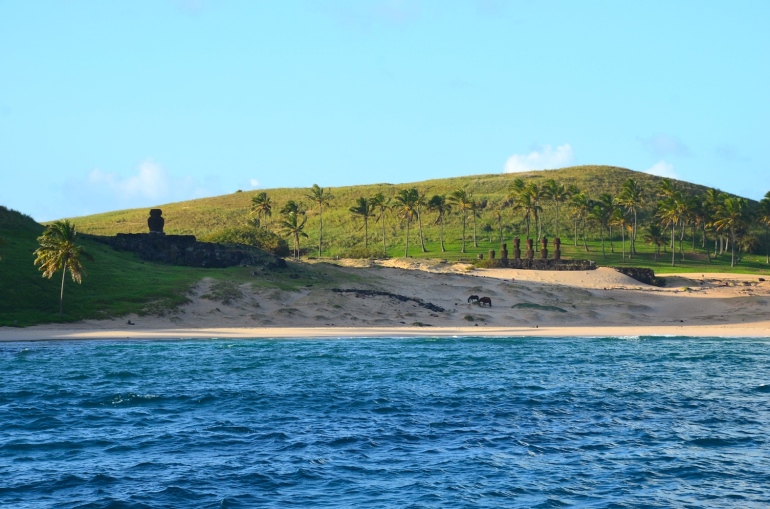 By morning it has blown out, we are sitting off the beautiful Anakena beach, a row of Moai statues and a coconut grove beckon us ashore.  It’s all calm apart from a bit of surf breaking on the beach.  This is our moment!  We launch the dinghy and go in to explore.  There is a sketchy stone dock where I drop Jemima but can’t leave the dinghy.  I tie up to a fisherman’s mooring in the bay and swim ashore.  We hike around the headland, pay our respects to the Moai and find a great lunch in a Polynesian hut on the beach.  We would like to see a bit more, there are horses to rent here, some good hiking and surfing, might stay another week! 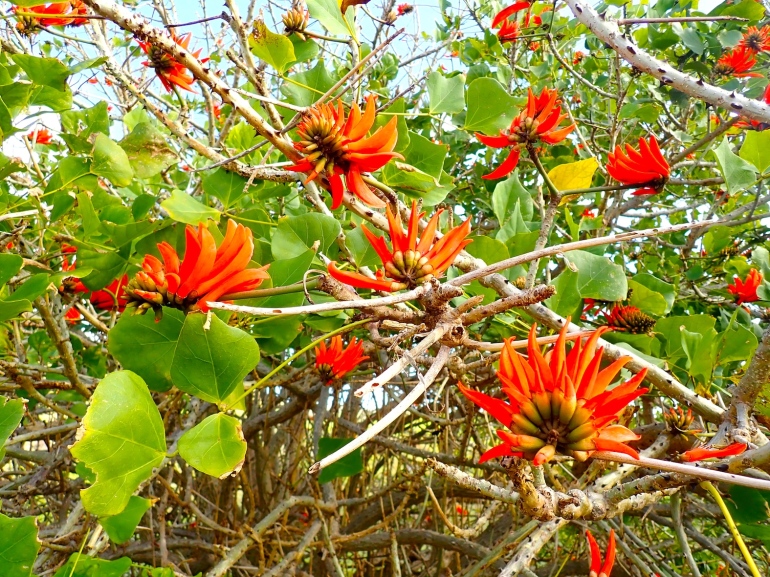 But it wasn’t to be.
The new forecast is for more NW wind and a big S swell.  The worst combination!
We decided we couldn’t manage another of those nights with no shelter from the NW, so we’re off to sea again.
First we have to clear out with the authorities.
The Chilean Armada launch came alongside us off Hanga Roa.  Mauritzio leapt aboard, followed by his drug detecting hound.  A handsome Belgian Shepherd in an Armada uniform with a handle, so he could be passed across between boats. 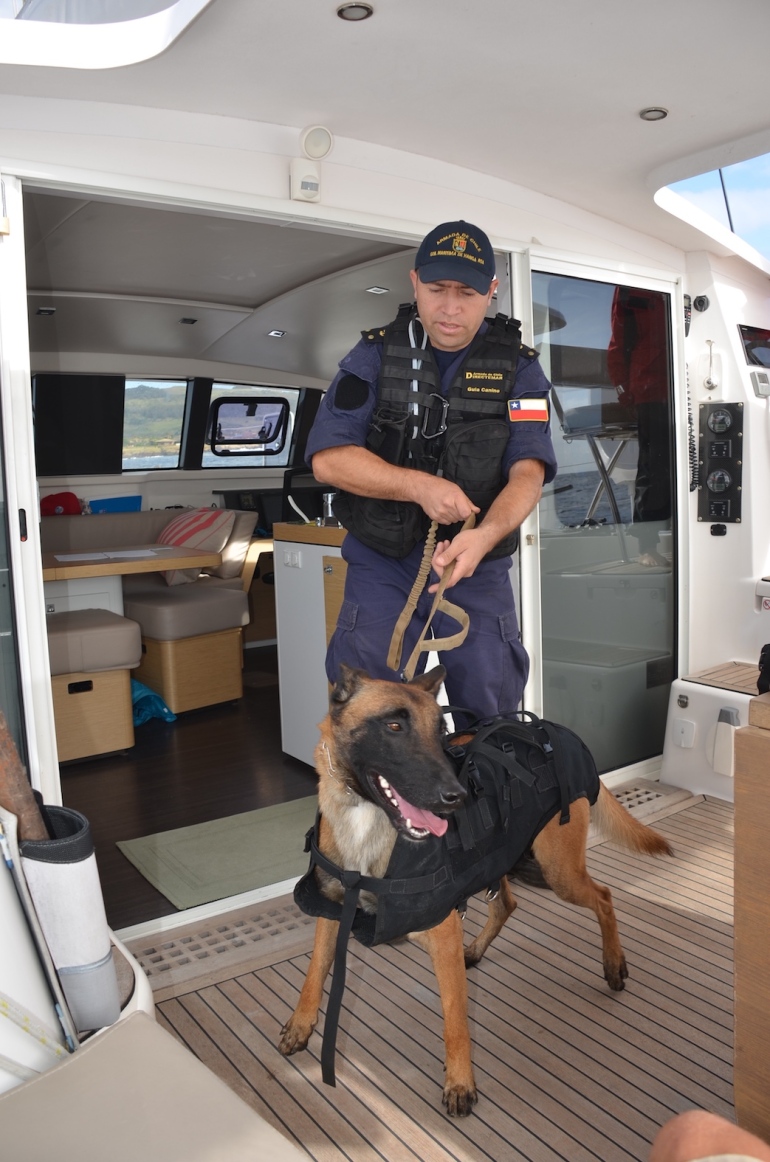 He had a good sniff around, our passports were stamped, and we set off to make the most of the fair wind before the NW set in.  We are aiming for the island of Pitcairn, 1100 miles to the NW!

That northwesterly wind started to blow the next day, up to 25 knots with an uncomfortable sea building.  The following day it was gusting 35 knots.
Escapade can sail to windward, and she can handle plenty of wind.
But to windward, in big breaking seas with a gale from the wrong direction, is not her favourite!
We just had to slow her right down to reduce the strain on boat, rig and crew.  Three reefs, no jib, climbing over endless steep blue hills.  We’re in the northern part of a huge low pressure system that should pass to the east.

Over the next few days we came to realise that the low pressure was not moving!  We were in a massive weather system with no way out.  Ideally I would bear away and run off downwind, given the sea room.  Much more comfortable sailing, but we’d end up at Cape Horn!  We have to get west, the low has to move eventually, so we endure.  We are still managing to cook, eat, laugh and sleep, although sometimes with difficulty.

Every day we get an updated forecast via satphone, nothing but headwinds!  We are working hard to make some ground to the west, tacking on shifts, trying to ease a path across the waves.  The red track on the plotter screen tells a sorry tale of days and nights of frustrating sailing.  I’m still reading about Charles Darwin’s voyage in the Beagle, which he hated.  He has this to say about sailing upwind: “This zigzag manner of proceeding is very grievous”. I hear you Charles. 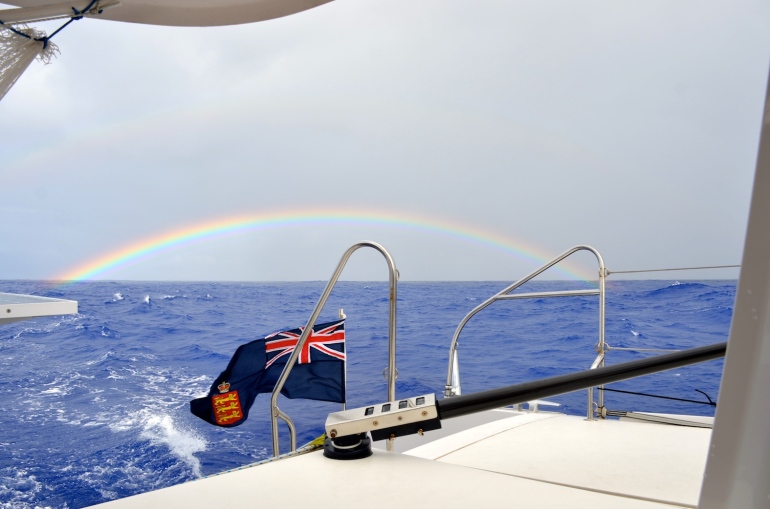 Finally after seven days and nights, the low moves below us, seas subside and we emerge into the centre of the high pressure that was behind the low.  We shake out the reefs, enjoy the sun, and are actually sailing in the right direction at last.
Then we are becalmed.
We swim behind the boat, scrape a thick layer of sea salt from the cockpit cushions and dine outside for the first time this week.
A welcome respite from constant motion. 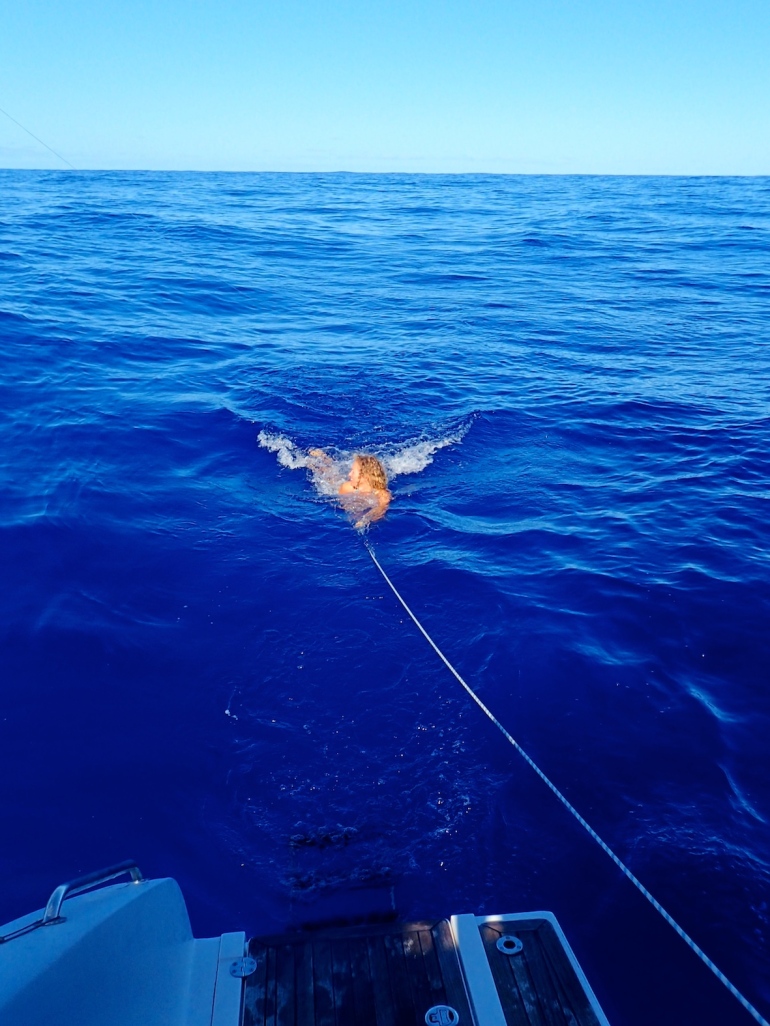 Now we are only 300 miles from Pitcairn Island, but on our route is the tiny speck of Ducie Island, so we call in there for lunch. 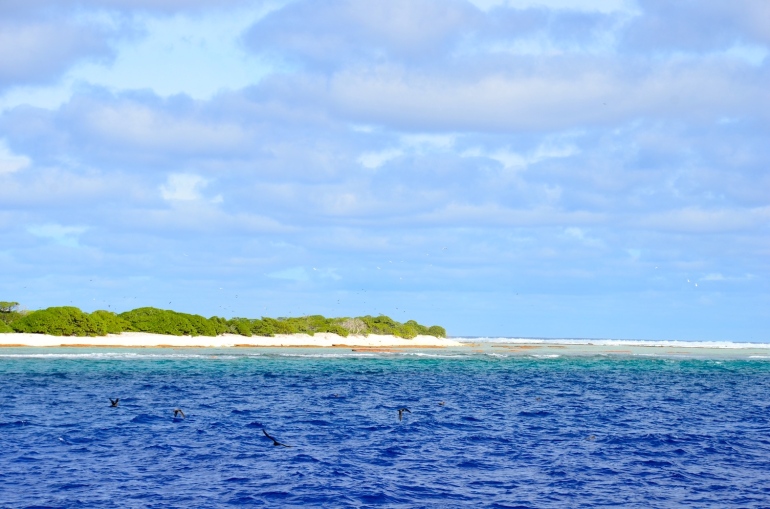 Ducie is really an atoll, a sunken volcano with a beautiful lagoon within. The charts mark a ‘boat pass’ through the reef, but the surf was enormous as we passed, and nowhere to anchor, so we left the fish and birds in peace and sailed on to the west.  Pitcairn is just over that horizon now. 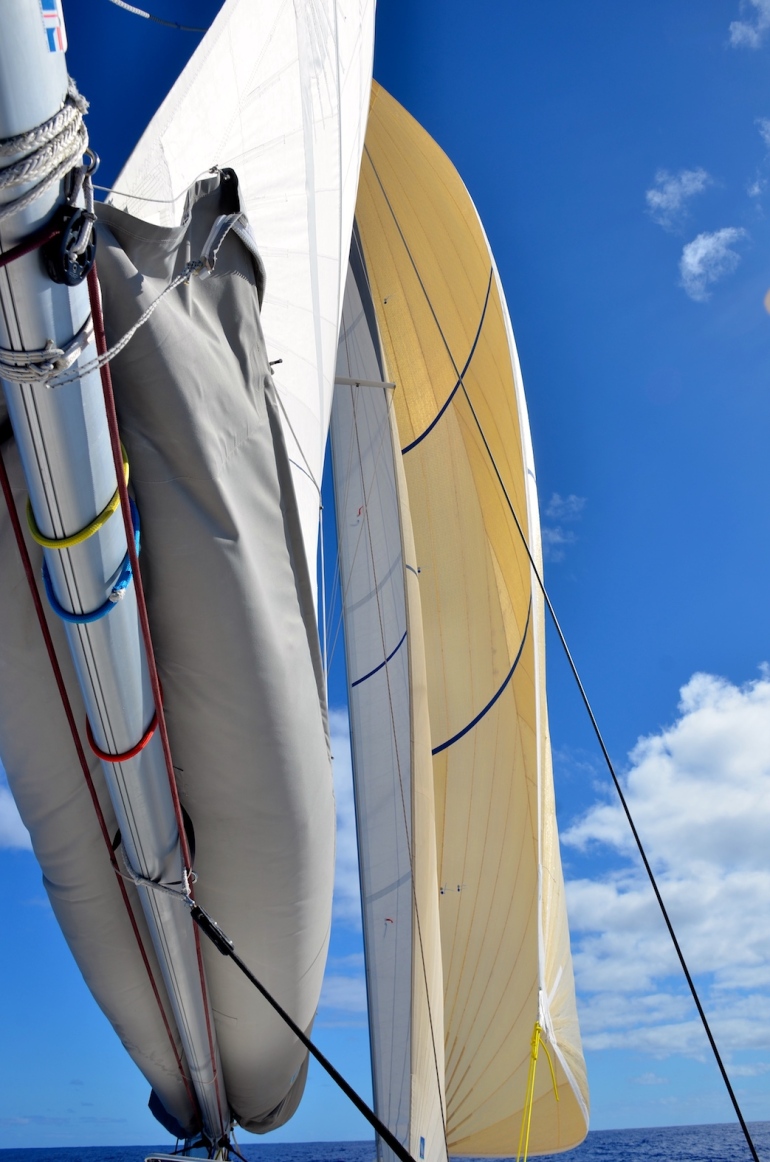