This last leg was to take us a mere 300 miles WNW of Pitcairn, but we were tested by one more gale before we found shelter in the Gambiers.

We had been getting along very nicely, with the occasional 12kt surf, when the wind completely changed gear and started to howl.
Suddenly we were way over-canvassed, should have furled that gennaker while I had the chance.
Jemima was off watch, asleep in her bunk moments ago, now at the helm, soaked again while I prepare to pull down the third reef.  I’m shouting at her through the horizontal rain “Hold on for a moment, it’s just a squall, it won’t last!”  She considers this for a while, “No Dad just get on with it, this isn’t a squall, it’s the new weather.”  She was right, it blew for days.  Anyway we still had a gennaker up, and it was far too windy to furl it – so drop it.  After some (shouted) discussion, I released the halyard at the mast, grappled the huge billowing sail down from above and the two of us wrestled it to the trampoline in the black night using all 8 of our combined limbs. 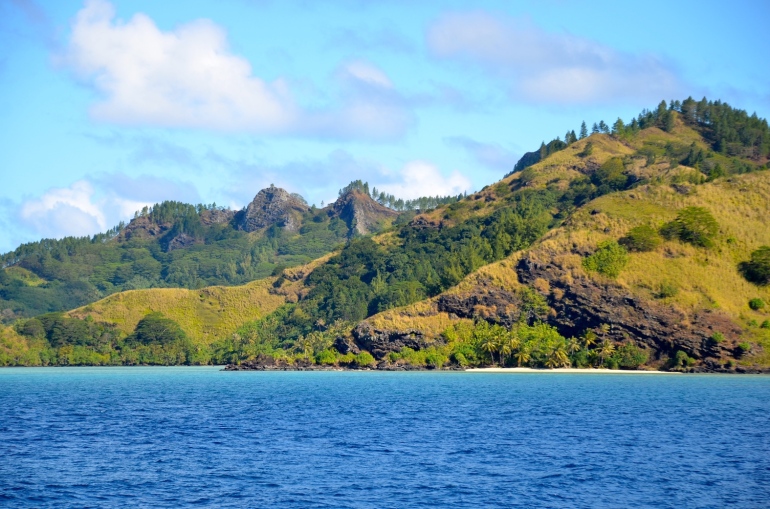 By morning we are in the lee of Les Iles Gambiers.
Here is a cluster of high green peaks, encircled by a barrier reef.
We pass through a gap in the reef to a lagoon about twenty miles across, enclosing the five high islands and numerous islets. 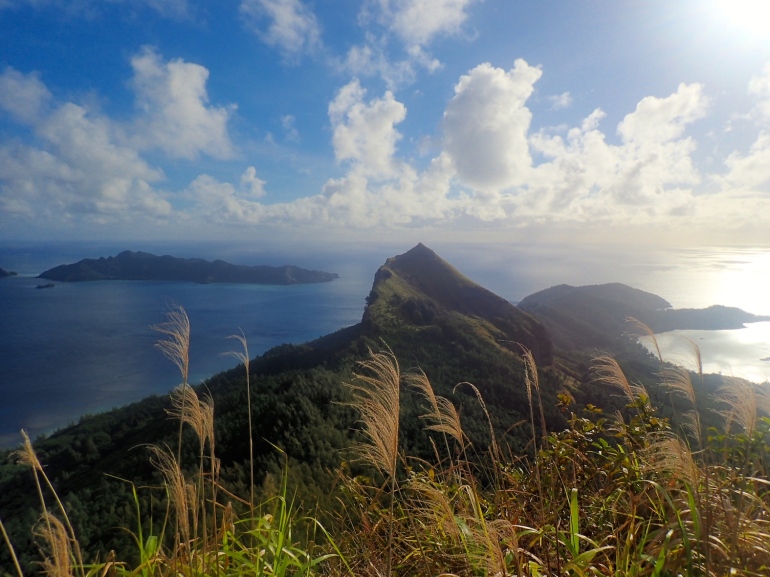 Plenty of bays and coves to anchor in any wind direction.
A sleepy outpost of French Polynesia, still 1000 miles from the bright lights of Tahiti.
Several hundred islanders live here, almost all Polynesian, the main occupation is pearl farming.

We anchor off the village of Rikitea and go ashore to show our passports to the Gendarme.
Ashore it feels like a big garden, extravagant fruits and flowers growing everywhere.  We are right on the Tropic of Capricorn here.  But this is France.  The tiny village boasts a church, 3 petit magasins where you can stock up on President butter, roquefort cheese and some frozen escargots, then down the lane is the boulangerie which sells fresh baguettes twice a day.  There’s a dusty petanque court in the square under the mango tree.

But enough walking around, we’ve been up half the night, is there a bar here?  Or a restaurant?  We’ve sailed thousands of miles to get here, any chance of a shady seat and cool bière?  Not so far.
Finally at the other end of the village we find our way to ‘Snack JoJo’.  The only hostelry on the island, not only do they offer shady seats and cool bières, they will serve you steak frites or gaufres avec Nutella. Oh go on then. 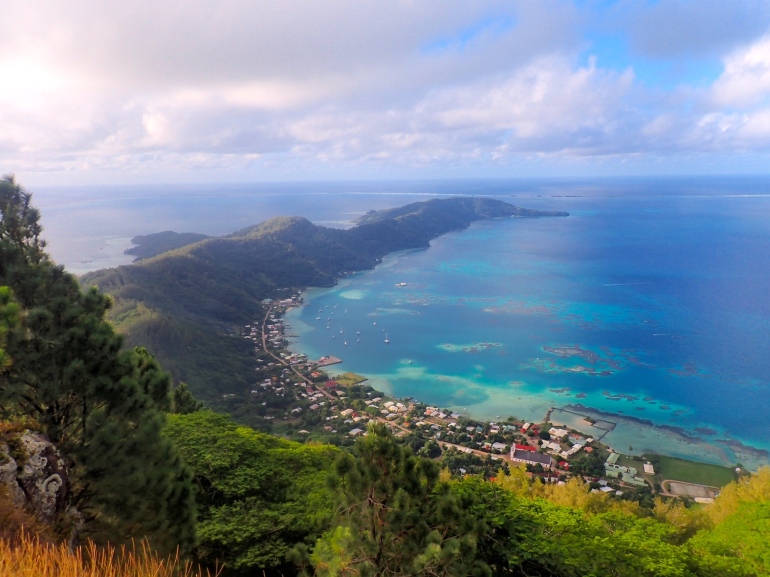 Behind the village there is a mountain, we climb up through the jungly foothills, banana groves, papayas, mango and avocado trees, pomegranates, pamplemousse, coconuts, up to the cooler air, through the casuarinas, into the pine forest, now we are eating the wild raspberries, and finally out onto the grassy summit with a booby’s eye view of the whole island and the anchorage 500m below.  Escapade sitting in a blue pool between reefs and turquoise shallows.  Back down in the village homemade goodies are being offered on the sides of the road, choux buns, beignets, meats on the grill behind the long Sunday afternoon petanque game. 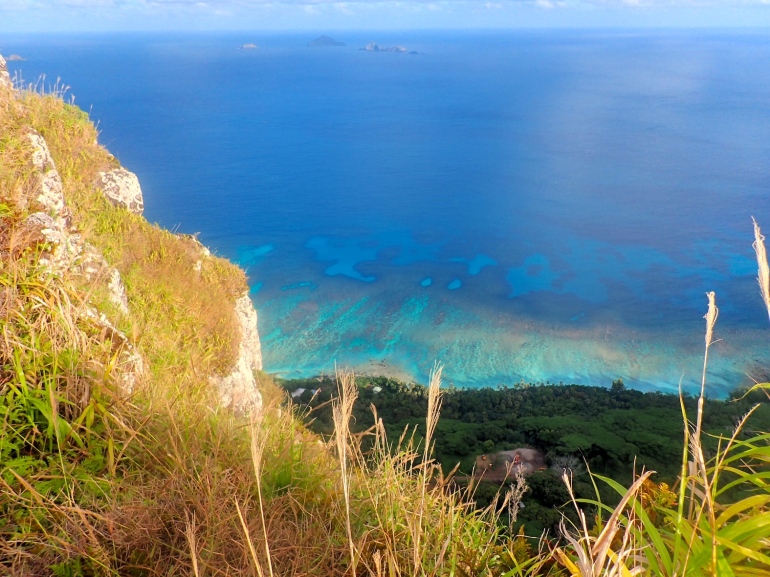 The French military built an airstrip on the barrier reef here, in the days when there were nuclear tests on the atolls to the north.  Now that airstrip gets a weekly plane from Papeete, and next week Dawn will be on it!  Time for her return to Escapade life after 5 weeks away. 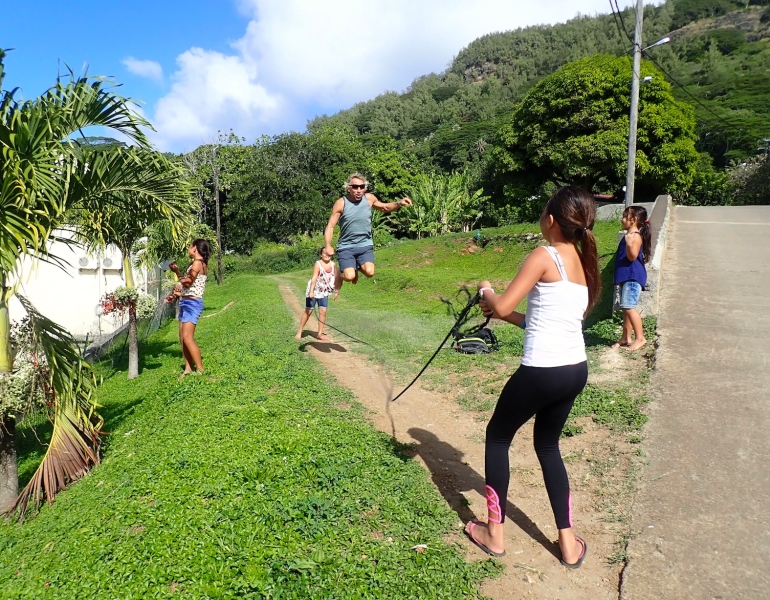 11th June
Out to the islands

After a few days anchored off the village of Rikitea, Jemima and I have climbed the mountain, cycled right round the island, joined the girls skipping team, caught up on sleep and the wind has dropped. We still have a few days before Dawn arrives, so we set off to see the smaller Iles Gambier, starting with Taravai, which is very slightly inhabited.  We find a way through the coral maze and drop the hook in a blue lagoon. There are a few little houses along the beach, smoke rising.

We glide ashore on the paddle board and meet the locals. Hervé and Valerie live a life here that is sublimely simple.  A modest timber house, some very fertile land cleared from the jungle.
Their garden is beautifully kept, neat rows of vegetables growing, pigs, chickens and goats, a nice solar array provides electricity, huge containers hold rainwater from the roof.  Hervé shoots fish on the reef, their youngest son runs wild with his dog.  And the jungle all around provides fruit, falling from the trees.  Year-round supplies of pamplemousse, bananas, coconuts, papayas, limes and oranges, plus seasonal guavas and pomegranates, then avocados, mangoes and lychees to look forward to in summer.  We pick arabica coffee beans growing wild in the woods.

We roam through the vegetation, past the abandoned church and the other beachfront smallholders Jean and Marcel, each living a similarly simple life.
Taravai, total population about 7 humans.

Our next stop was the island of Aukena, where we were invited to join a party of French sailors creating a feast with islanders Bernard and Marie-Noelle, which would coincide with the day of Dawn’s arrival.
First was a quick jaunt in the bushes to find a young pig, foraging wild along the beach.  He would form the centrepiece of the Polynesian banquet that was being prepared.  We de-husked and split coconuts, drank the water, grated the meat then squeezed out the ‘lait de coco’. This was used to make a ‘poisson cru’ with fresh tuna.

We picked limes for a ceviche of ‘Huitres de Perles’.  Bernard sacrificed a young coconut tree to provide us with a delicious heart of palm salad.
We learnt how to roast ‘uru’ (breadfruit) in the embers of the coconut husk fire. The unfortunate cochon was dispatched and expertly butchered on the beach. The meat would cook slowly for hours over the fire, the blood was prepared as ‘Boudin’, the head as ‘Paté de Tête’ and the liver and kidneys as ‘Paté de Fois’.  Very little wasted, the cats and dogs were well fed. As was the football-playing rooster.
Best of all Dawn’s flight arrived on time.  We blasted across the lagoon to pick her up in Bernard’s home-made boat and she joined the party in time for the feast.
A long lunch at the sandy table under the coconut trees, dappled sun, smoky fire, cartons of vin rouge, fluent Franglais all-round. 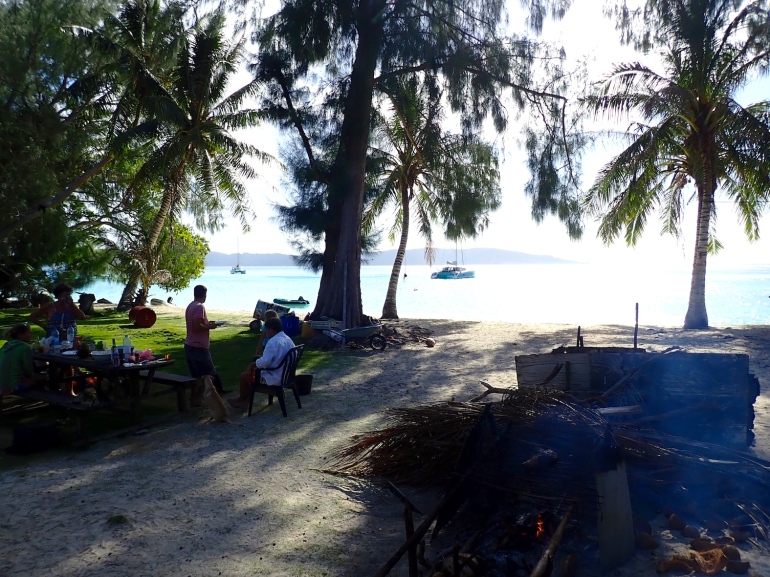 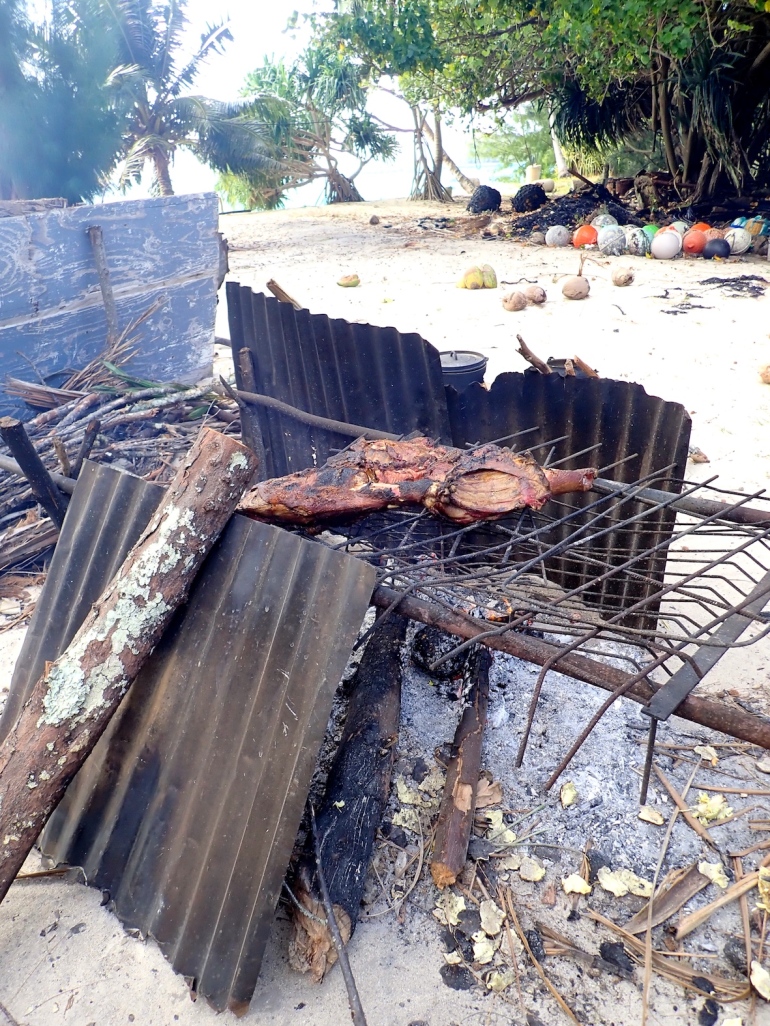 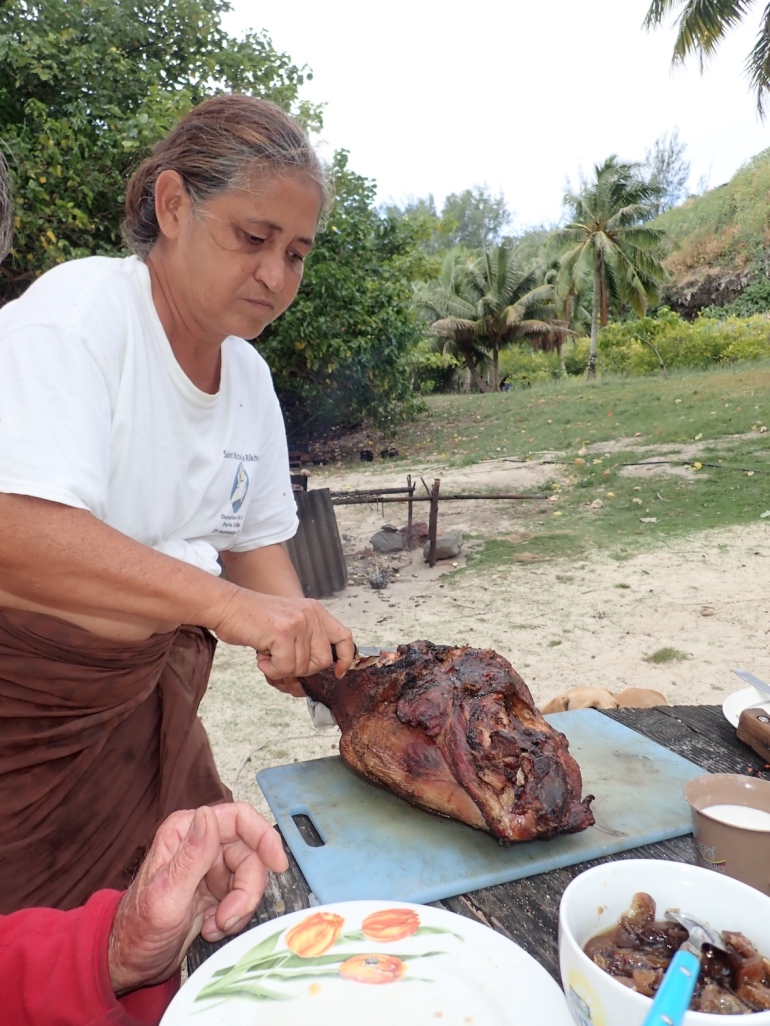 That night the winter returned. Cold SE wind and rain. We decide to sail north in to warmer weather.  My jury-rigged windlass is shifting out of alignment and it’s time for a professional repair. Looks like we should sail straight to Tahiti. 888 miles.

Downwind sailing at last!  Easy 200+ mile days.  Blue skies, moonlit nights, fresh fish suppers.
We are back to a crew of 3, so the night-watches are shorter, everyone gets plenty of sleep , all nice and easy as Escapade eats up the miles.
Our course skirts the southern western Tuamotus, a huge archipelago of atols.  These are low motus and reefs, hard to see from even a few miles off, and a worry to be sailing close to at night.  There is a long history of shipwrecks in these waters.  It looks like we will pass within a few miles of one.  I zoom in on the chartplotter, there is no detail and I’m suspicious of the charting.  We have seen significant off-set in other remote places, is this atol where the chart says it is?  My pilot book says palm trees make a great radar target.  I turn on the scanner and there it is, a bright orange blip 5 miles away, a stand of coconut trees on the atol, exactly where it should be.
Very reassuring, imagine sailing these waters with just a sextant and dead reckoning…

The fourth day saw dark squall clouds, but not much wind. I left the afternoon Scrabble game to walk around the boat and see if the wind was returning.
As I scan the horizon, there right next to us is a very big whale, swimming alongside and looking us over.
It is so unexpected and exciting.
Our resident marine mammal expert identified our visitor as a Sei whale, second in size only to a Blue whale. 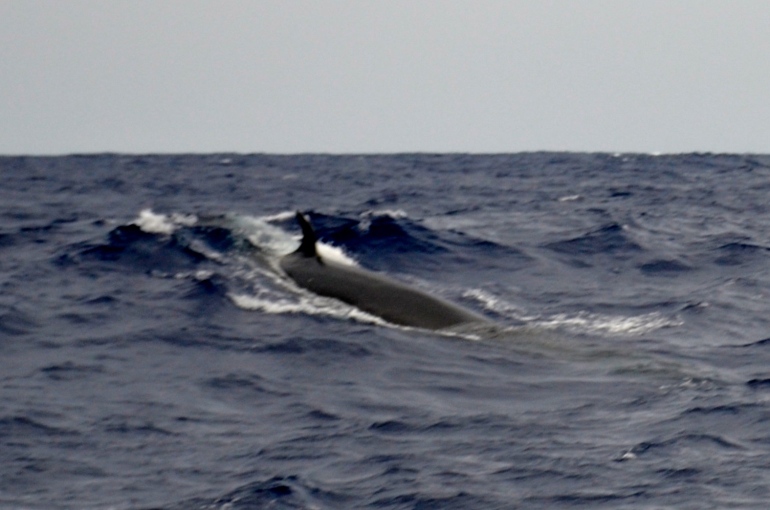 The next night we are counting down the miles, looks like a perfectly timed landfall at first light. Dawn will be on watch.

I wake at 7am to an overwhelming view of the island of Tahiti.  Not a distant peak on the horizon but a huge 3D tropical mountain range right in front of me.
Dawn is drinking tea at the helm, still in her warm night-watch outfit.

We are sailing close in, smells of land, wet earth, woodsmoke.
Along the coast we pass Teahupo’o.  Clouds of salt spray hanging over the reef.

We sail up the west coast, enter the lagoon and steer through the busy anchorage off of Marina Taina to a quiet patch of pale green water over white sand.
Now we are swinging on the hook in a turquoise pool with a ridiculously scenic view.  Glassy surf is peeling over reef, beyond that is deep blue, then the green peaks of the island of Moorea.

On our starboard side are a row of palm thatched bungalows on stilts over the water, honeymoon suites at the Intercontinental Tahiti, each boasting a postcard view of the lagoon and Moorea, except that now there’s a big grey catamaran in the foreground.

A few days relaxing, time for laundry, the next to-do list, and the return to this civilisation, the one with internet, and good pizza.