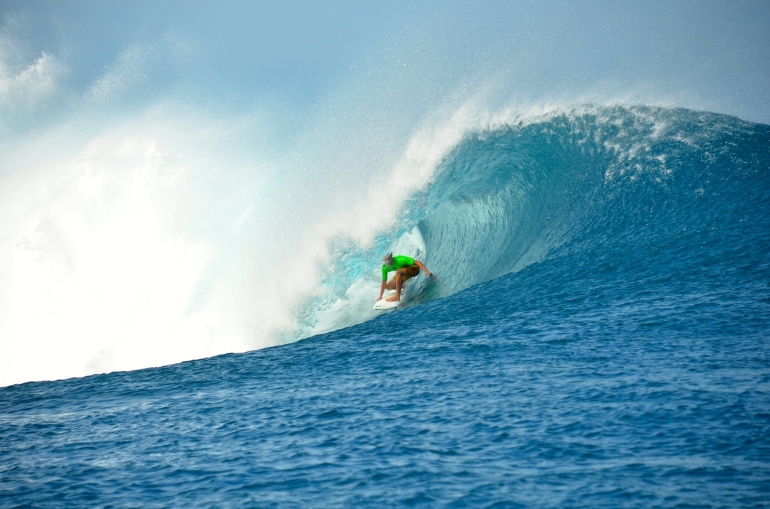 It’s funny how the clichéd images of Polynesia are actually still quite real.

If I told you about the beautiful women with flowers behind their ears, musclebound men strumming ukuleles under coconut trees, an outrigger canoe outside every house and everyone has traditional tattoos, it would sound like a cartoon, but it’s sort of true.

Our little tour of the Society Islands took us from to Tahiti to Moorea, Huahine, Raiatea and Taha’a, where the sun sets over Bora Bora. 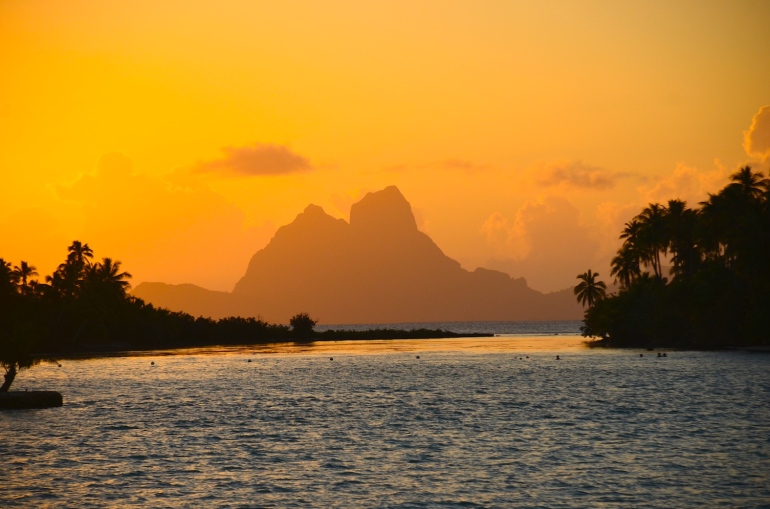 The islands and their lagoons are all beautiful.

Yes Pape’ete is a growing cosmopolitan city and there are hotels and resorts around the islands.

But away from all that, most of the land is steep jungle.  The flat coastal areas are rural and sparsely inhabited.  It looks like a very relaxed and authentic Polynesian life, complete with ukuleles.

In one out-of-the-way anchorage we were joined by a boy in his outrigger canoe offering us coconuts and fresh sea urchins, the barter system included the food, some francs, a t-shirt and a go on my windsurf board in exchange for a paddle in his pirogue. 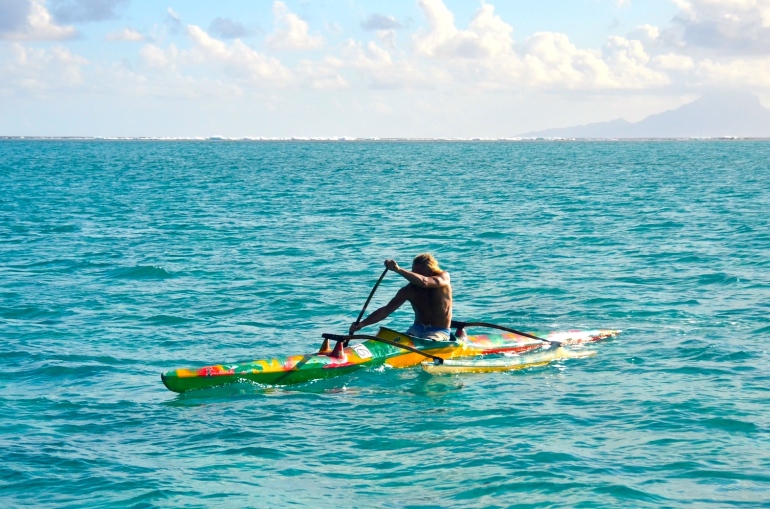 After we have been anchored somewhere for a few days, the boat becomes part of that environment.

We often get ‘adopted’ by fish who enjoy the shade under the hulls, or the way the anchor chain moves the sand.

We have had gangs of little squid who take a liking to the water between our hulls and stay for days, there are usually scavengers competing for fish scraps going over the back and sometimes remoras who seem to want to stay attached.

Here, it is the puffer fish.  A pair of chubby, bustling puffers who seem to be feeding on whatever the chain rakes from the sand as the boat swings to the light breeze above.  Every time I look over the side, there they are, busy with the chain or resting in the shade.  They are used to my morning swims through their territory and look me in the eye as I pass.

Further out on the flats I pass eagle rays, flapping their wings as they fly through the water, a reef shark, stingrays, the occasional turtle, nothing unusual here, we all see each other every day.  Each swimmer acknowledges the others and we adjust our course if necessary to keep a polite distance.

Drying off on deck I watch a flounder crossing the sand below, he thinks I can’t see him if he stays perfectly still.  It’s so glassy I can see his gills moving.  Eagle rays leap out of the water, but never when you have a camera in your hand.

After a few days with these neighbours, this morning we are moving on.  The anchor comes up through the clear water and Escapade moves into the deep channel.  Mr and Mrs Puffer fish appear to be outraged.  Their shady shelter, now just a bare patch of turquoise shallows.  By tonight I’m sure they will have found another yacht, and we will have found another pair of puffer fish. 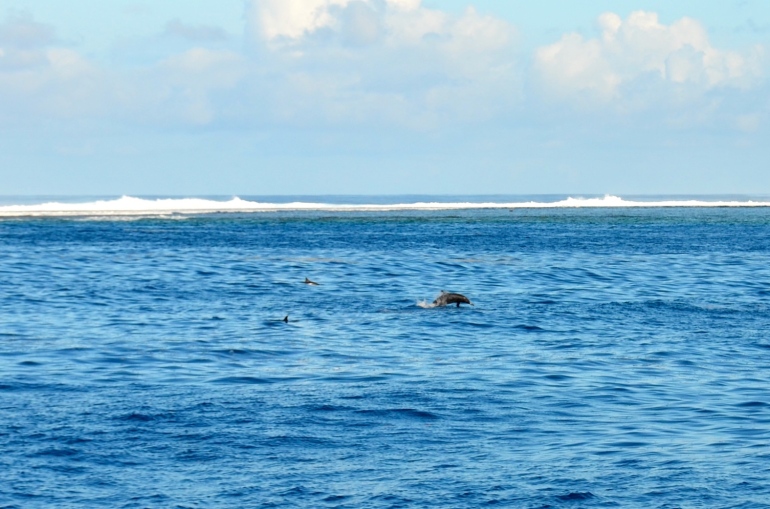 As we approach the pass, the resident pod of dolphins are playing, they swim with us to the edge of the lagoon.

Then outside in the open ocean a humpback whale breaches just ahead of us.  More whales blow around us as we ghost along in the lee of the island. That’s a lot of sea life this morning, and it’s still only 9am.

Back in Tahiti with Jemima, we explored the sad remains of an old trimaran sunk on its mooring, and a small plane sitting in clear water off the end of the runway, both now full of fish. 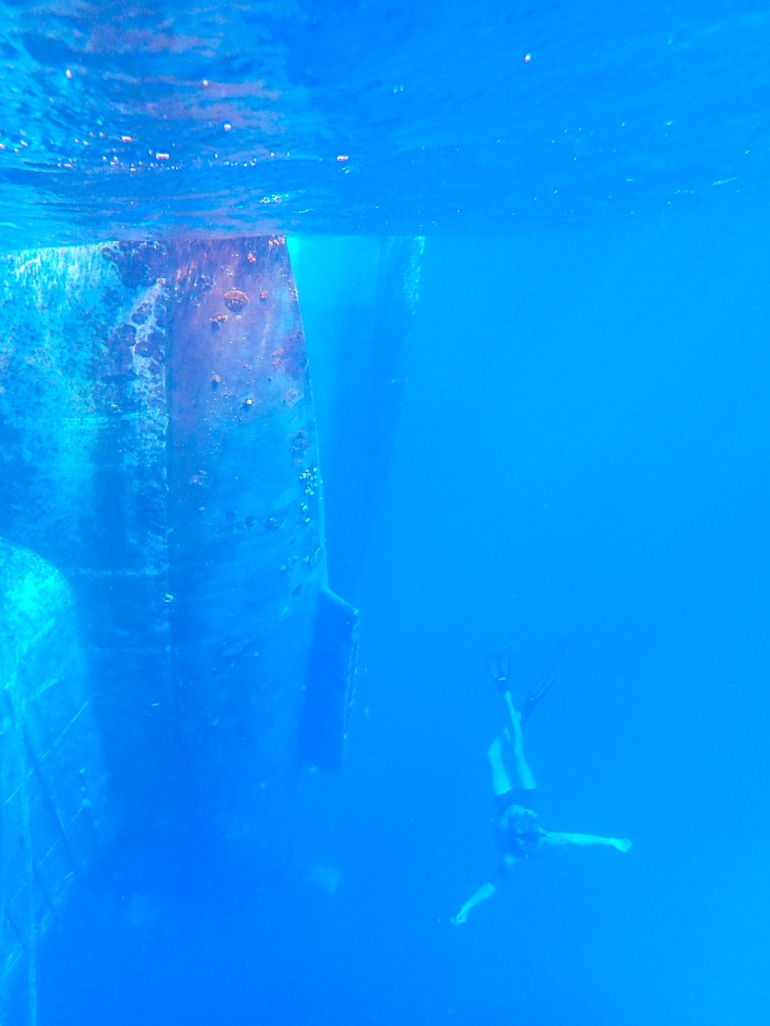 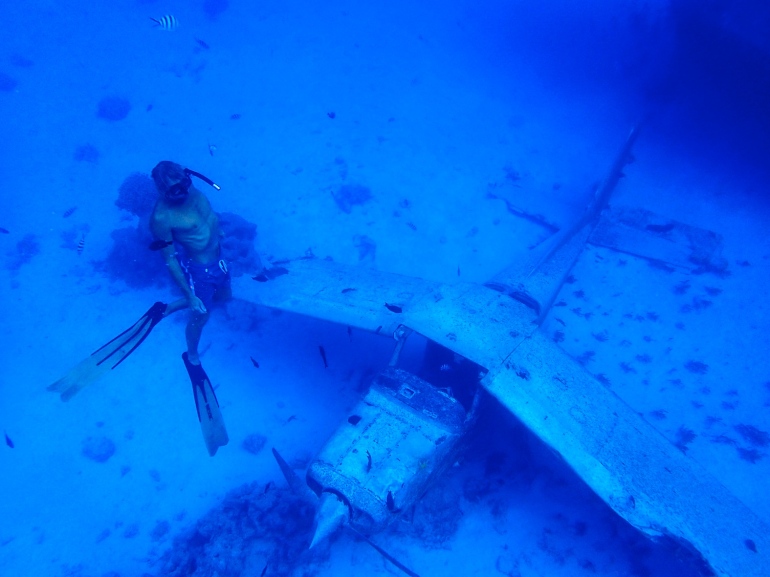 We were watching the swell forecast for a chance to see the famous wave at Teahupo’o from the water.

When the day arrived, the WSL were running the qualifying heats for the Tahiti Pro surf contest.

The swell had come up from nothing overnight, to 2.4m at 15 seconds, which is enough to produce some very solid sets at Teahupo’o.

Forty surfers competing for one place in the actual competition starting 10th August.  Mostly local heroes and a few visiting regulars, hoping for a chance to compete with the world’s best.

Dawn had somehow foreseen all of this and made reservations for a car, accomodation and a taxi boat to the wave.  We drove down the day before and were on the dock at 9am as the morning showers passed and the sun came out to light up the show.

Our skipper Michael arrives and we head out to the pass to join the party.

He puts us right on the shoulder of the wave, with about twenty other boats, as many jet skis, cameramen, competitors, marshals, the local  gendarme on his jetski, several men, women and children casually sitting in the water on surfboards and paddleboards, all of this just a few feet from the breaking wave.  Live commentary from the judges’ tower drifts over the floating circus, letting us and the riders know their scores for each wave. 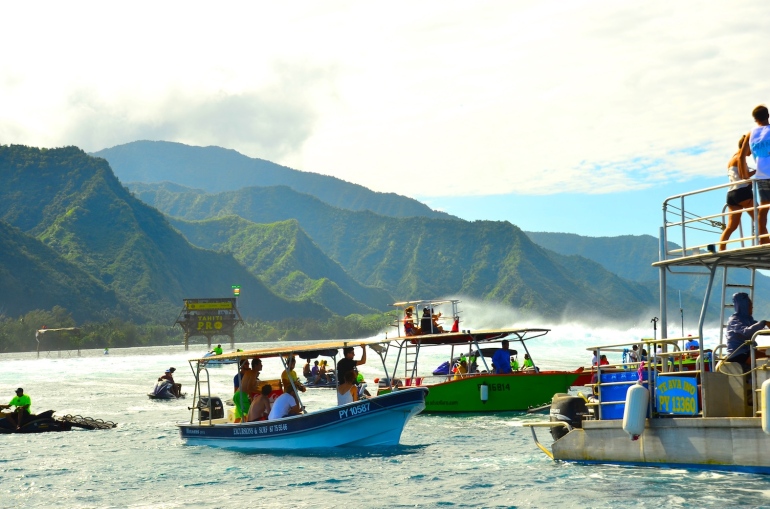 When the first big set arrives it is just breathtaking.  Abnormal lumps on the horizon quickly become dark lines in the water beyond where the surfers are sitting, then the first wave stands up, distorting our foreground and blocking the view of everything behind it, forming a shining dark wall which seems to hollow out the sea in front of it as a brave local lad makes the drop, fifteen feet down then pumping for height on the wall as the lip pitches above him. 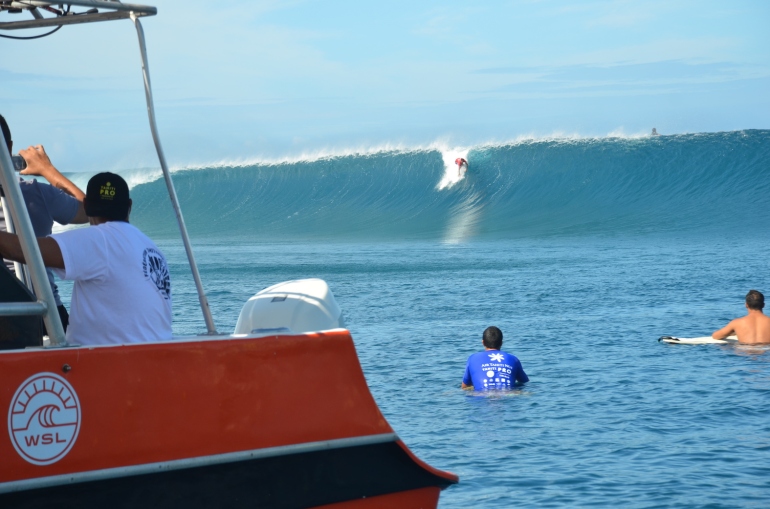 If he gets it right, his ride will be a long, deep, stand-up barrel which will spit him out a boat length from us.  If not, he will be pounded by that famous lip into the shallow water over the reef, and almost certainly have to swim under the next one or more, unless he’s lucky enough to be scooped up by the rescue ski.  From the heats I watched, I’d say the odds of a completed ride were no better than 50/50.  Compelling viewing!

Surfing here is not about tricks, carving turns or aerials, it’s about making the drop and making the barrel or dealing with the consequences, and it gets much bigger.  All pretty terrifying. 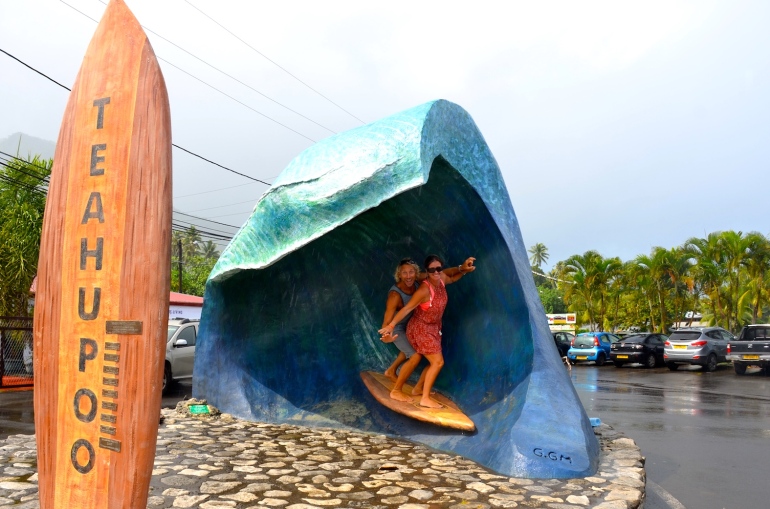 So having cheated death on the shoulder of Teahupo’o, Dawn and I jumped off the mountain.

Jemima’s friend and ace pilot Jørgen invited us to fly tandem on his paraglider. 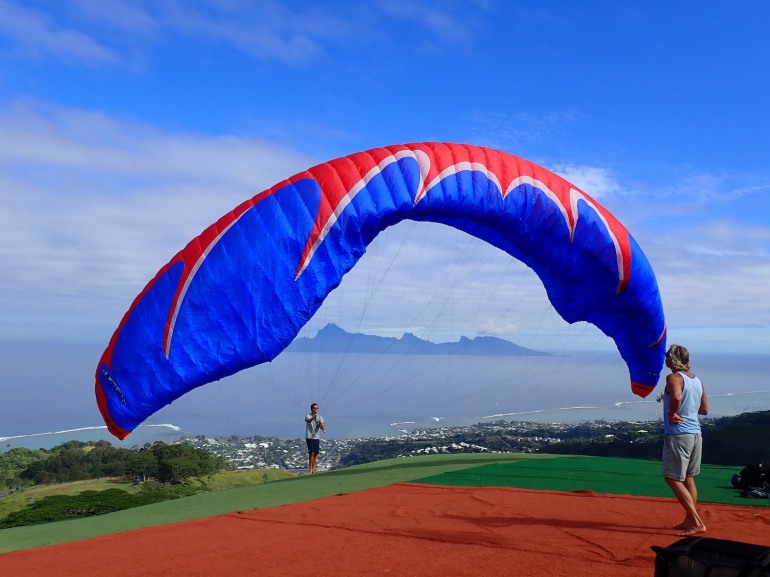 Conditions weren’t perfect for my flight, which was lacking in breeze (run faster down the hill) and thermal lift, but by the time Dawn took off, the mountain had warmed and they were able to soar from 540m at launch up to 870m and cruise indefinitely.  Finally descending out of the clouds, over the treetops, the lagoon, and in for a soft touch-down behind the beach.  Thanks Jørgen! 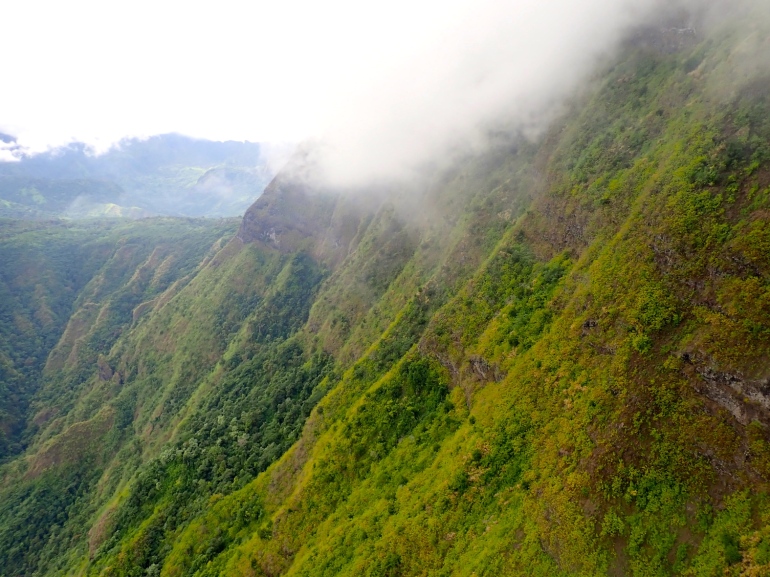 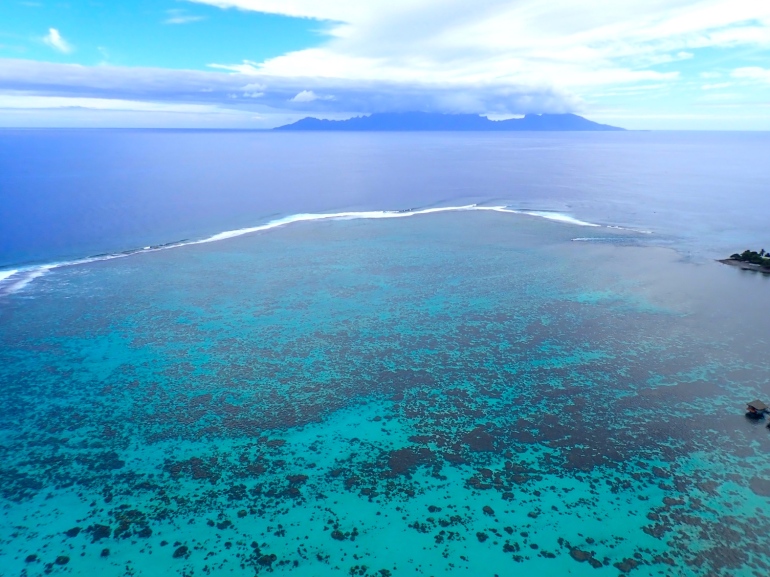 I have been on the boat for six months now, it’s time to go and catch up with our life at home.

We’re flying away and leaving Escapade on a mooring in Tahiti.  Jemima will be living on board, keeping an eye on everything, and not throwing any wild parties. 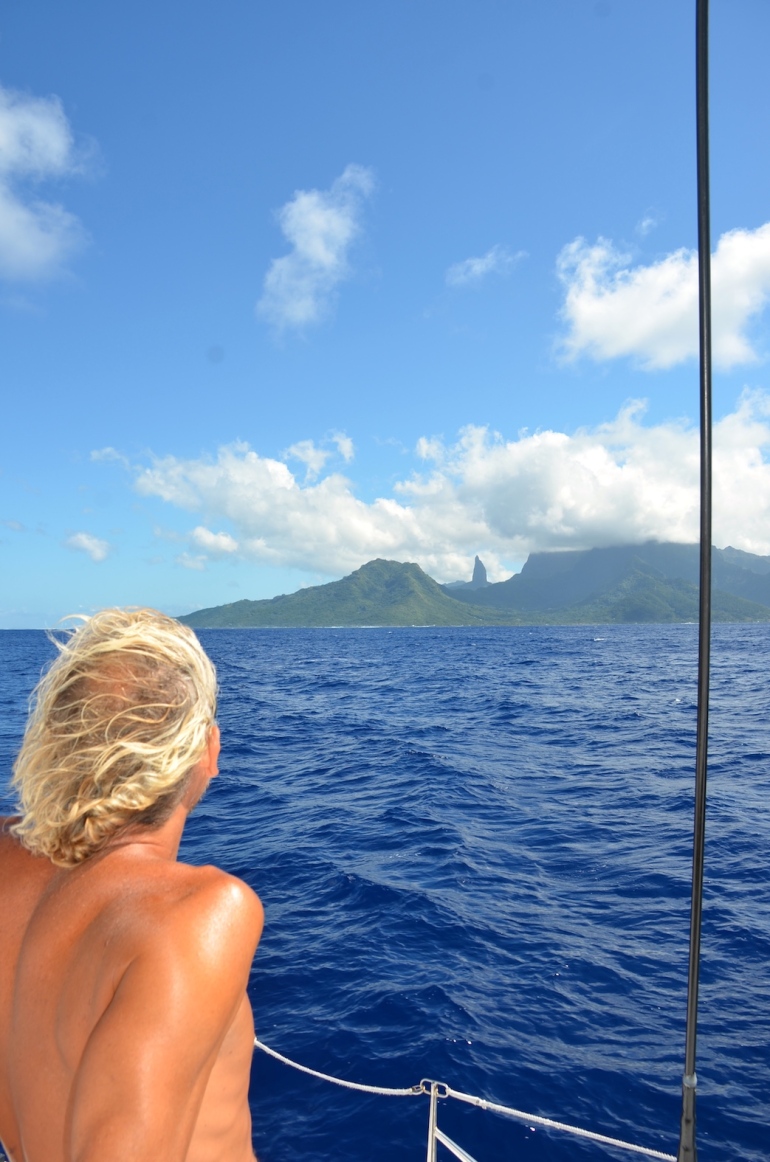