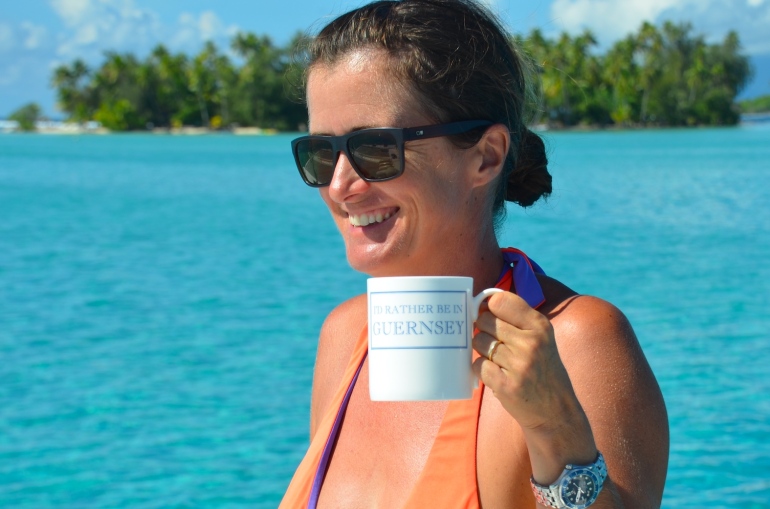 We sailed north from Fakarava to Toau again, but this time to the ‘Anse Amyot’ on the north side of the atoll.

It’s looks like a wide open pass into the lagoon, but there’s no way through the shallow reef across the inside, so it’s really just a dead end between two motus.

A ‘faux passe’, or as we would say in English, a cul de sac. 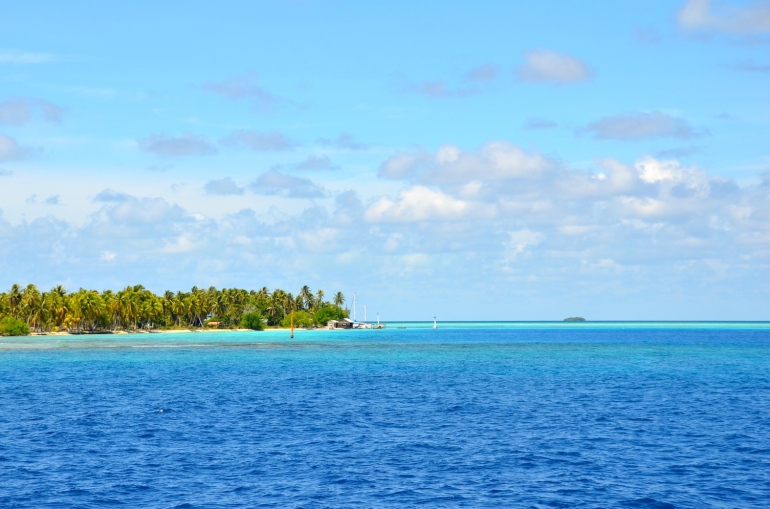 It offers perfect shelter, a calm anchorage surrounded by 350º of coral.

And it’s another lovely coral garden, with good spearfishing along the reefs outside, which drop from a sunny 7m plateau, down a wall to the spooky dark blue depths of 200m or so. 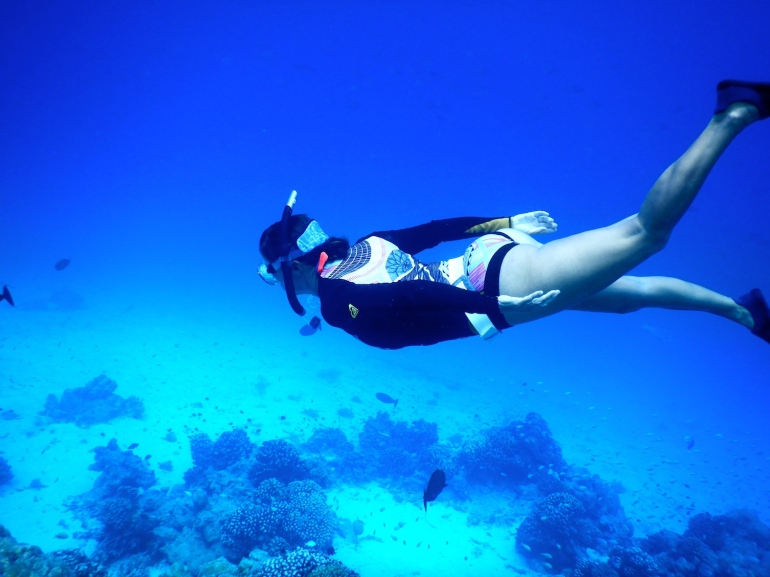 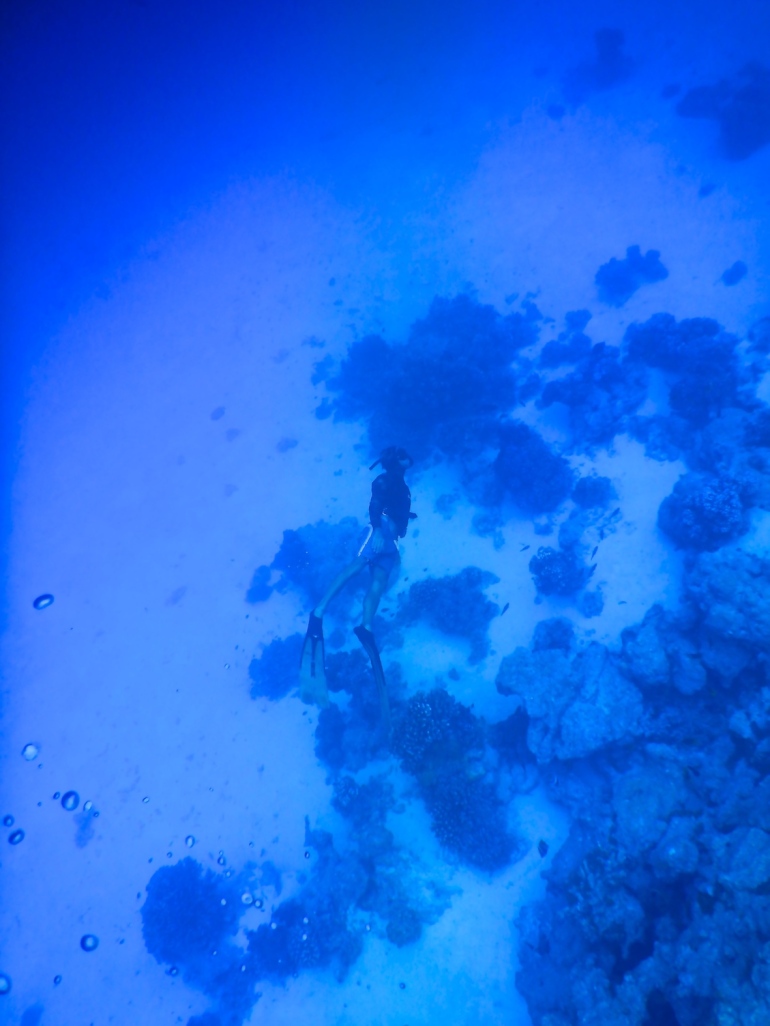 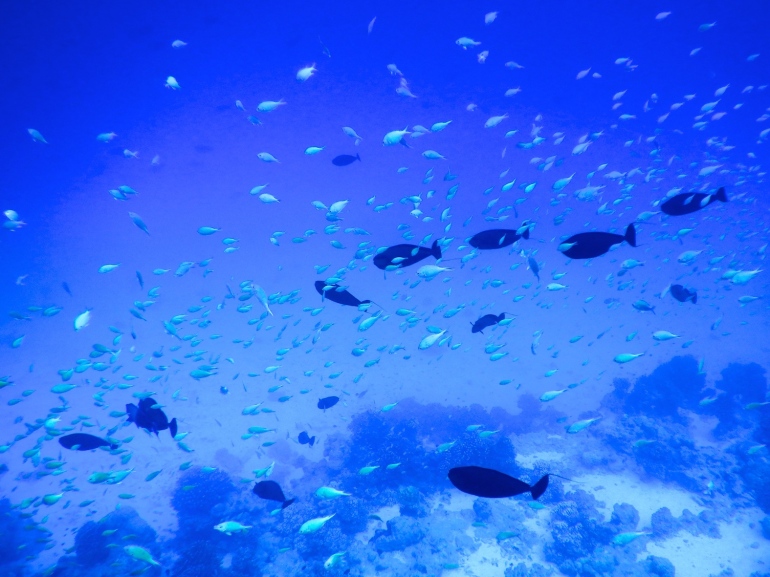 Ashore the motu is run by Gaston and Valentin (Laiza’s older sister). 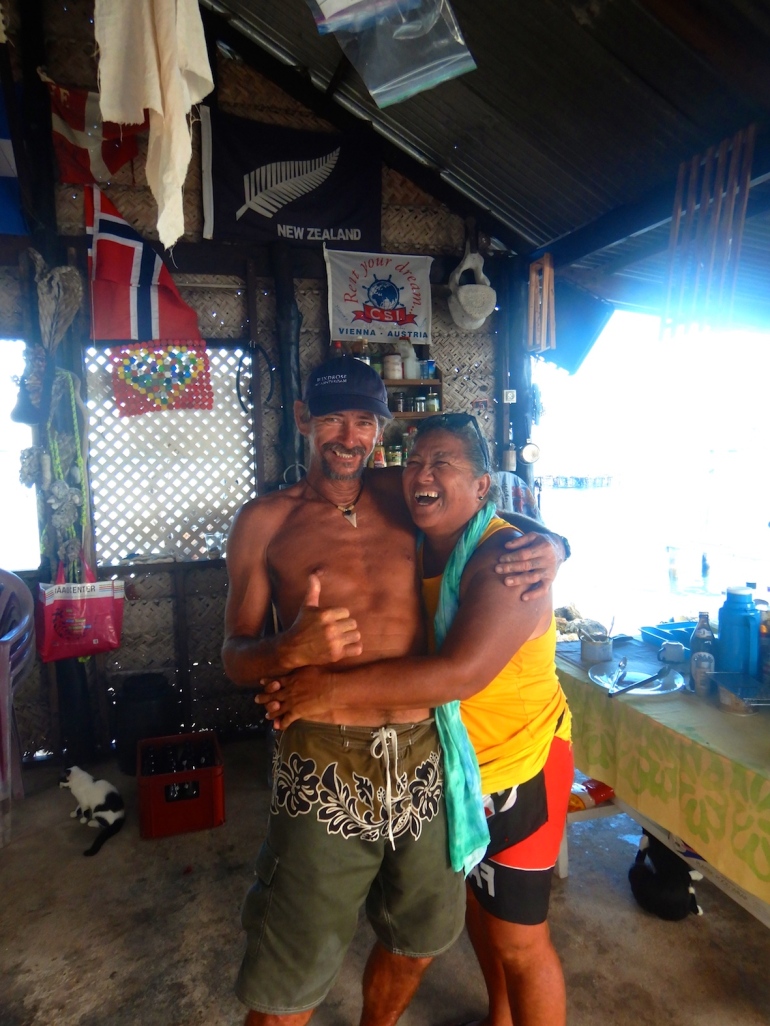 Here they are growing breadfruit, pamplemousse and some vegetables, planting coconut groves and running a little restaurant whenever there are a few cruising yachts to feed. 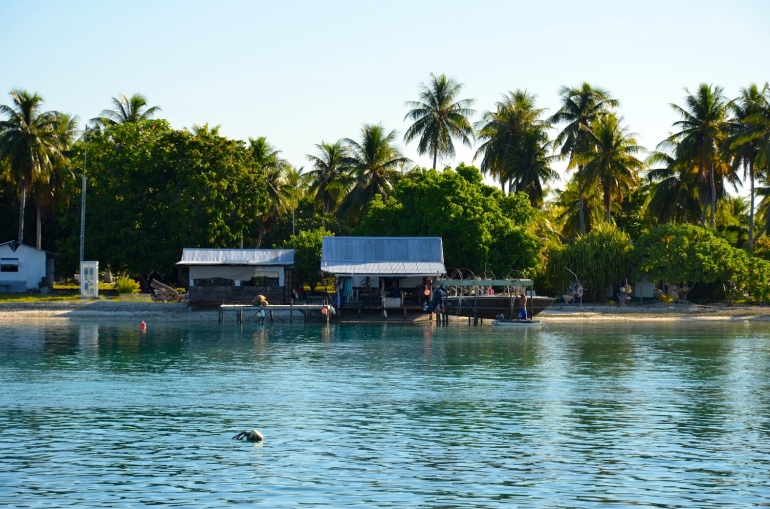 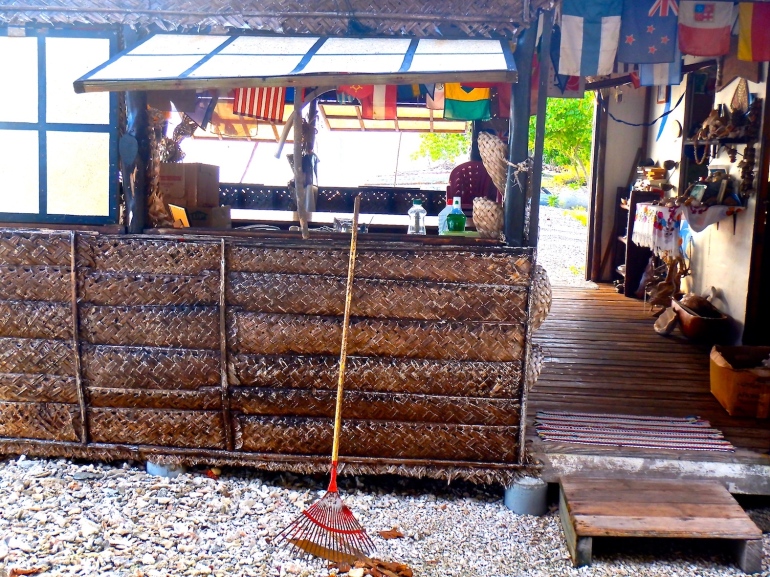 We ate our first ‘varo’. A strange sort of lobster that lives in the sand and snares its prey with vicious, needle-like claws before dragging it down into the burrow to be devoured. 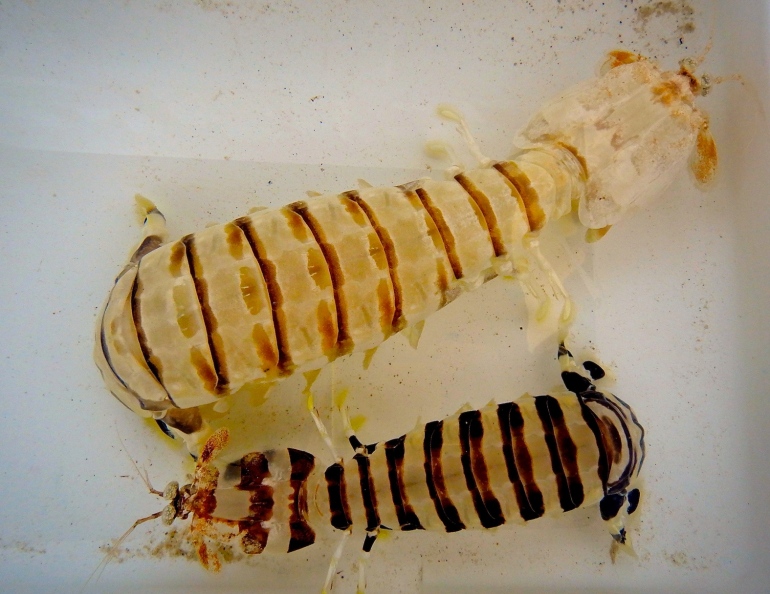 Gaston is a master at hauling them out once they get their claws in to his fish bait.  He cooked one in butter for us, sweet and delicious. 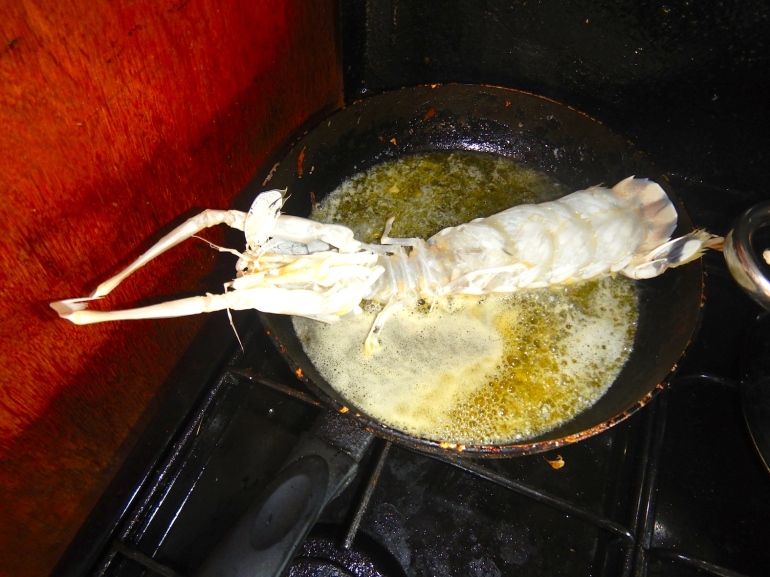 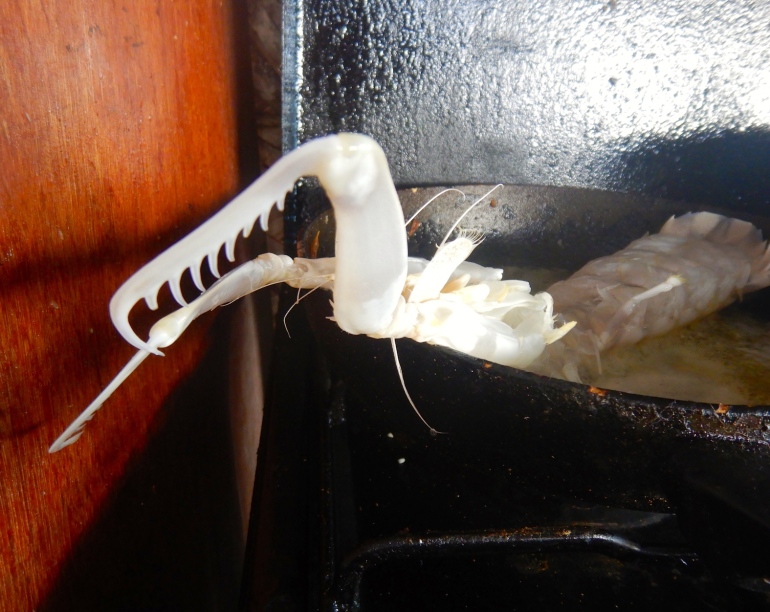 He also reaches into dark sandy tunnels deep in the jungle and pulls out ‘kaveo’, coconut crabs. 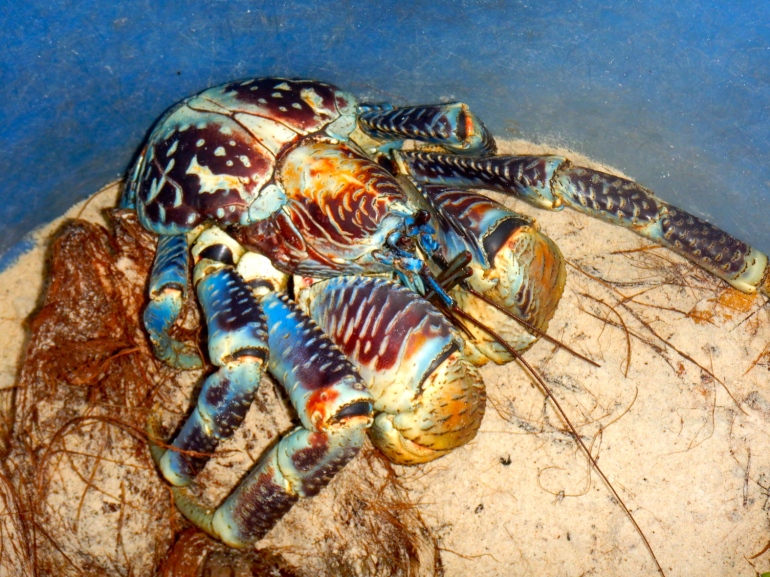 Laiza is a devout Christian and Gaston built her a tiny chapel on the motu.  Every Sunday at 10.00 she conducts her own service, accompanying herself on the ukulele. 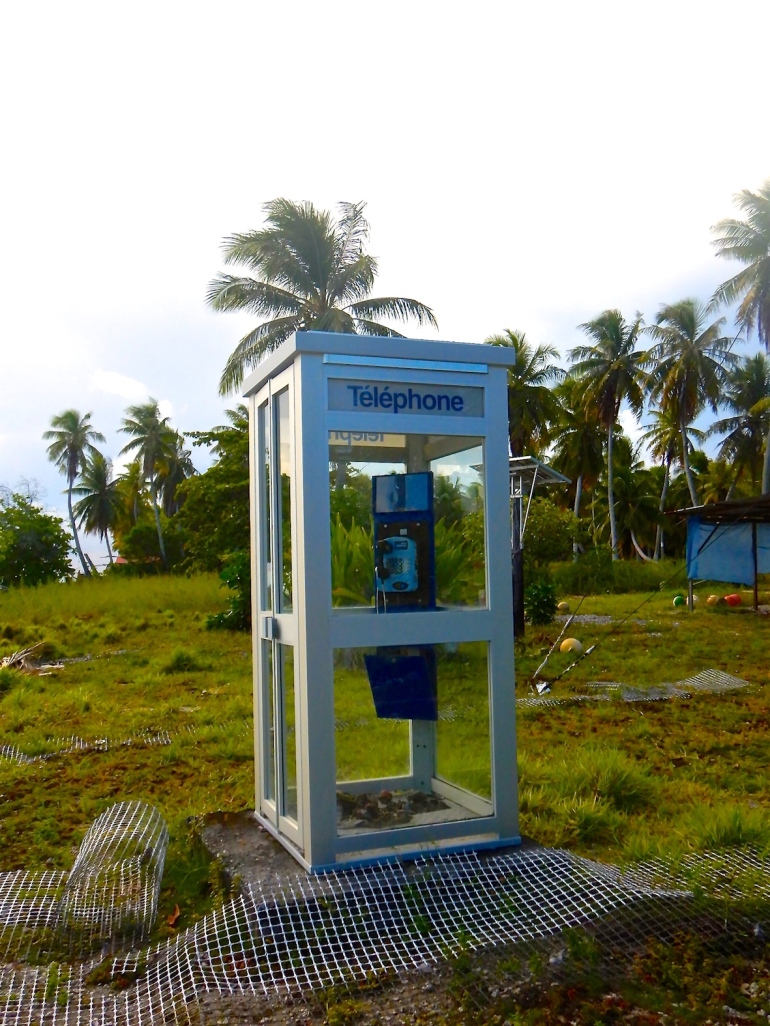 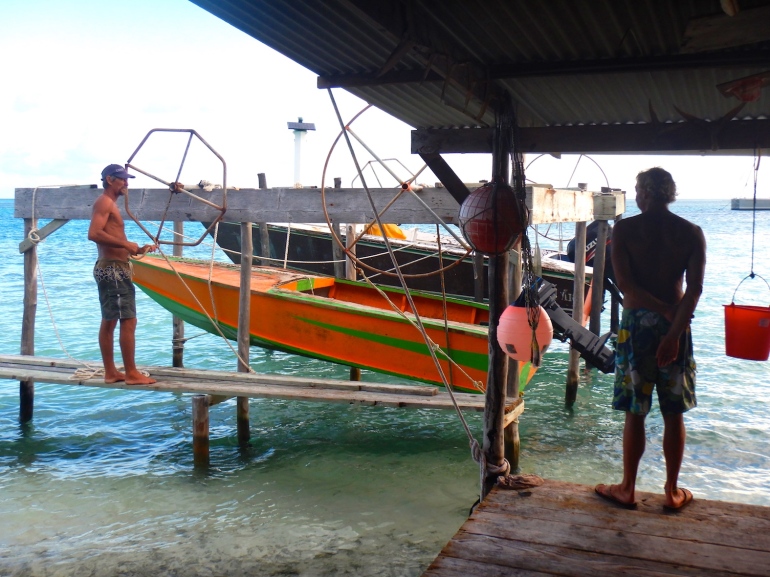 On a tour of their motu, Valentin pointed out the charred remains of a coconut palm struck by lightning.  A leafless black stump.  That night, Dawn and I both lay awake thinking of that tree as an electrical storm raged for hours.  Our carbon mast reaching into the stormy night above us…

The computers were safe in the oven and the water tanks were full by morning. 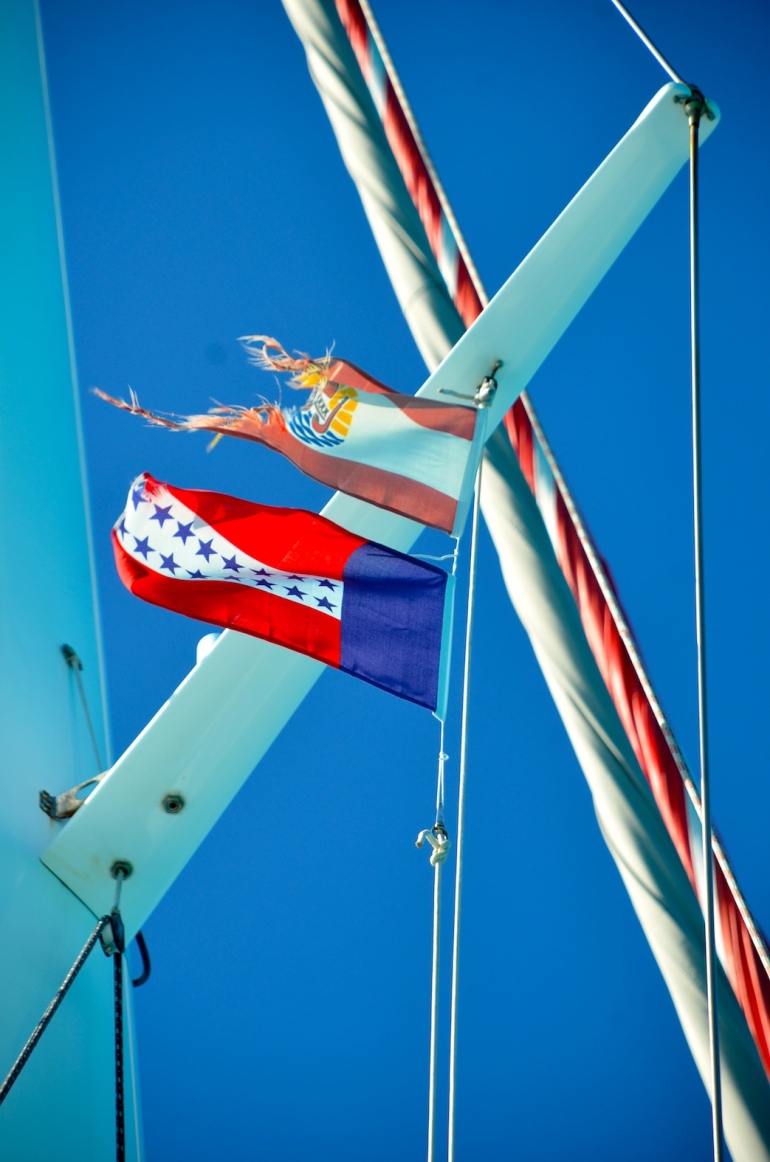 Finally the weather cleared and it was time to sail away from the Tuamotus.  After four months of exploration we have visited eight atolls, there are about eighty more!  Fi took this photo from the plane window on the way in to Fakarava, somewhere over the atolls. 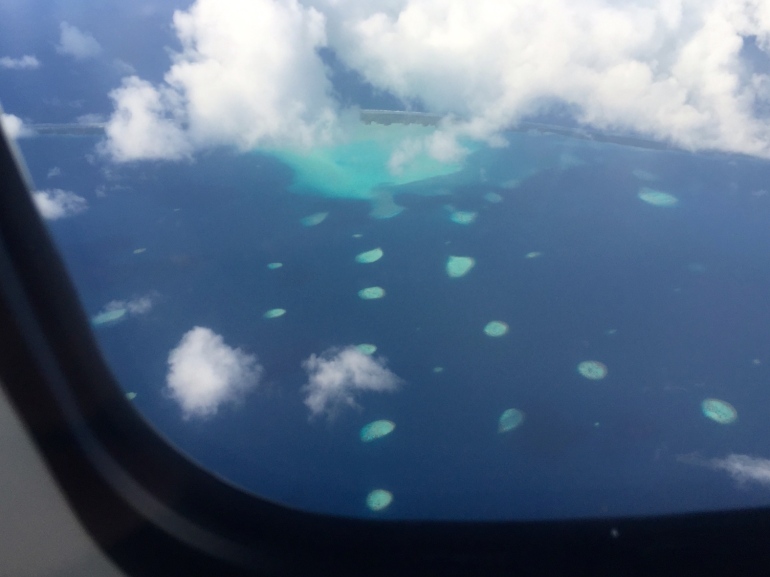 That sandy plateau looks like a promising anchorage!  Wonder where it is, I’ll search on Google Earth.  The Tuamotus keep inspiring. 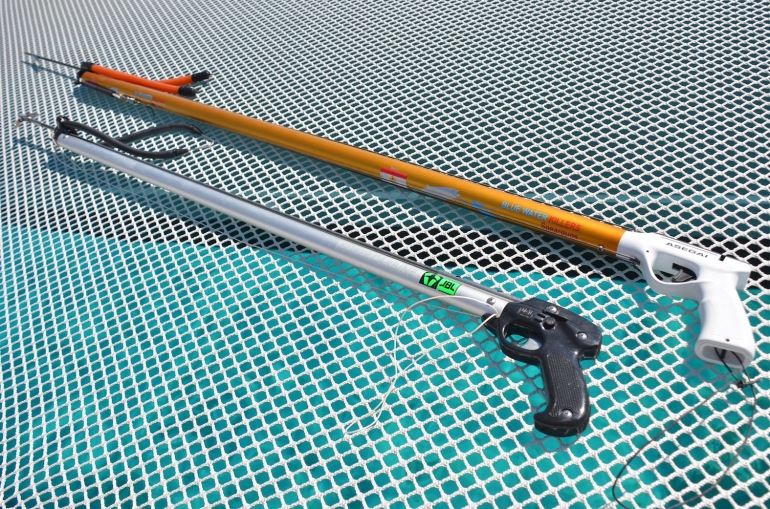 I have owned three spearguns now, I bought the first one in Guernsey where I failed to shoot a bass.  It scored us a few meals in the Caribbean before I donated it to a Guna indian on a San Blas island.  His need was greater.

I bought the smaller one in Panama last year and it has worked very well.  It had two bands (one broke) and is a good, short-range ‘grouper gun’.

The gold one is my new upgrade, custom made for me by Marc Alexander in Fakarava and a pretty good hit-rate so far! I’m still keeping it simple, no reel of line to get tangled in, and my technique is improving, we have eaten a lot of speared fish this season.

Return to The Society Islands

We covered the 230 miles to Tahiti in 24hrs. Sailing a fast broad reach under full main and gennaker all day, replaced that with the jib for the hours of darkness, and were double reefed by morning, trying to slow Escapade down so we could arrive in daylight.  I woke to see the green mountains of Tahiti again. Mountains! After so long in the two-dimensional atolls, where nothing is higher than a coconut palm. 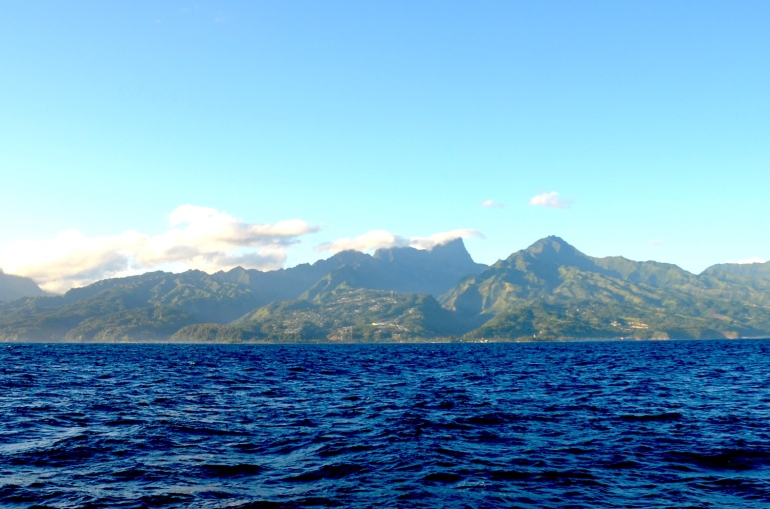 Then the towering spires of Moorea! 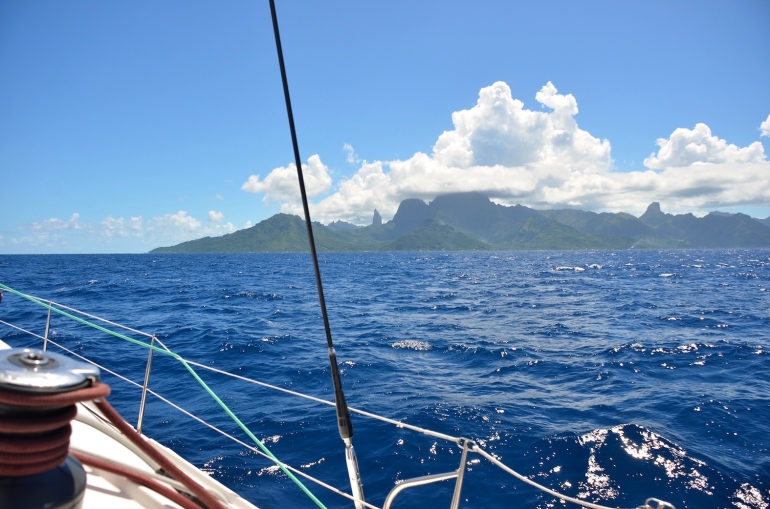 Back to a favourite anchorage at Ha’apiti.

From here I can monitor the number of surfers at the pass, picking my moment to dinghy over and score a few waves when it’s not busy. 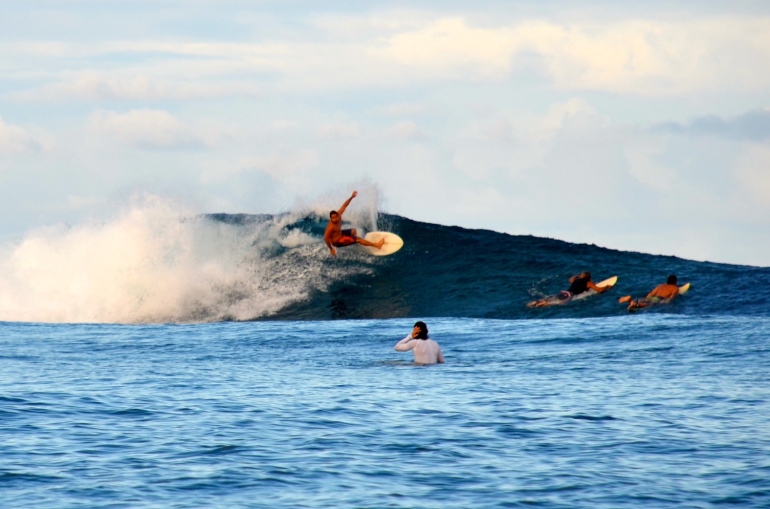 An afternoon session with just one other surfer. A long-standing French resident who reckons he surfs Ha’apiti 300 days of each year. That’s pretty consistent for the local break! And he doesn’t own a wetsuit. The other 65 days he says there are ‘too many waves’. (It gets swell from several directions, sometimes all at once.) But if that happens, he has a few other spots nearby to choose from. 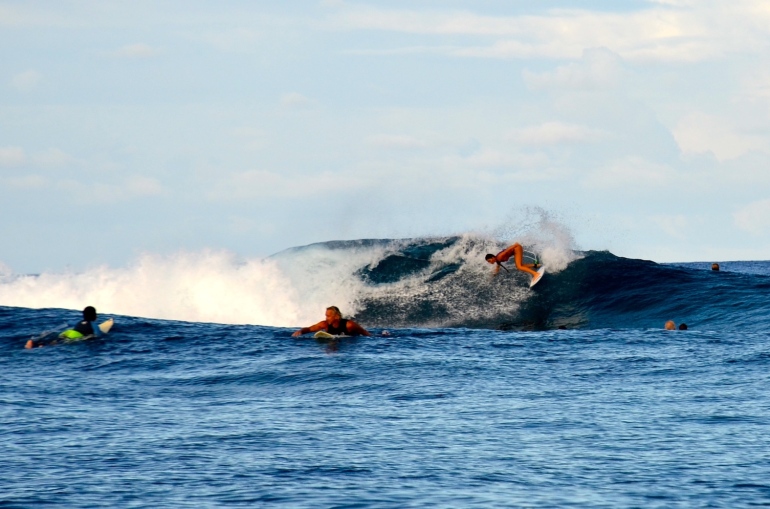 So then one last night at sea, up to Huahine, across to Taha’a, and finally to our haul-out spot in Raiatea. Time to reflect at the end of another magic season.

We were in the Tuamotus from December to April.

It can be challenging, remote atolls, few supplies, no internet, but they are usually the most appealing! This year we were living further from civilization and closer to nature, for longer, than anywhere but mid ocean (which the Tuamotus are!)

Living with the reefs, the fish and those sharks, every day. “Full immersion” in the turquoise bubble. 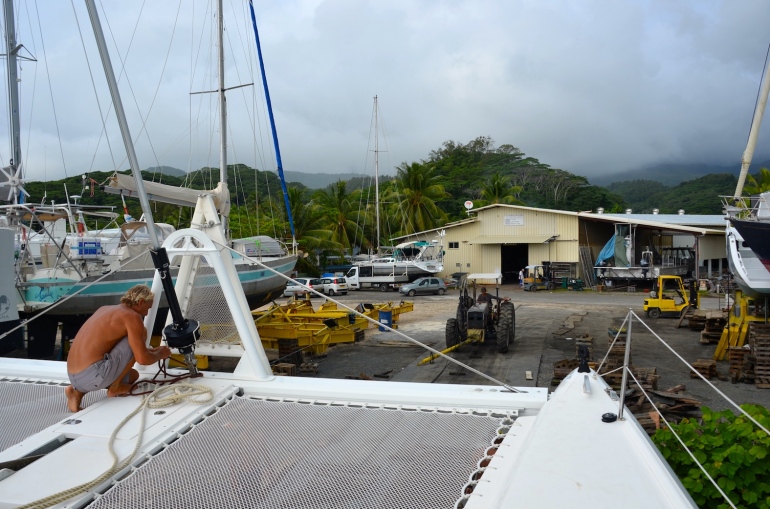 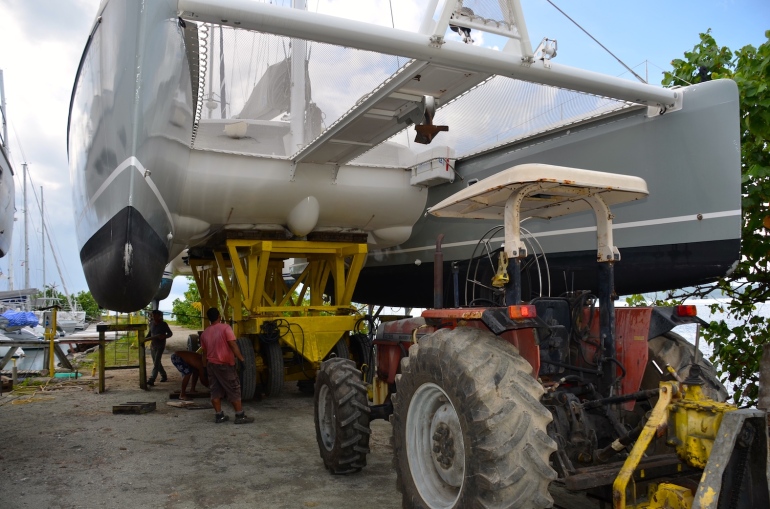 Fish out of water

Now Escapade is up in the yard and we have moved into a little house while we do the sweaty ‘yard work’. Preparing her for another hibernation while we have a Guernsey summer. 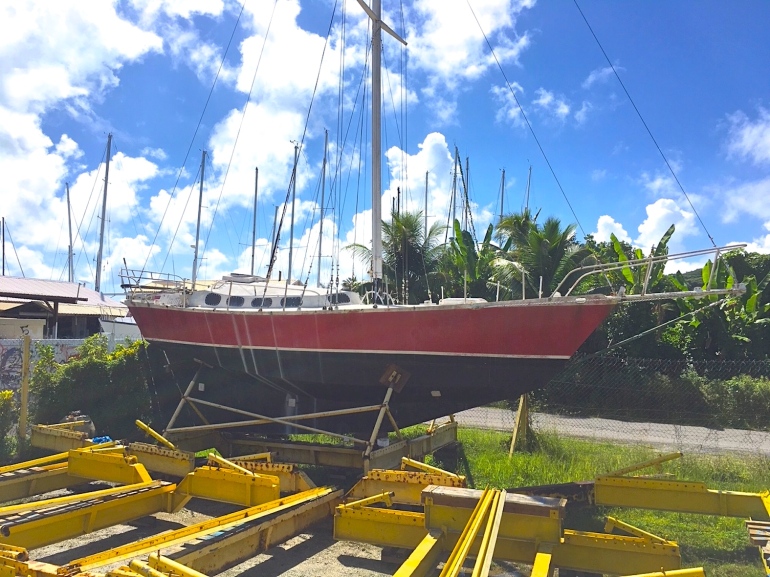 From the house we can see yachts anchored in the lagoon.

It’s very hot ashore! There’s no breeze, and lots of mosquitos. I haven’t seen the sun set or the moon rise since we moved off the boat. I’m feeling disconnected from my element already.

It’s so much nicer to be out there looking in to the island, than being ashore looking out to sea. 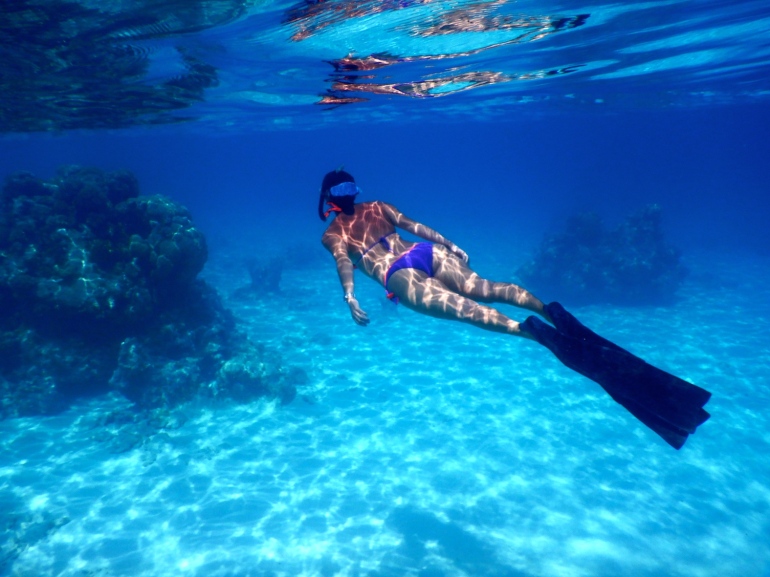