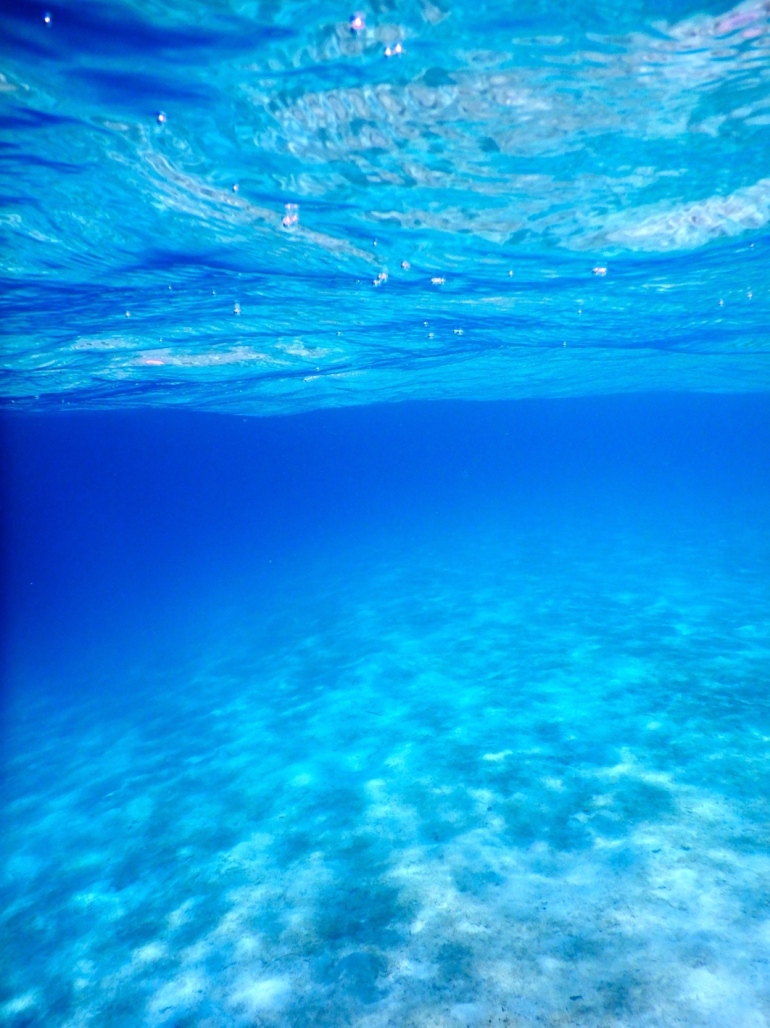 Roosters in the mango tree.

Another house, another tropical garden.

We have flown south from Hawaii to Tahiti, switched hemispheres, from Maui winter to Polynesian summer. 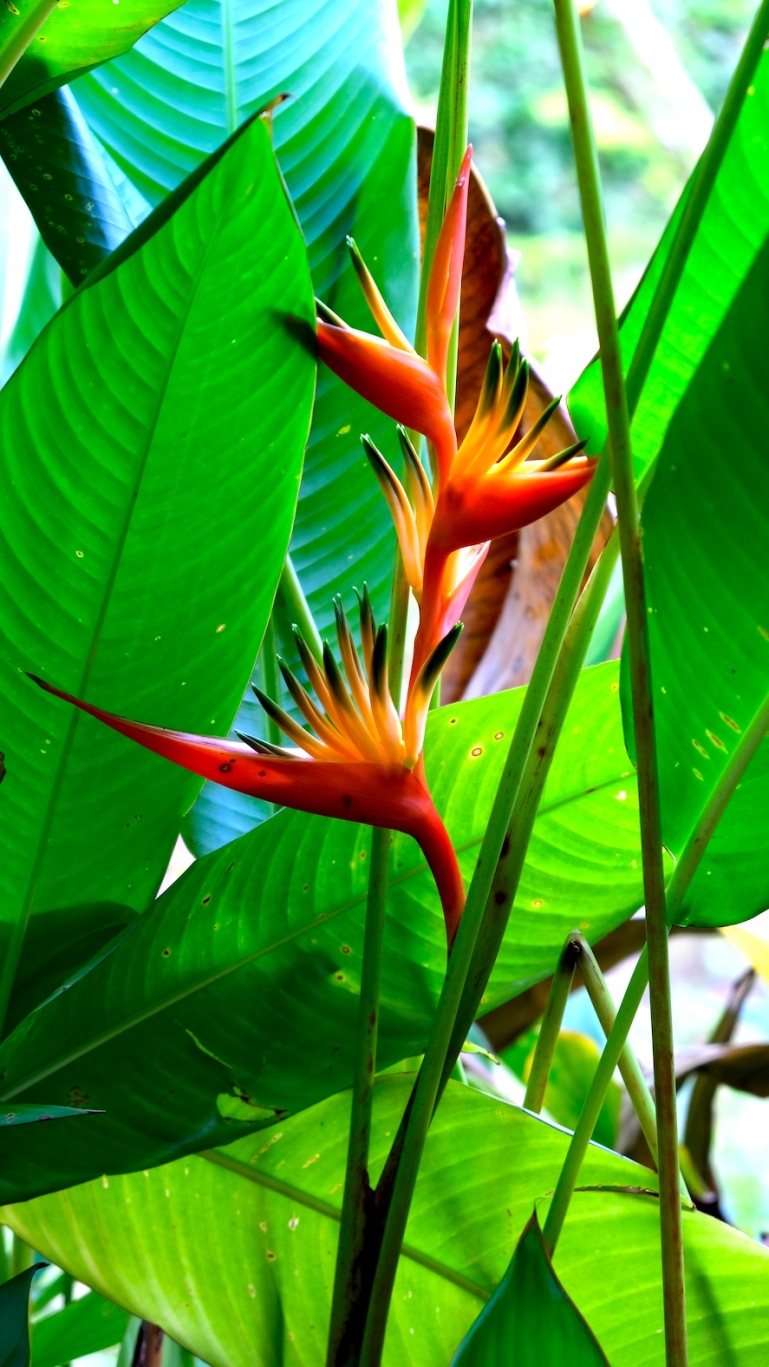 Now we are back in Raiatea where Escapade has been well cared for at Chantier Naval Des Iles. 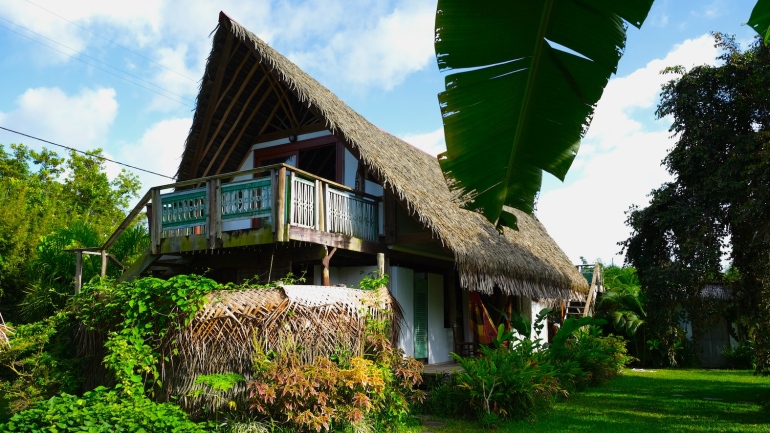 While we prepare to re-launch, we are living in a local house for a few days. A traditional faré with a thatched roof and no walls.  A sleeping platform up in the roof feels like a tree house.  The garden is festooned with local goodness: coconuts, mangos, pomegranate, avocados, bananas, pamplemousse and papayas ripening all around us.  It’s a lovely retreat when our sweaty boatyard chores are over.  The only real problem is the deafening cock-a-doodle-do which starts at around 5am. Earplugs help but it sounds like the damn bird is right next to our pillows.  Our landlord Fabrice explained that the cockerels like to climb the mango tree behind the house.  Perfect.

Anyway it’s good to be up early before the boatyard gets too warm. 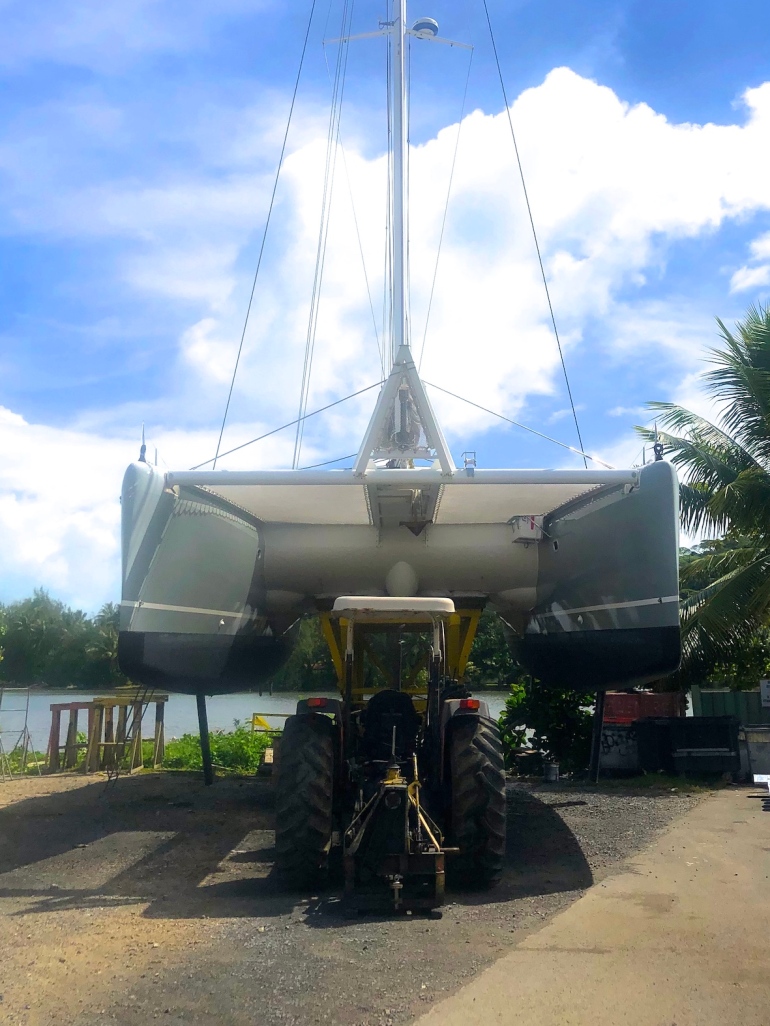 I have written before about our life in tropical boatyards, never my favourite part of a sailing season but all part of the story.

Anyway it’s so much nicer to be putting it all together again at the start of the season than packing it all away.

When we lay her up, we strip the deck of all running rigging, halyards get pulled up into the mast, so everything’s protected from UV while we’re away.

Now it all comes back out and the boat starts to look shipshape again.

With every task we are working through the transition back to boat life, thinking about the season ahead and gradually shifting back into the mind-set of living afloat.

Away from distractions and towards practicalities, problem solving and the daily routine of sailing, provisioning and fishing. Self reliance, tuning back in to the elements, the ocean miles ahead of us, it’s a big mental shift from living ashore.

While climbing up and down that boatyard ladder I sometimes question the amount of hard, sweaty work the boat demands from us, but the question always finds the same answer.  It’s a small price to pay.  This boat is our ticket to another world.  There is no other way I know to live so freely for months at a time.

So for a few more days, it’s up and down that ladder. 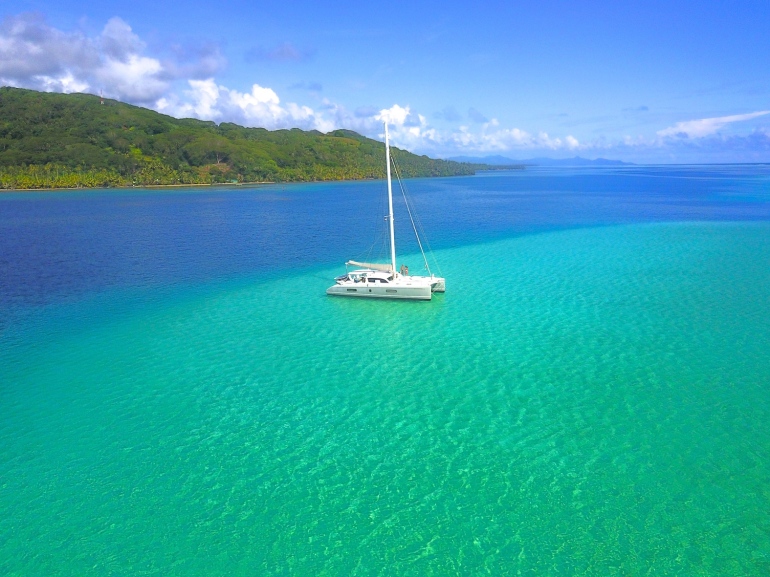 We’ve launched!  Out into the lagoon at Miri-Miri, Escapade suspended from an anchor chain again.  Floating just above white sand, while I’m wind-foiling round the neighbourhood, dodging coral heads and coconuts floating by. 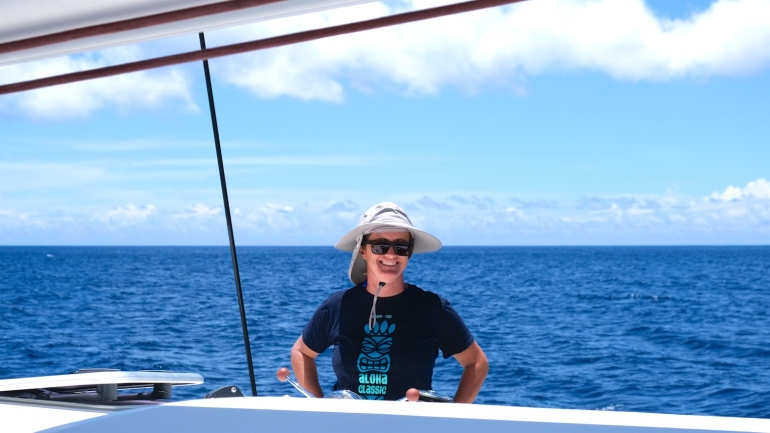 We decide to start with a lap of Raiatea, because apart from the boatyard we really haven’t seen much of this island yet.  First trip is a gentle motor down the coast (we haven’t even got the jib out of it’s locker yet). 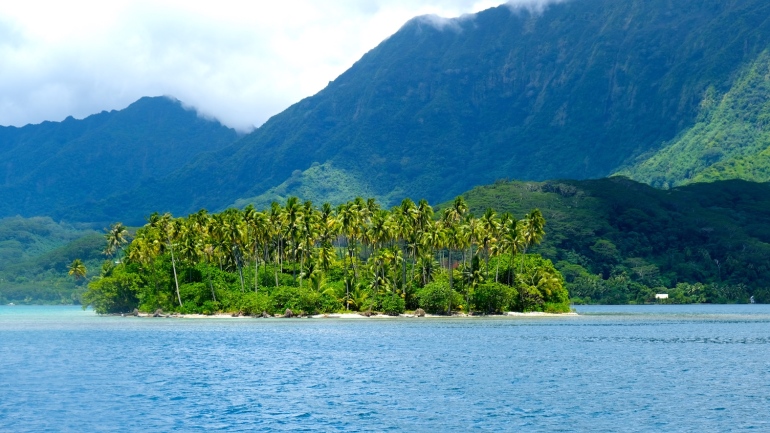 We tuck back inside the reef at Passe Toamaro and anchor on another shallow sandbank.  To our right is a large mountain, really a huge cliff face. (Mt Tefatua 1017m) To our left the Pacific is breaking on the barrier reef and up ahead is a charming little motu, which I have just read was once owned by Diana Ross. (The Motown Motu?) It sits just inside another pass, where long mellow left-hand waves peel down the reef, perhaps Diana is goofy-foot longboarder?

Talking of surf, well, we really shouldn’t.  The locals have strict rules here, no photos, no social media, no surf ’business’ or journalism.  They are trying to protect their dream, but it’s tough to keep a secret spot these days, Google Earth has a lot to answer for.  Anyway the waves can get as heavy as the locals.  Look at this one I snapped as we were leaving through a pass.  Can’t remember where.. 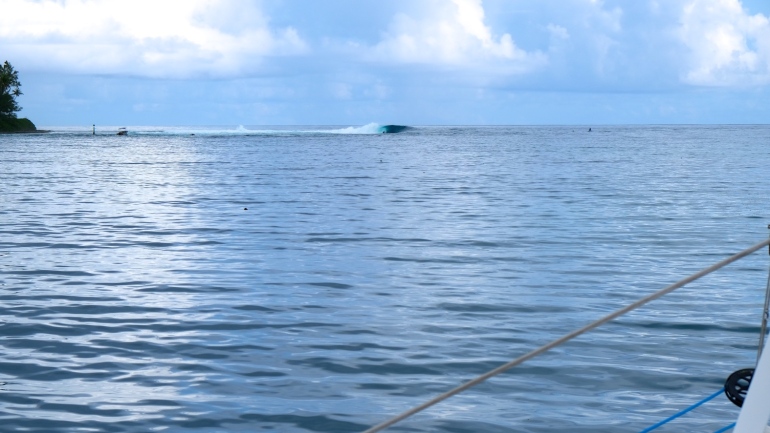 So here we sit, in a few feet of clear calm water. Flounders and puffer fish snuffling round the anchor chain to see what snacks are stirred up for them as it rakes over the white sand seabed.

Showers and rainbows sweep over the green mountain. 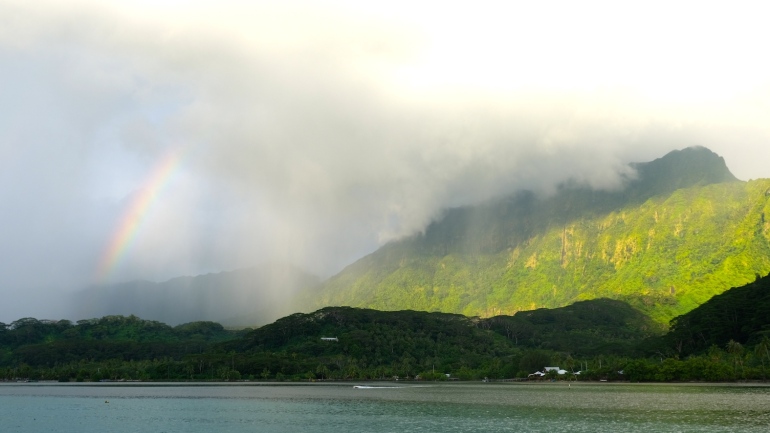 As if all that were not enough, there is a little restaurant here with a dock to tie our dinghy to. 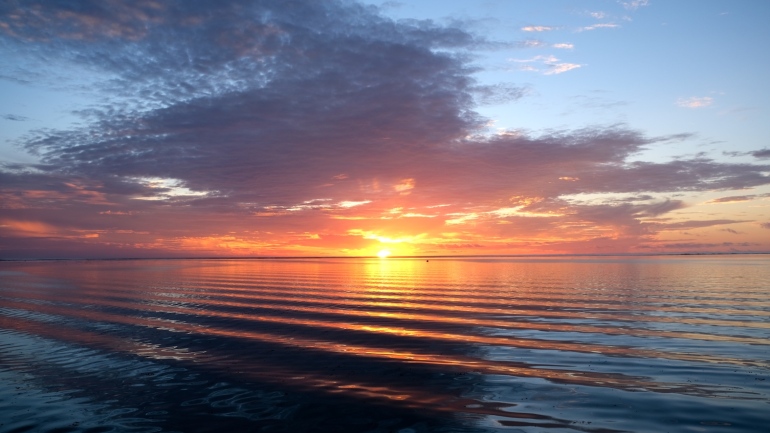 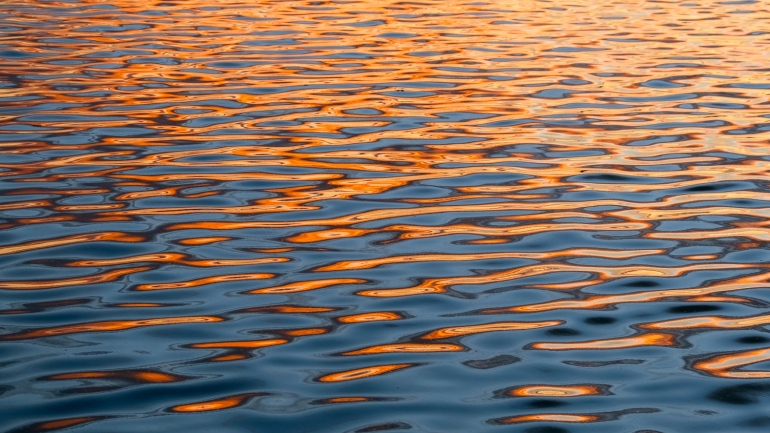 We were greeted by a pod of spinner dolphin. 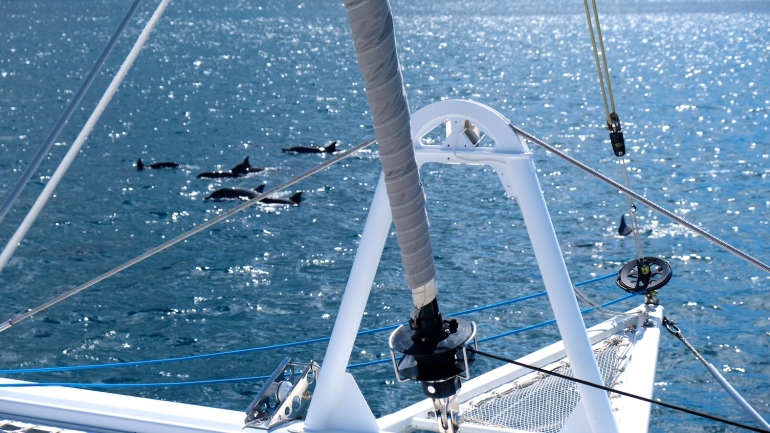 These sandbanks are home to stingrays and spotted eagle rays.  Here’s one I spotted:

Then another couple, possibly mating: 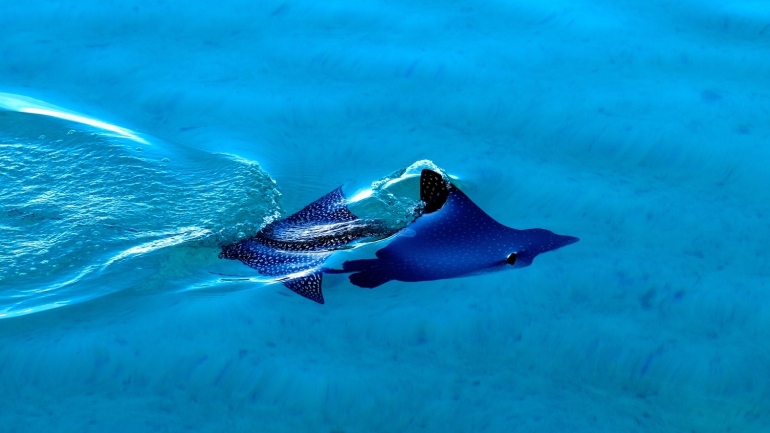 Beautiful spots from above, but look at the markings on the underside of the wings, never seen that before: 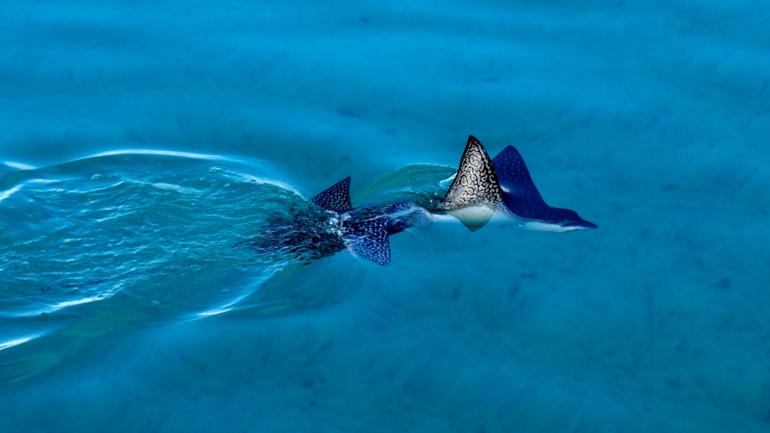 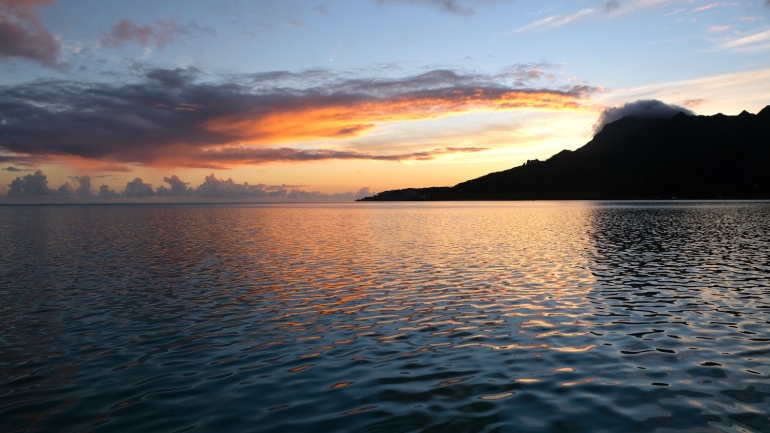 This sensation of windsurfing on a foil is still providing plenty of stimulation.

In light winds the trim is so subtle, responding to the aerofoil in my hands and the hydrofoil beneath my feet, the combined effect is still magic for me.

This unlikely flight.  Silent, efficient and so enjoyable. 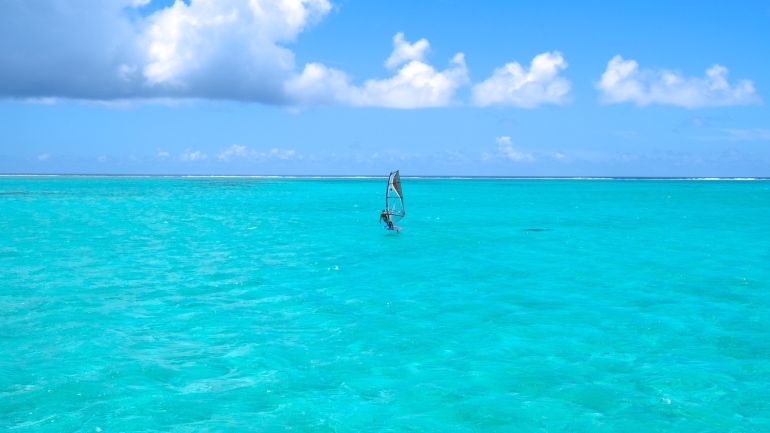 Today I was riding in very light wind, just enough to sustain flight on the foil but barely enough to get going again if I dropped back to the surface.

In this wind a conventional windsurfer would be hardly moving, certainly not planing.  It would be trapped by the forces of gravity, drag, the wetted-surface of the board and inadequate lift from the rig.  Yet I have transcended all those laws of physics and here I am flying along faster than the wind.

Like a seabird taking off, I have to flap my wings vigorously for a few seconds (full-cardio sail pumping!) and then I’m in to an effortless, low-level glide.  Enjoying the efficiency of the wings, feeling the flow over the foil surfaces.  That wetted surface is drying in the sun. 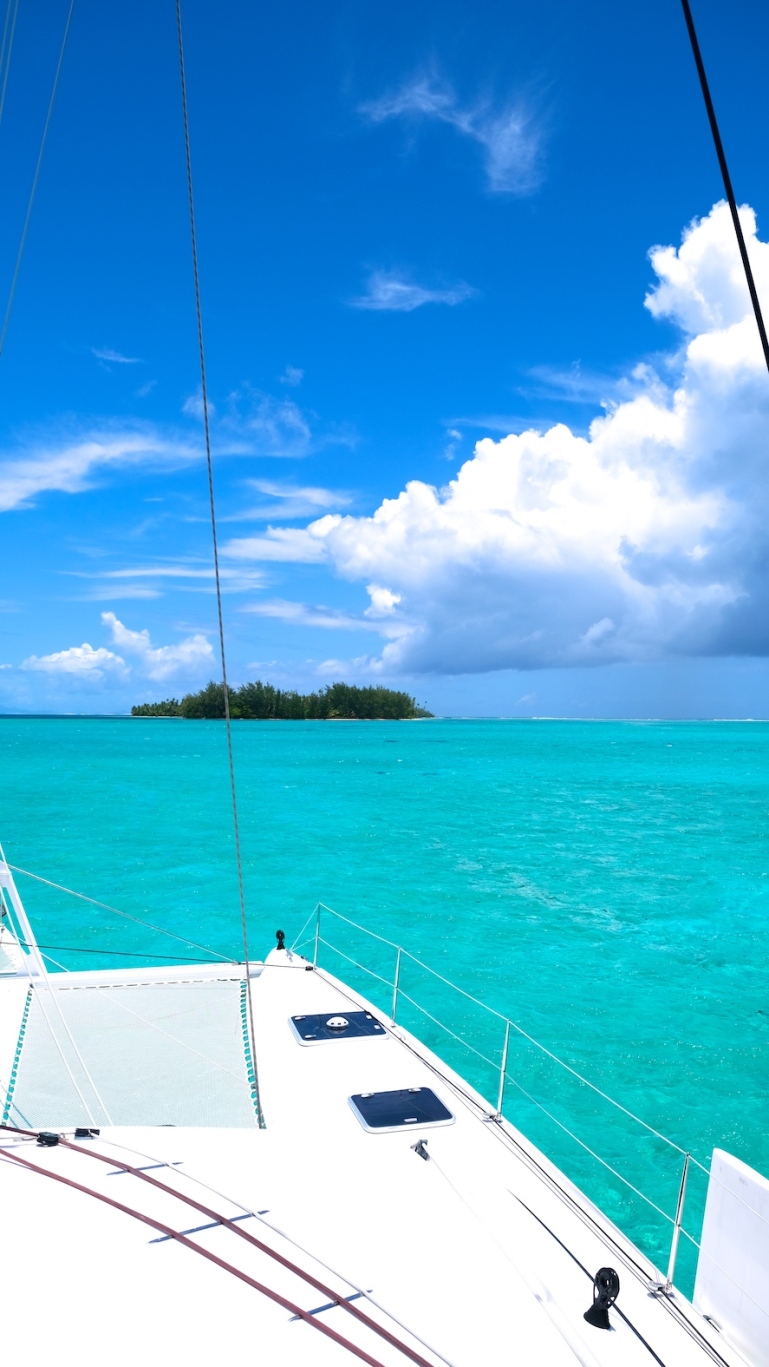 I left the boat and foiled to windward, exploring new territory.  Out over the shallow lagoon, glaring aquamarine, slaloming between coral heads and surprising the stingrays on the sand below.  Out at the barrier reef I gybe on to the next beat, over the edge of the sandbank in to the deep channel, the water fades from turquoise to deep blue, more breeze out here, I lean in to the power and knife upwind.  On past a tree covered motu, dodging floating coconuts, I‘m a mile upwind of the boat now.  Here’s an oily-smooth patch of water, like glass, must be a current from the reef pass, it looks so strange to be sailing over a completely mirror-calm surface at this speed.  Then out through the pass, waves breaking on the shallow coral both sides, that fizzing ozoney scent in the air coming off the reef, and ahead the dark blue open ocean.

A smooth swell is swinging round the end of the reef and walling up across the pass.  I gybe on to it and let the sail go into neutral.  The foil feels the wave and I push down to keep it working as the swell sucks water up it’s face.  Trim.  I can see coral below, I’m actually not moving forward over that reef, the current is flowing out through the pass and up my wave as fast as I am trying to foil down it.  Suspended animation.  I hit the gas and glide down the wall to into deeper water as the wave wraps in to break on the reef flats.

I am completely absorbed with the sea, the breeze and my carbon-fibre magic carpet. 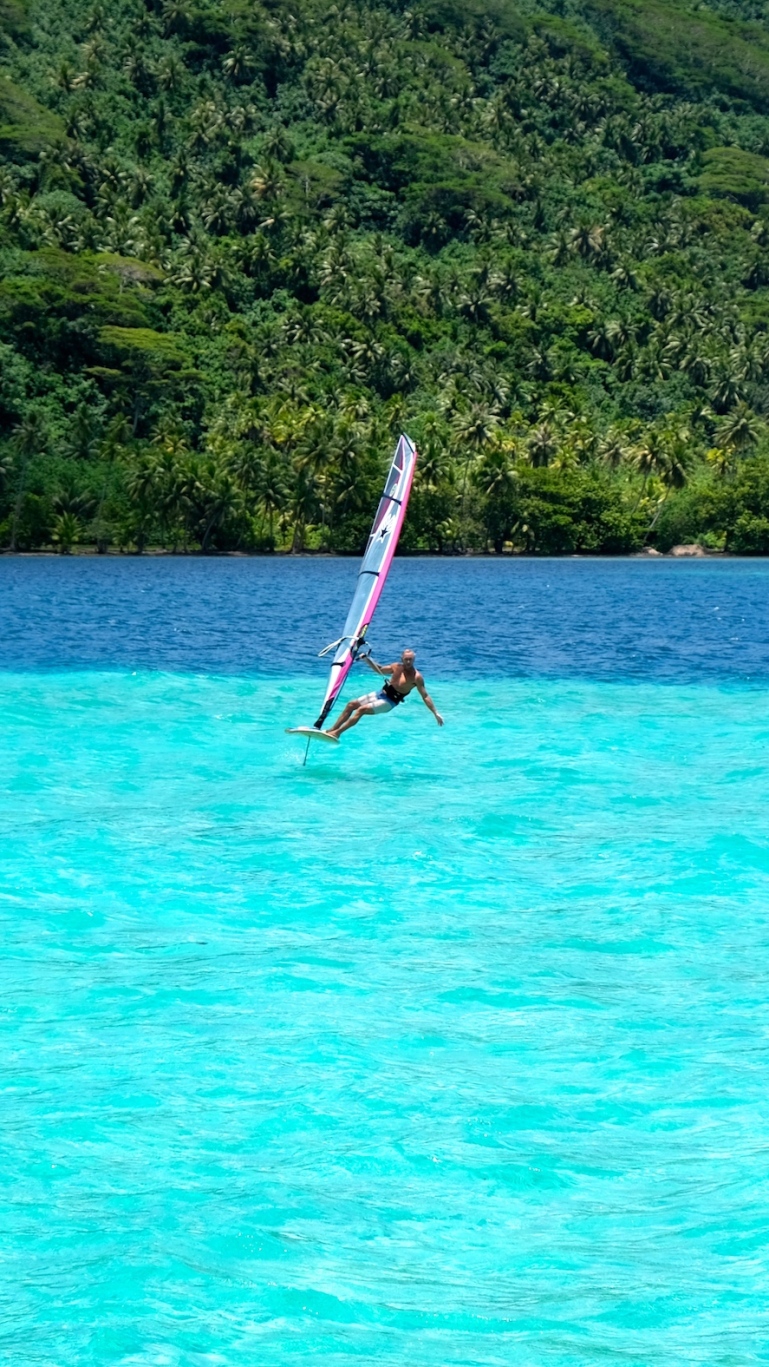 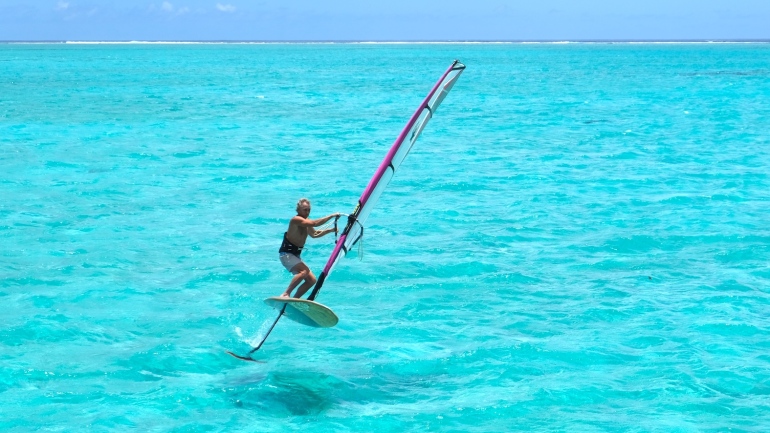 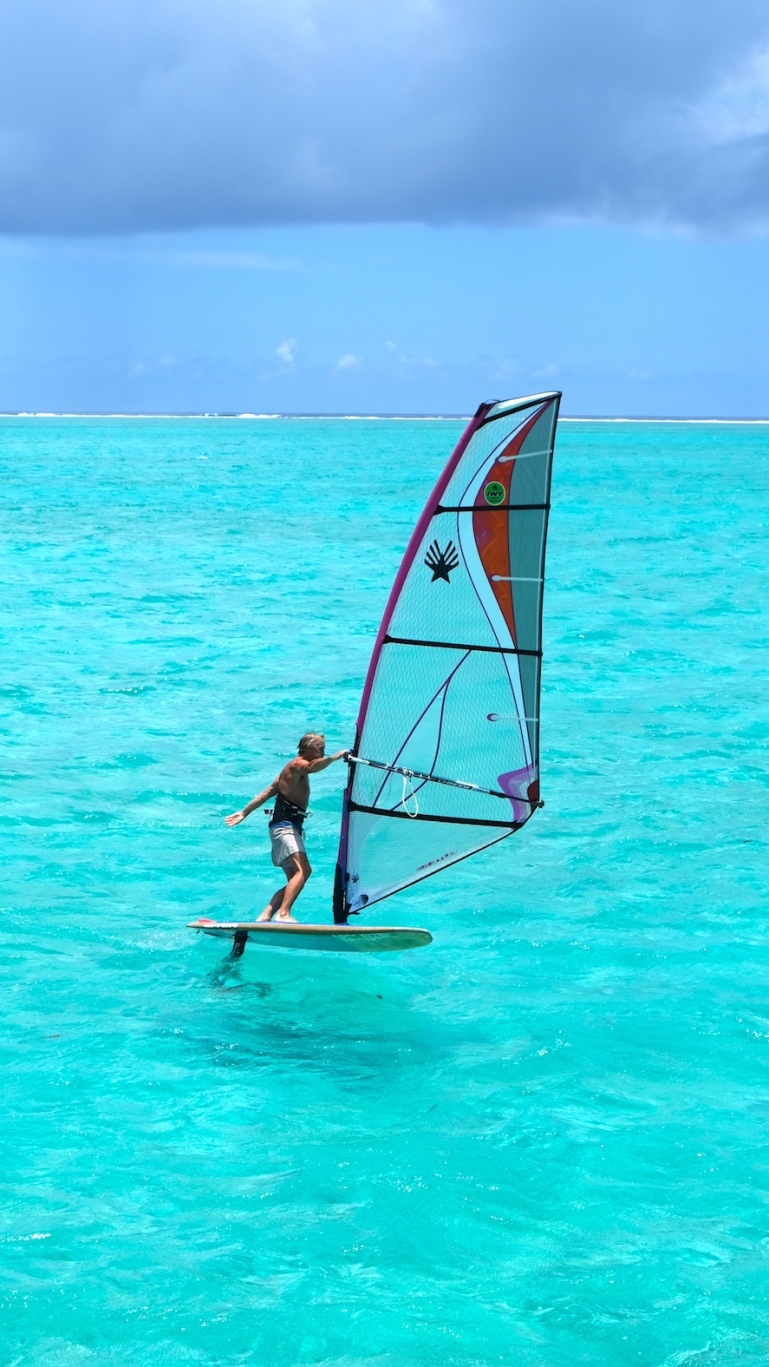 On the east coast of Raiatea is the most important site in Polynesian cultural history.

The Marae on this peninsula are believed to be the centre of the vast Polynesian migrations of the 10th century.

From here, navigators set sail in timber sailing catamarans and populated hundreds of islands across the Pacific: north to Hawaii, east to Rapa Nui and west to New Zealand.

The Hawaiian people, Maoris, Easter Islanders, plus the Tuamotuans, Marquesans, Cook Islanders, Line Islanders, can all trace their ancestry to this site. It was here that sacrifices were performed and permission was requested to sail out through the pass for each voyage.

The site is constructed of lava stones. Tall standing stones facing in from the ocean, then flat rectangular ‘paved’ areas which were the centre of ceremonies. 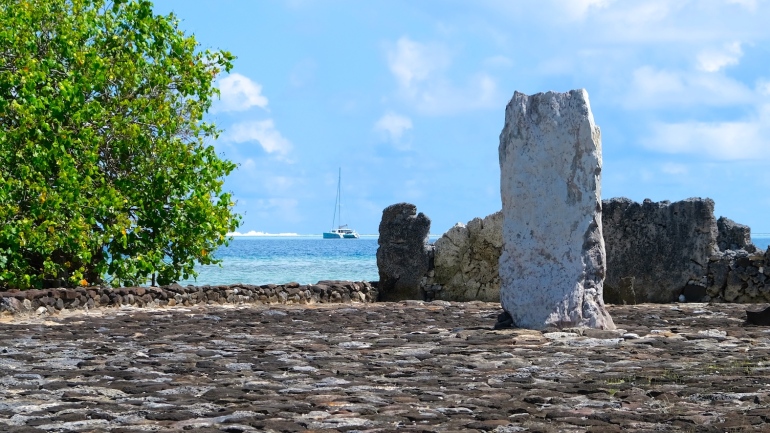 Stones from here were carried on the sailing canoes to each new settlement.  Lava rocks from here have been found in all of those distant islands.

When Captain Cook was here the chiefs laid on a human sacrifice in his honour, on this very spot.  Apparently he was offered an eyeball which he duly swallowed. Nowadays you are more likely to offered a baguette from the food truck, but it is still a special and mysterious place.  Also now a UNESCO site. 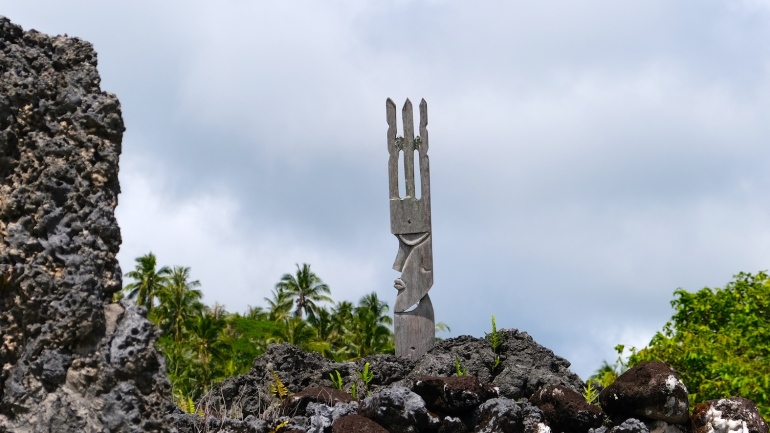 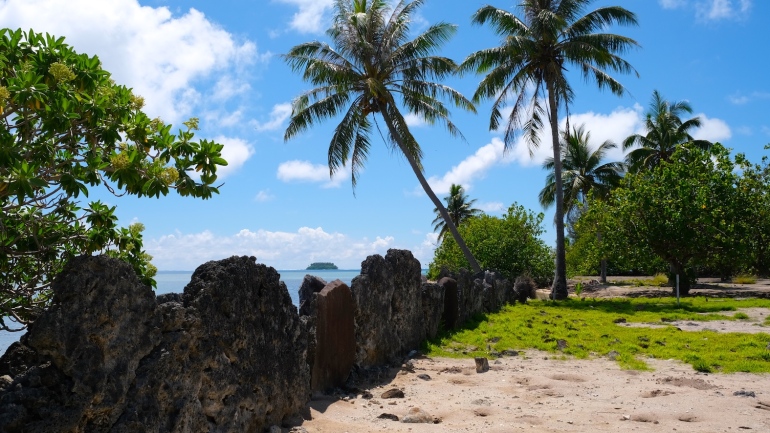 We quietly asked permission from the gods to leave through the pass for our next navigation. 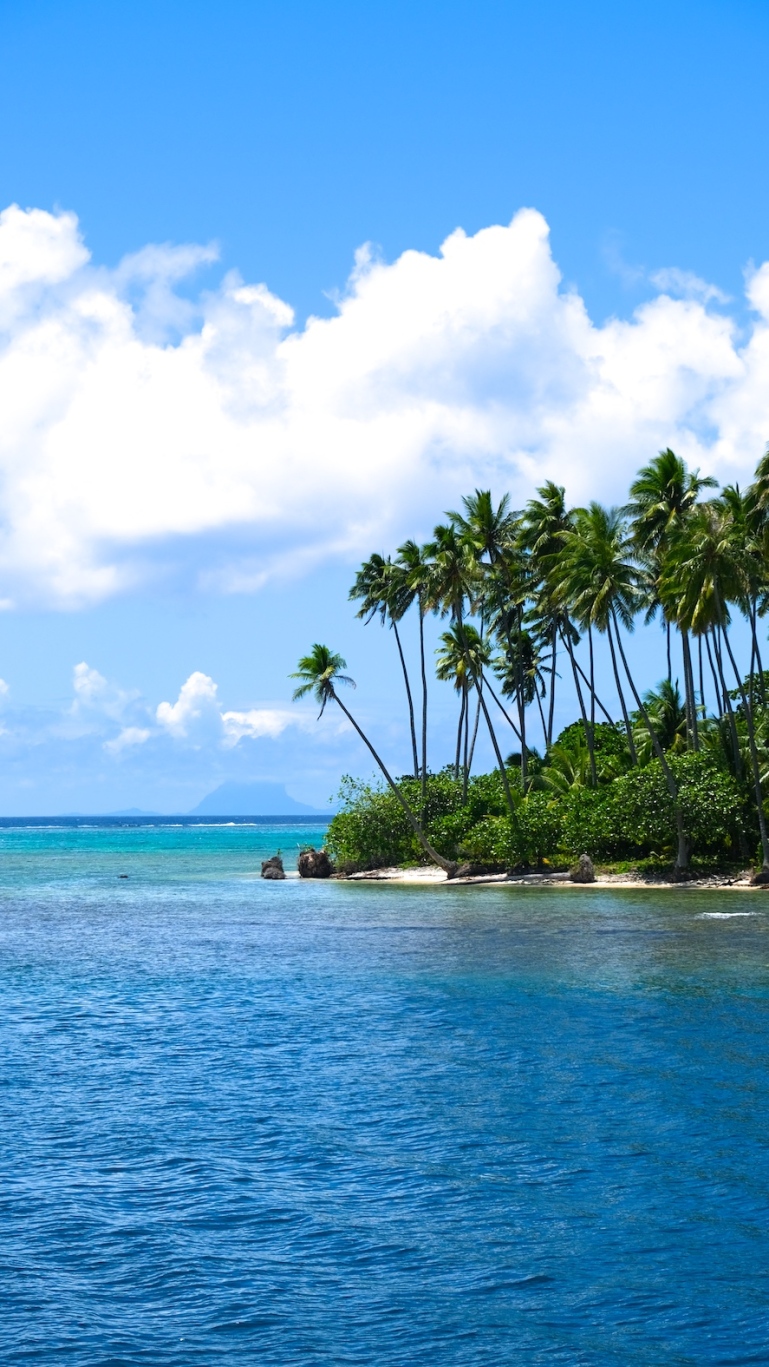 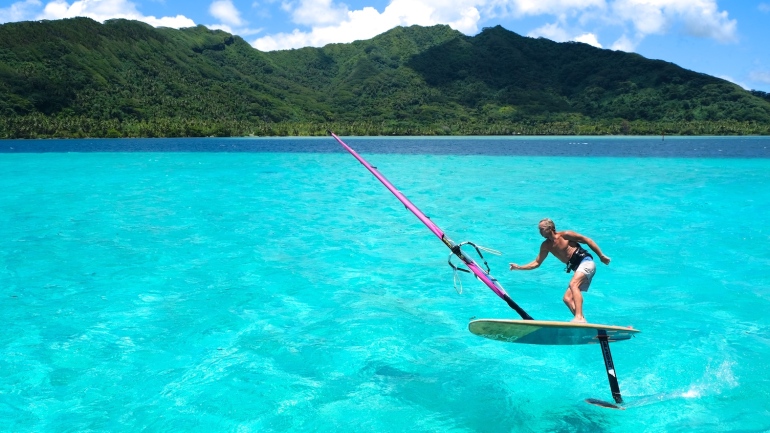