We made a quick detour to the Dutch island of Curacao, crashed into the biggest Mardi Gras carnival in the region, failed to find a blue cocktail , stocked up on fruit and veg, then sailed 400 miles North.

I was last here on a windsurf trip 25 years ago. I have fond memories of the chaotic, hispanic, tropical country where everything was cheap and easy going.
A few pesos would buy fried fish, tostones and shots of rum with friendly toothless locals in a brightly painted wooden shack with scratchy merengue on the radio. The mountains were covered in steamy jungle with potholed roads and dirt tracks.

I was looking forward to a second visit.

After a great sail and two nights at sea, we arrived at our port of entry on the south coast of DR so we could clear customs and immigration. We had chosen a convenient spot called Marina Casa de Campo, without knowing anything about it. We don’t really do marinas. This was the first time Escapade has been in one since the BVI Regatta last year.  Our berth was surrounded by huge game-fishing boats and everyone seemed to be travelling up and down the concrete jetty in golf carts. Having been boarded by officers from Customs, Immigration, Port Control, Navy, Sanitation and the Drug Squad, we set out on our Brompton bikes to explore Casa de Campo. This development is a huge corner of the country which has been securely gated and declared a private playground for wealthy folks from around the world. As well as the largest marina in the Caribbean it has four 18 hole golf courses, helipads, a polo field and hundreds of houses changing hands for up to $25 million! Not really the DR I remembered. And not really what we were looking for, but I try to remain open minded about these things and before long we were enjoying lavish 5 star dining in beach clubs and accepting rides back to the boat in a restaurant’s complimentary stretch golf cart.  All quite enjoyable after a long sea voyage, but something is missing here, I want to find the toothless guy in the rum shop, and he’s definitely outside the gates of this place.  So after a couple of nights in the most spectacular resort we’ve never heard of, we sailed away to the beautiful island of Saona off the SE tip of DR. 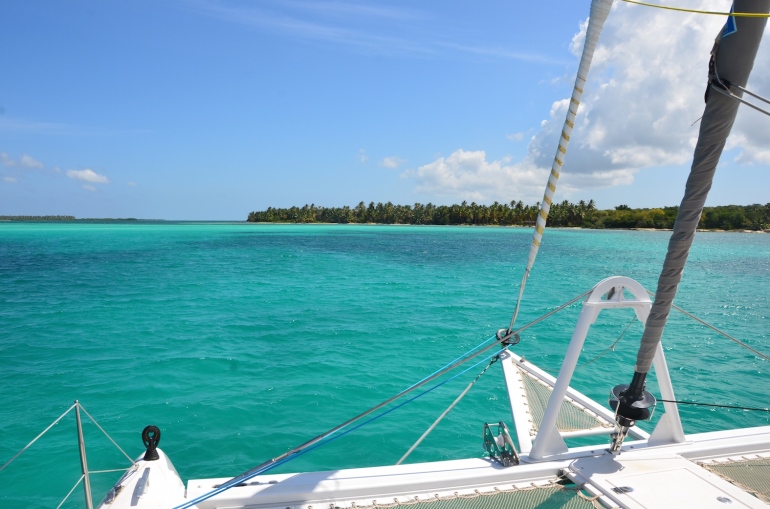 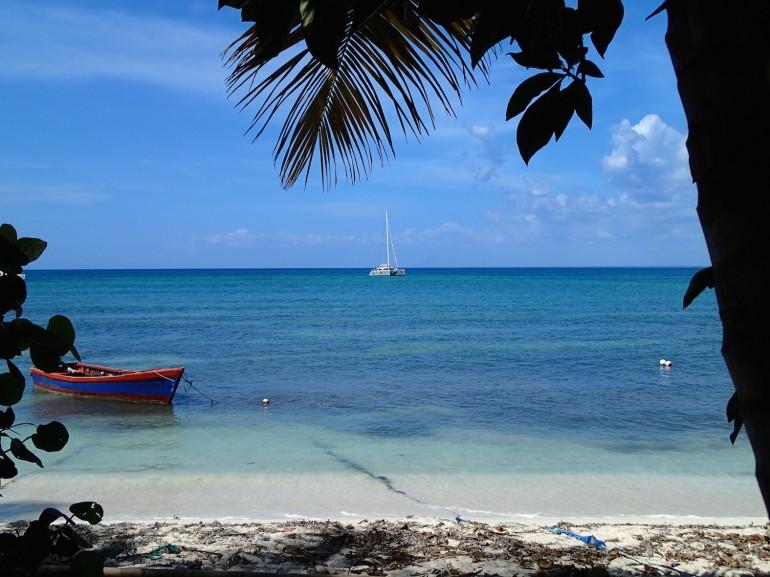 Isla Saona
A quintessential Caribbean anchorage, this blog often refers to coconut trees, white sand, turquoise water etc, well it was one of those. As the sun rose the next morning we enjoyed the tranquility, a few fishermen launching their brightly painted boats from the beach.  We drank tea and reflected on the contrast with the swanky marina.  Then the day-tripper boats started arriving.  High speed skiffs loaded with tourists came speeding through the anchorage. dozens of them, then helicopters!  Buzzing in to land on the white sand.  Saona has become a major day trip industry.  As we leave to sail along the coast there are hundreds of day boats and the desert island beach has become a busy town for the day, until they all go back to the mainland at 4pm, by then we are sailing away in the sunset.
The whales of Samana
Our next stop is the huge bay of Samana in the NE of DR, a hundred miles away, up through the Mona Passage.  We have read that for a few weeks each year humpback whales arrive in the bay.  They come here to give birth to baby whales and do a bit of breaching and tail slapping.  We are told they congregate at the mouth of the bay.  We have sailed close to whales a few times over the years and it is always a pretty intense experience.  Now we have planned an overnight sail to arrive in Samana at daybreak,  and we here are at exactly the right time of year to see the humpbacks.

Thar she blows!
Dawn wakes me at 7, I have only slept four and a half hours but she tells me we have arrived at the bay and whales are blowing all around.  I jump out of bed.
We see a few spouts, they seem to surface for three breaths, three ‘blows’ before sounding again, although we are only in 20m of water here so they are not going far.
In the low early sunlight we see a whale’s tail standing high in the water and repeatedly slapping the surface.  We sail a little closer and the performance continues.  This huge animal is doing a headstand and whacking the sea with his tail flukes causing a spectacular white water show.  We have since looked up this behaviour, it is well known in humpbacks, but still not fully understood.  That whale was using lots of energy.  Attracting a mate?  Shaking off barnacles?  Threatening catamarans?  Can’t say but it was a very impressive welcome to the mouth of the bay.

By now we had rolled the jib and were quietly sailing between the reefs at about 5 kts. Whales all around, blowing near and far, more tail slapping in the distance and occasionally leaping completely clear of the water and landing on their backs.
One of these breaches was right in front of us, we both turned in time to see the splash caused by a 20 ton back-flop.  As we neared the far side of the bay the sun was higher and lots of whale watching boats had joined us.  It was there that whales started to surface very close to us.  We think a mother and calf on one side and then the closest encounter.  I love the way whales dive, the bodies are so large and the porpoising movement seems to be in slow motion as all that seawater gets displaced.  The head appears, then the hump, all slowly rolling forward and exposing the long back and finally the tail flukes lift and the whole huge beast slides beneath the boat. 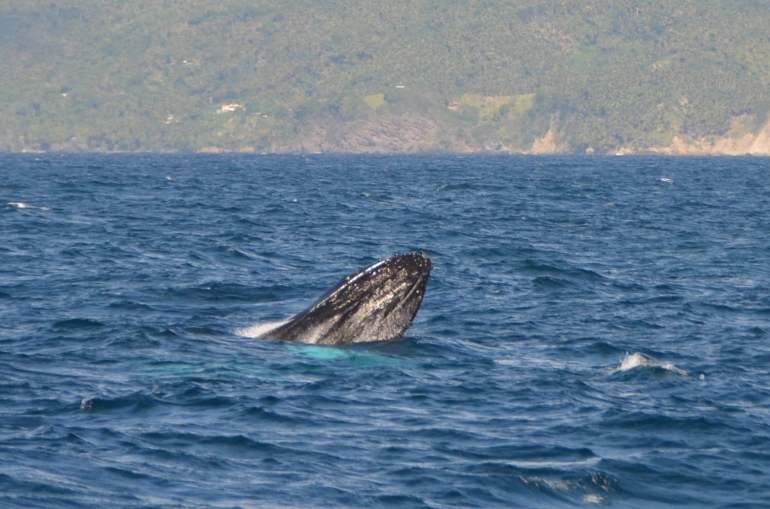 Santa Barbara
Next stop is the town of Santa Barbara where we deal with a strange interpretation of a port authority law which requires us to show our appreciation in 1000 peso notes to a large cast of local officials, some armed.  We also go on a wonderfully colourful provisioning trip to the local market in a motorised rickshaw and I have plenty of opportunities to re-aquaint myself with the authentic toothless rum pourers. 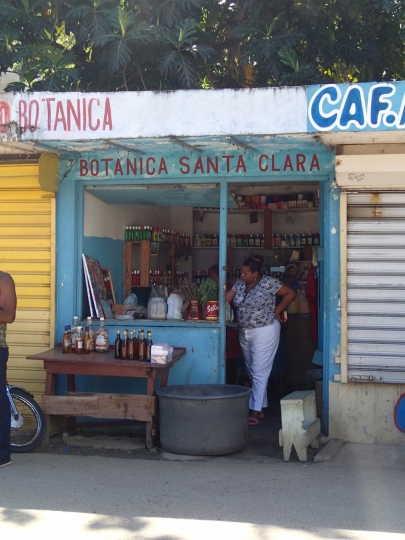 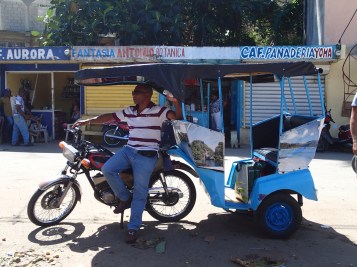 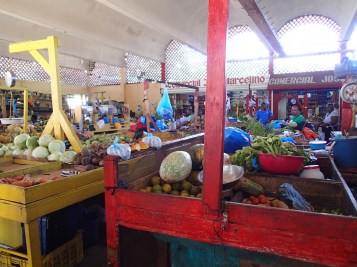 San Lorenzo
This was really something.  We sailed 10 miles across the bay and into a vast wild lagoon. We dropped anchor in the lee of jungle covered cliffs with misty mountains beyond.  Eagles and pelicans soaring above a timeless scene.  We stayed a couple of days anchored in the primordial soup.  Silence.  We explored mangrove creeks and caves, and ate our way through the huge fish I had caught on the way in.  Anyone know what this is?
Next was another overnight sail north to Puerto Plata.  We left Samana bay at sunset with the whales surfacing around us and a final send off from a pod of dolphins playing in our bow wave. 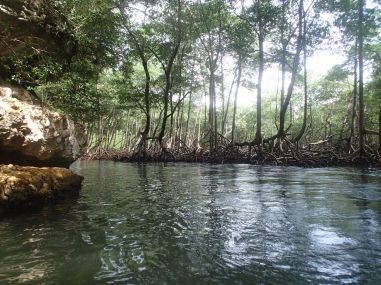 Cabarete
The windsurfing beach on the north coast and the reason for my visit all those years ago. We tied up Escapade in Puerto Plata and loaded a rented pick-up with surf and windsurf gear for the drive along the coast.  Cabarete was unrecognisable from the road.  Fully developed now with kite hotels all along the strip.  The beach is still beautiful with a mellow reef break across the whole bay.  Fun to be sailing there again and to be ashore for a few nights.
It was all just a bit too busy!   Hundreds of kites and even when Josh and I snuck off to the beautiful surf spot at Encuentro for a dawn patrol, we met a lot of surfers who had the same idea.
So back to the boat and ready for the next country.   Maybe we can find some slightly less crowded waves at our next stop?  We set sail for the Bahamas. 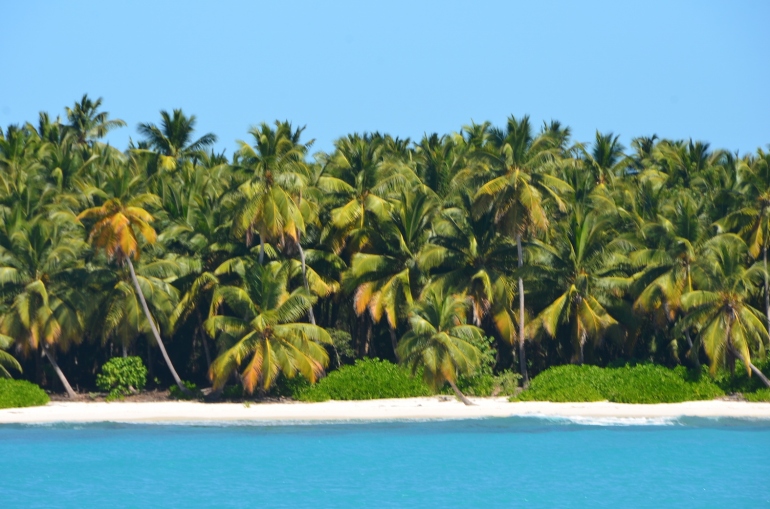