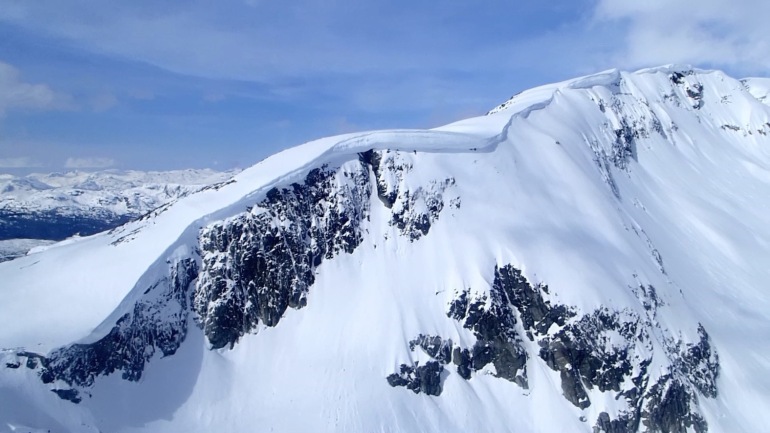 9th April 2016
So Escapade is tied up safe in Turtle Cove Marina, Providenciales, Turks and Caicos Islands.
Now for the first time in months we have to deal with the traumas of:
Long trousers
Socks and shoes
Airport security lines
Large scale human transportation in Easter holiday season.
But it’s worth it!
Our first trip to Canada.
Crisp mountain air, our good friends from Guernsey and our first snowboard turns for two years.  Whistler and Blackcomb mountains are a vast playground.
There is even an April snowstorm!  So refreshing to be riding through a blizzard.  Even better the next day waking up to blue skies and a foot of powder at the top.  Hiking up from the top lift to drop in to the Blackcomb Glacier Bowl with Tony and Gill.
Then the ultimate treat of touring the untracked peaks of British Columbia on a heli-skiing trip.

Heli Guilt
I don’t really agree with heli-skiing.  Maybe I’m an old boat-dwelling hippy, powered by wind and solar, but it just doesn’t seem right these days, does it?
Helicopters are obscenely loud, violently chopping the air and spraying aviation exhaust all over an otherwise silent and pristine wilderness.
I imagine the local bears and elk view them much as I would a jet-ski in a quiet anchorage.  A rude intrusion to the natural peace of their winter in the mountains.  The French thought so and banned it completely in their Alps.
It is a very expensive and elitist way for those who can afford it to experience real back country skiing, without exertion.  How many heli guests would have the fitness to climb a slope with skins?
So I have mixed feelings, and it will all probably be banned soon, as a disastrously hedonistic waste of jet fuel.  But for now, for the lucky few, a helicopter is still the ultimate ski lift.
It takes you in to high mountain terrain and spits you out at the top of your powder daydream.  My first hell snowboard trip was in Alaska and I had more untracked riding in a week there than the whole of the previous 10 years.
Even for those with a healthy adrenaline-appetite, it starts to feel a bit gluttonous.
But here we are in Whistler, I mention some of these concerns to locals while chatting on chairlifts.  They assure me that BC is so vast that there are plenty of quiet spots for bears to sleep peacefully outside of the relatively tiny area licensed to the heli-operators.  The smooth talking concierge at our hotel studies the weather forecasts.  Snow is falling.  He predicts conditions on Thursday will be heli-skiing perfection..

Thursday
Tony and I arrive at the heli base and meet the group we will be flying with.  The sky is blue and spirits are high.
We spend the morning learning how to ride out an avalanche, find each other when buried under a slide, how to use the transceivers, probes and shovels in our backpacks.
Reassuring words from our guide: “I have NEVER had to dig out a skier on one of these trips.  And this is my second week on the job..”  Funny man.  Next we learn how to get in and out of the helicopter, not get our heads chopped off, how to escape from an overturned aircraft in the snow in the unlikely event that we survive a crash.  Our group has gone a bit quiet.  Finally we are loaded in to the helicopter and off we go.  It’s spring weather down in the valley, rivers gushing through the trees, but as you climb up into the world of high mountain peaks, it’s winter again.
A beautiful day.  Thousands of metres of descent through virgin snow.  It was so good.  I was laughing out loud whilst floating from turn to turn.  If you like that sort of thing, go heli-skiing quick, before they ban it. 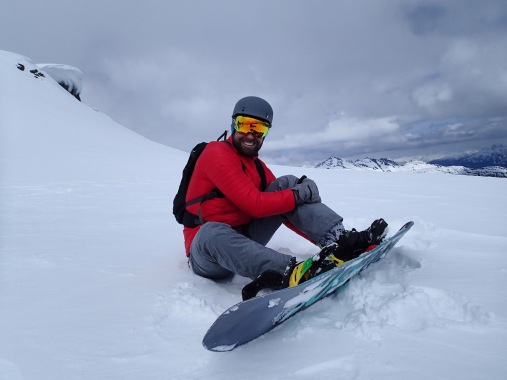 Airtime
Meanwhile back on the groomed slopes of Whistler, I can’t  help notice how ridiculously radical skiing and snowboarding have become lately.  The ‘snow park’ used to be a little place on the side of the piste where the teenagers hung out, right?  A sort of novelty obstacle course, I never really took much notice.  Now it seems to be the whole mountain!  And those ramps have got huge!  The aerial antics of the pros in Red Bull helmets are terrifying, but it’s not just them, everyone under the age of 30 seems to spend more time rotating above the mountain than riding down it. The teenagers in our group from Guernsey were getting coached to a high technical level and progressing so fast. Nobody seems interested in carving turns anymore, it’s all about park skills, rails, boxes, kickers and big, big air.  Impressive. 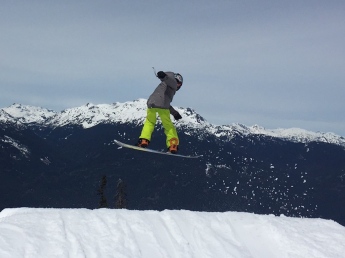 End of Season
Can’t believe how good the snow still is in the middle of April, but down in the village folks are sunbathing by the pool.  Trees are in leaf, the lifts are closing. There is a music festival, the young seasonaires of Whistler are enjoying end of season parties, all night DJ sets, fancy dress ski days and the hilarious ‘Silent Disco’ (gate-crashed by Team Guernsey).  So happy that we grabbed the opportunity to get some mountain time, in the last gasp of Canadian winter.  Thanks again to Team Tostevin for dragging all our gear there and back.  It was great to be with you all up there. 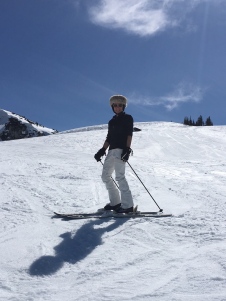 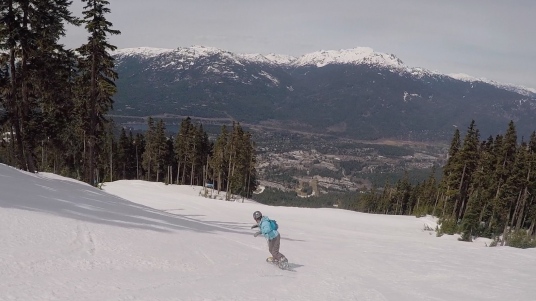 Back to reality
After 9 days in snowboard boots its great to feel our bare feet  on the warm decks of the boat.  Mine are straight back into the footstraps of my windsurf board. There’s a good swell on the reef and I have the warm waves to myself again. It’s good to be back!