23rd April 2016
The boat has been in Providenciales for a month now while we did some maintenance, sailed with Tony and Wendy, then went to Canada and back.  We feel quite at home here now, but we think that there must be more to the Turks and Caicos Islands.  Provo is fun but it’s a real tourist island.  We decided to explore a bit before we move on.  First stop was a quiet reef pass a few miles away.

The wind was light so we unrolled the jib and sailed slowly just outside the reef where the water depth drops off from 5 to 500 metres.  I was trolling my new lure, a huge hook tucked inside a cylindrical cedar wood ‘plug’.  The boat was only doing about 3 knots when the ratchet on the reel howled as the line spooled off like we’d snagged a powerboat going the other way.  Fish on!
I eased the rod from its holder and felt the fish kicking hard.  The low boat speed definitely helped win the fight as we finally brought the big silver flash alongside where Dawn smoothly gaffed him through the gills and flipped him into the open fish locker.  Wahoo! That’s a legit ‘Game Fish’.  Except it didn’t quite fit!  That locker measures 110cm diagonally and the Wahoo’s tail was sticking out, so we think that’s our biggest catch yet. 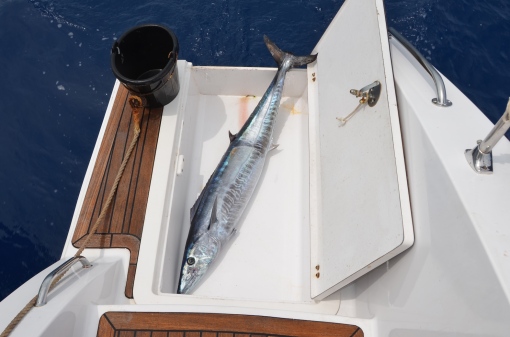 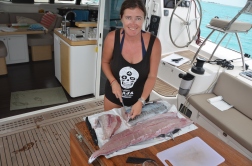 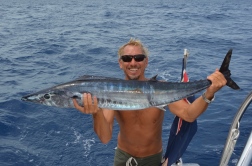 The two big islands of North Caicos and Middle Caicos are surrounded by very shallow water with no anchorages, so we took the dinghy round Parrot Cay and went ashore to meet the natives in a clapped-out rented Jeep.
Feels a bit more like Out-Island Bahamas over here, tiny populations and a church every half mile.  As our host at the wonderful Last Chance Bar said to us: “You’ll like it better here than Provo, there’s much less to do”.  I think I know what he means. 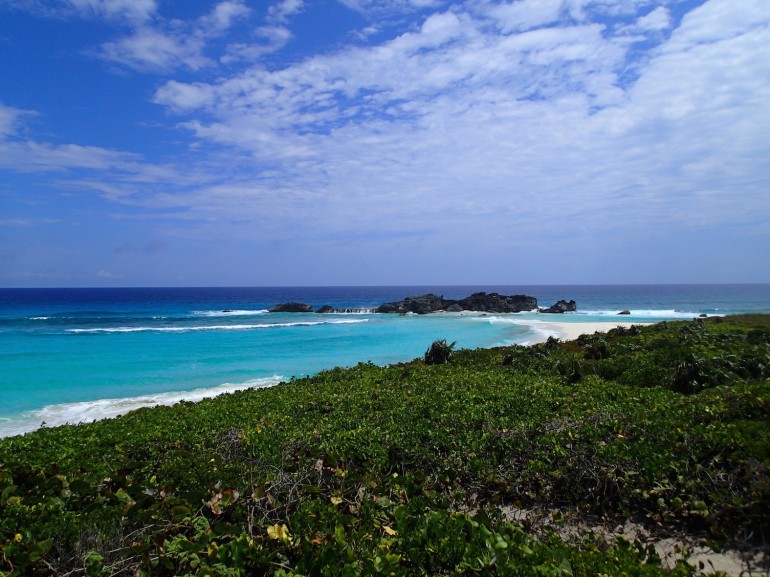 Back on board we had to sail 60 miles from Pine Cay to the next tenable anchorage off Cockburn Harbour in South Caicos.  Here I went ashore in my running shoes early one morning, without map or water, and got lost for hours down the dirt tracks with wild horses and donkeys for company.  The sun was far too high by the time I made it back, dehydrated from my accidental South Caicos Half-Marathon. 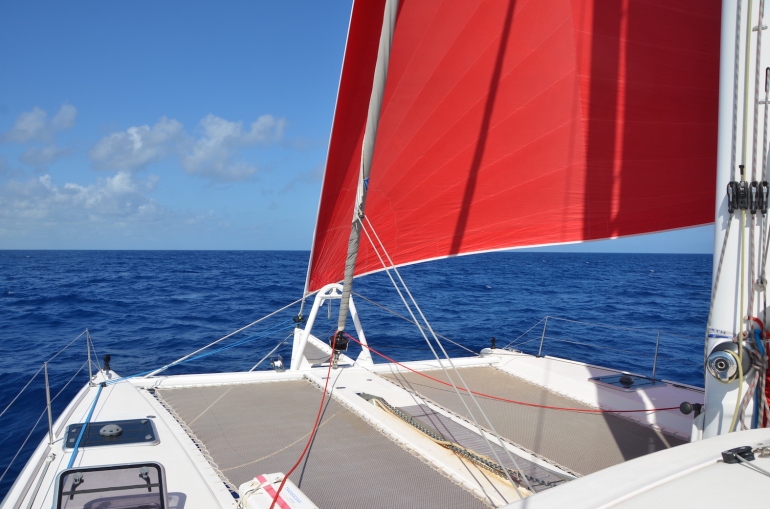 We cleared customs at Cockburn Harbour and sailed away to the tiny, uninhabited Southern Cays (pronounced Keys, as you know), Long Cay, Six Hills Cays and the Fish Cays.  Now that’s more like it, we sailed between deserted turquoise anchorages far off the beaten track.  Rocky islands covered in prickly pears and crawling with iguanas.  White beaches and colourful reefs, we’re back in free diving mode. 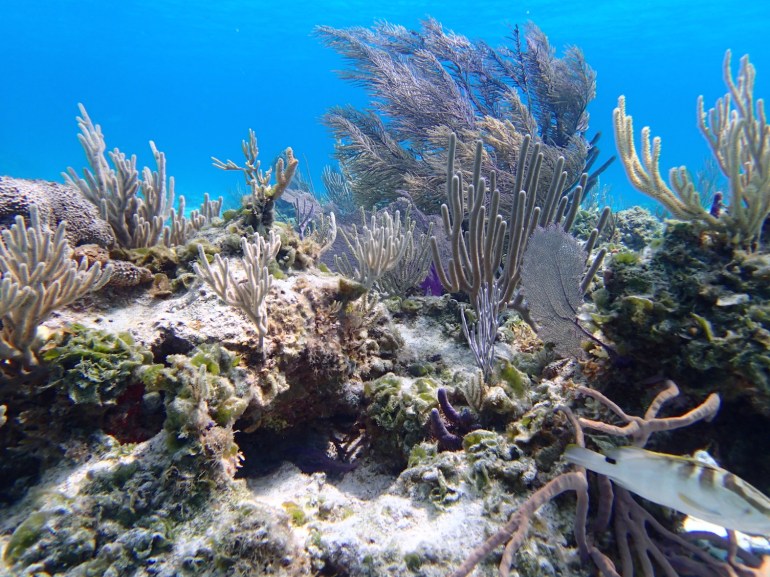 We’ve spent some time this winter looking for (and finding) these remote places and it’s still such a joy to be living on the only boat in sight, with our own private island, where we can fish, swim, turn up the music, eat, drink and be merry.  Talking of eating, looks like it’s wahoo fillets again tonight.. 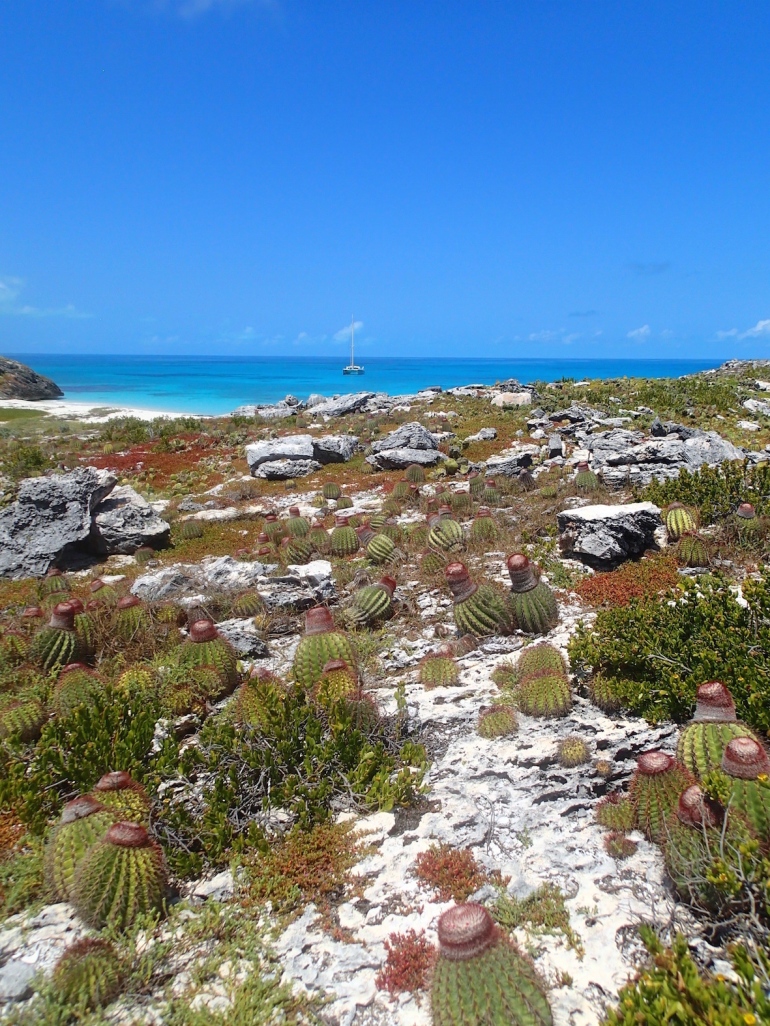 Turk’s Head
Apparently the ‘Turks Islands’ are so named because of this cactus, which appears to be wearing a fez, like a ‘Turk’s head’. 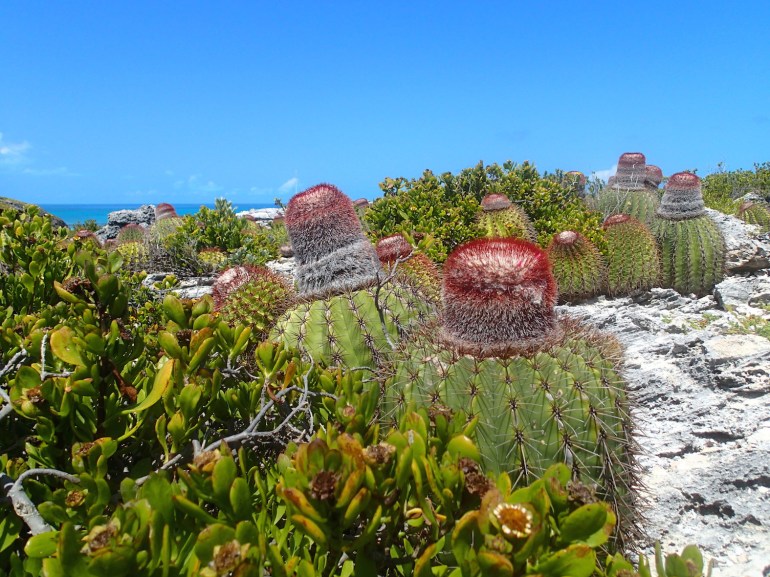 29th April
Today we crossed the Caicos Bank from Ambergris Cay to French Cay, about 40 miles across a huge enclosed swimming pool.  It is surrounded by islands and reefs, the enclosed area is no more than 3 or 4 metres deep.  You can safely anchor for the night out here, out of sight of land!  40 miles across a flat turquoise sea with the shadow of the boat just below us on the white sand bottom.  We were joined by dolphins from time to time, they would swim with us for a few laps of the boat before fading away.

30th April
We left French Cay at first light and said farewell to the Turks and Caicos.  We hoisted the big red gennaker and Escapade slipped away in the light breeze, over the end of the turquoise bank and in to the deep blue water beyond.  We had finally finished off the wahoo fillets so it was time to go fishing again.  I was quite pleased with the new cedar plug so we dragged that behind the boat all morning with not so much as a nibble.  Maybe that wahoo was a fluke catch.  Then at high noon we had a big strike.  I carefully adjusted the drag setting on the reel as the rod bent double and the fish ran hard.  Dawn singlehandedly eased and furled the 90sqm gennaker to slow the boat while I watched the last few metres of line running off my reel, nothing I could do, if I increased the resistance the line would snap, if I did nothing it would snap anyway in about 5 seconds, the fish was just too big for this gear.  I have been considering an upgraded reel with more line capacity and drag control, for just this situation!  So I thought all was lost: the fish, the hook, the cedar plug and 500 metres of line, but then the fish just stopped, with only a few turns of line left on the reel, I pulled the rod up and was able to wind some line back on.  The fish was tired!  So was I by the time I had regained all 500 metres, 20 minutes later.  As the fish neared the boat the bill broke the surface, a marlin?  A narwhal?  We finally hauled the extraordinary creature in to the fish locker.  A long spike from the snout, a giant flapping dorsal fin and a huge powerful tail.  This one definitely didn’t fit in the locker. A 1.7 metre long sailfish.

So the fridges are loaded with fresh fillets again and the trusty cedar plug is back in the tackle locker.  It has only been in the water twice and has delivered 2 big game fish and all the protein we need for 2 weeks!

1st May
We are back in the Bahamas.  Anchored off a deserted 5 mile beach on the western shore of Little Inagua.  The island is about the size of Guernsey, inhabited only by birds and lizards.  This place is rarely visited by boats and we are completely alone here.  The water is beautifully clear and the beach is littered with shells and coral.  There is an untouched feel to the place, fish swim up to you, curious, not used to having humans around.  The night sky is dark and we can watch glowing jellyfish and squid swimming round the boat.  Behind us is a 500m strip of shallow water over white sand, studded with colourful coral heads, then the depth plunges to the deep, deep blue of 1000 metres. We float out over the drop-off with snorkels,  that dark blue gets a bit spooky. An awe inspiring place to free dive, free fall in to the abyss!

On one dive to a deep section of reef close to the edge, at around 15 metres down I encountered the biggest Nassau grouper I have ever seen. I don’t think much spear fishing goes on around here, the fish are fearless and relaxed.  I got to within a few feet of the grouper, which was about the size of a golden retriever, he seemed quite pleased to see me. Well within range, happily for him I was unarmed. I have been banned from killing anything else until we’ve eaten all the sailfish.
We had planned to sail off again this morning but just couldn’t tear ourselves away.  Little Inagua is the Garden of Eden. We’re staying.  Sailfish curry anyone? 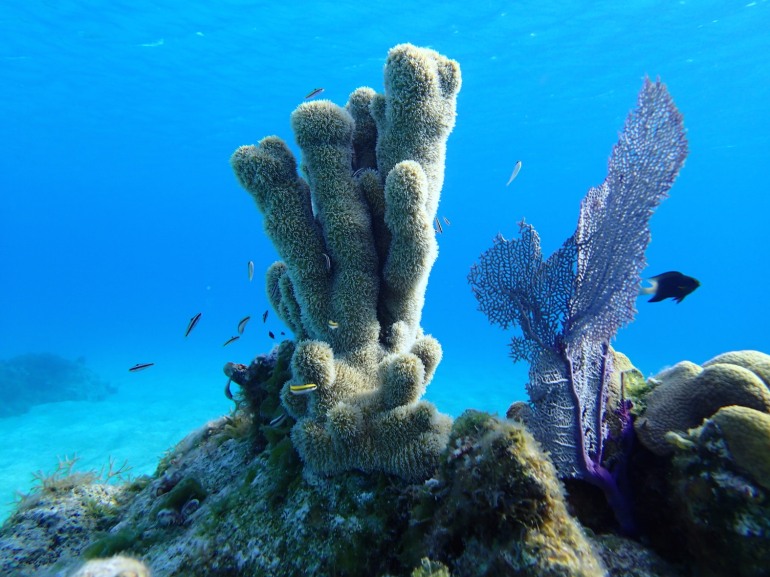 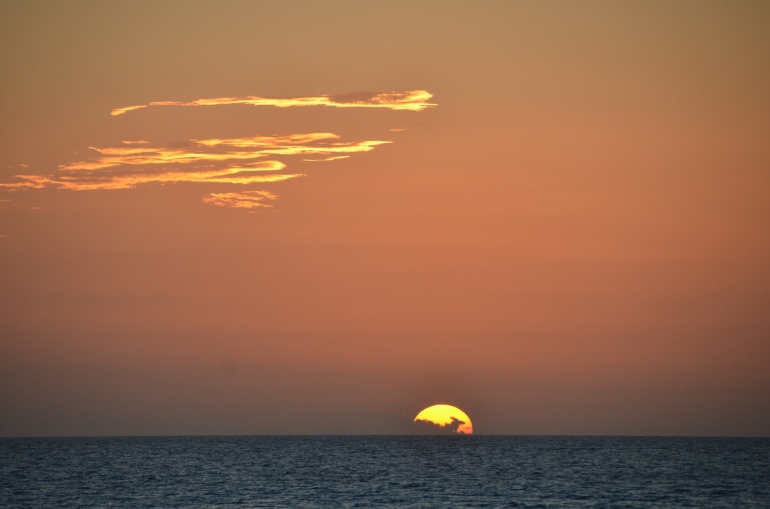 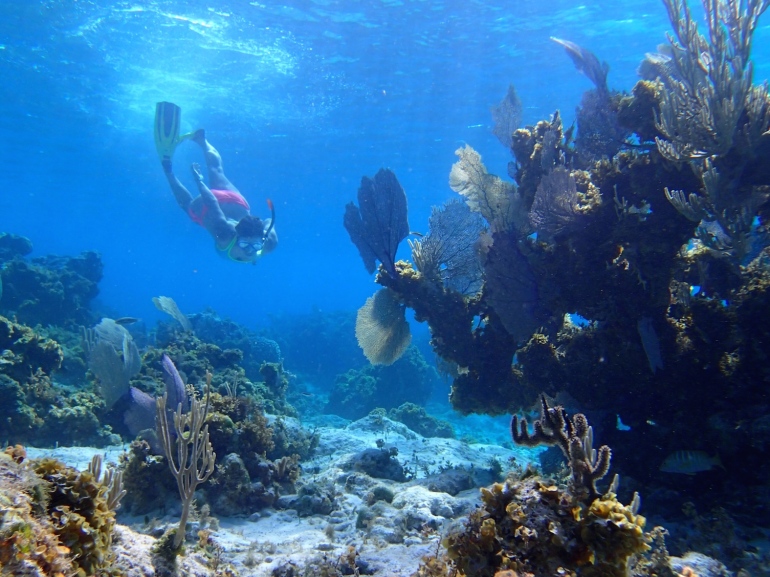